Ramaphosa ignores critics as he talks up SA’s prospects

Ramaphosa ignores critics as he talks up SA’s prospects

There is still much to be hopeful about despite all the negatives, says the president 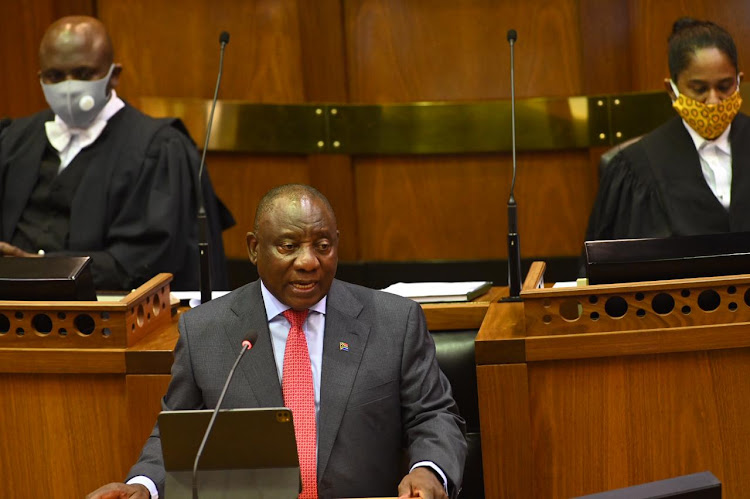 President Cyril Ramaphosa responds to the debate on the presidency's budget vote on Thursday.
Image: GCIS

President Cyril Ramaphosa ignored attacks by opposition parties and instead urged South Africans not to lose hope, saying the country was on its way to recovery.

Ramaphosa was responding to Wednesday’s six-hour debate in the national assembly over the presidency's budget vote.

Opposition MPs were scathing. They questioned Ramaphosa’s character, dismissed as a myth his commitment to cleaning up corruption — likening him to a master myth maker — and claiming that SA was as good as a failed state under the ANC government.

Ramaphosa said on Thursday: “Some may offer sincere and constructive criticism. Some may offer only insults. But as this presidency, we are determined and willing to join forces with all those in this house and all those across society who want to see SA recover, grow and thrive.”

Ramaphosa acknowledged that debate on the presidency had been “lively and robust”, and a demonstration of SA’s vibrant democracy with its diverse perspectives.

In his response, he focused on highlighting the government’s achievements, saying many of the things that were happening in the country were positive.

He acknowledged there were areas of public life where the government had made a decisive break with the apartheid past, but the country’s divided and violent history continued to live on in the lives of many South Africans.

He said it was true that five million subsidised houses and housing opportunities had been provided for the poor since 1994, but still millions of people live in informal settlements.

It was also true, he said, that the proportion of homes with access to water had increased from around 60% in 1994 to 88% today, but still many did not have access to a reliable supply of water or sanitation.

The president said it was also true that the murder rate per capita had nearly halved in the past 25 years, but still communities were ravaged by crime, gangsterism and violence.

“It is true that six million more people are employed now than 25 years ago, but it is also true that in the first quarter of this year the unemployment rate in our country reached its highest level ever.

We are now seeing signs that the focus of this administration on economic reform, which began before the pandemic, is steadily but surely paying off.

“This reality demonstrates the enormous burden of our fractured past, of the depth of deprivation, disempowerment and deliberate neglect. It demonstrates how difficult it has been to break the cycle of poverty.”

Ramaphosa said it was equally important to recognise the democratic government’s weaknesses and shortcomings and how they had hampered the task of building a new society and achieving a better life for all.

“We must, as we have done, acknowledge that there have been failures of governance in several municipalities, in departments and in state-owned entities.”

The most debilitating of factors had been corruption, nepotism and patronage in many parts of the state and the private sector, he said. This was because it deprived the poor of resources that were rightfully theirs and starved the economy of investment because those who would have wante to invest in our economy were kept away by the stench of corruption.

Ramaphosa said while SA had suffered great devastation from Covid-19, it was seeing some green shoots of recovery.

“We are now seeing signs that the focus of this administration on economic reform, which began before the pandemic, is steadily but surely paying off.”

As a result of the Covid-19 devastation, the country was starting from a low base, but economists and agencies had adjusted their growth projections for SA, including the International Monetary Fund, which had revised growth upwards from 2.8% to 3.1% for this year.

By a number of indicators, economic activity was also returning to pre-pandemic levels at an encouraging pace, added Ramaphosa, including that the rand was at its best levels since 2019 and outperforming currencies of SA’s major trading partners.

He acknowledged this was being helped by high commodity prices. “Our favourable position as a commodity producer should attract capital inflows and boost the fortunes of domestic producers as well as retailers,” he said.

He said he was “very heartened” by the words of IFP parliamentary leader Mangosuthu Buthelezi, who said, “In these dire circumstances we will be doomed if we abandon hope.”

PODCAST | Are we living through the decline of the ANC?