Township is known for such incidents, but the sheer scale of the latest has community leaders reeling 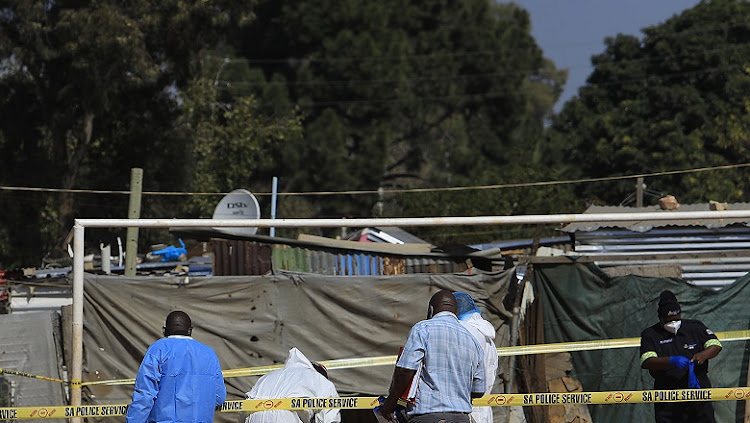 Police comb through the crime scene for evidence after the attack on nine youths in Zandspruit early on Wednesday.
Image: Alon Skuy/Sunday Times

Mob justice is not uncommon in Zandspruit, Johannesburg, but it has never reached a point where more than one alleged assailant is killed at a time.

Four men were killed and five others critically injured in an alleged mob justice incident at about 2am on Wednesday.

“They always burn one person, not one, not two, not three and not nine like it happened today. I’ve never seen this happen before in 27 years of living in Zandspruit,” said Lekalakala.

“I’m shocked. I am worried about what is happening here. We do not know what is going to happen tomorrow.”

Police spokesperson Capt Kay Makhubele said a group of about 200 people went out to search for youths who were allegedly robbing people in Zandspruit.

Day in and day out, there is a criminal act committed in Zandspruit. The crime [rate] is high and the community has resorted to taking the law into their own hands.

The youths were taken to a field, where they were assaulted and set alight.

Police are searching for the culprits.

Commenting, EFF branch secretary Gift Mkasi said: “Day in and day out, there is a criminal act committed in Zandspruit. The crime [rate] is high and the community has resorted to taking the law into their own hands.”

Mkasi spoke out against the violence. “As the EFF, we condemn any crime. If someone has done something wrong, they should be reported to the police. No-one should take the law into their own hands. It is a crime and a barbaric act. We do not support it.”

Lekalakala said: “I get complaints [about crimes] every day, but they did not tell me they knew these people. If they had told me, I would have assisted in getting them arrested.”

He said he did not recognise the youths who had been burnt. “These ones I do not know. I am aware of a tall guy and two short ones. I know that any time they go to shops they do what they want.”

Relaying the events that led to his knowledge of the incident, Lekalakala said he heard whistles at about 4am.

“Later, by 7am, there were a lot of people around here. When I came here, there were nine boys and everyone was using whatever they could to hit them.

“They said these guys go to their houses during the night and rob them. If they find you sleeping with your wife or girlfriend, they remove you from the bed and rape them. They do this as a group.”

He said the men were apprehended when the community patrolled the township.

“They decided to patrol last night until they found one [man] from Cosmo City.” He said among the victims were residents of Zandspruit and Diepsloot.

There were thousands of people. Even those who were going to work stopped to see what was going on.

“They caught one guy who showed the community the rest of his friends he was stealing and robbing with.

“They pointed to one guy who was selling crystal meth in Zandspruit. That thing is poison in Zandspruit,” Lekalakala said.

He said he was chased away by the violent community group because he is part of the CPF.

“There were thousands of people. Even those who were going to work stopped to see what was going on.

“They burnt tyres using petrol and put them around the guys’ necks.”

Lekalakala said he did not attempt to stop the group from burning the youths as there were too many of them.

“I could not face the large group alone. They could have attacked me.”

A tyre that was around the neck of one of the victims caught fire again as forensic personnel removed it.

ANALYSIS | No place to run: Mbete unmasks herself as ‘Zuma enabler’