Of SA jobs lost, only a quarter were due to lockdown itself: ...

Of SA jobs lost, only a quarter were due to lockdown itself: experts

UCT study finds that other pandemic-related factors, particularly affecting the most vulnerable, had far more of a role 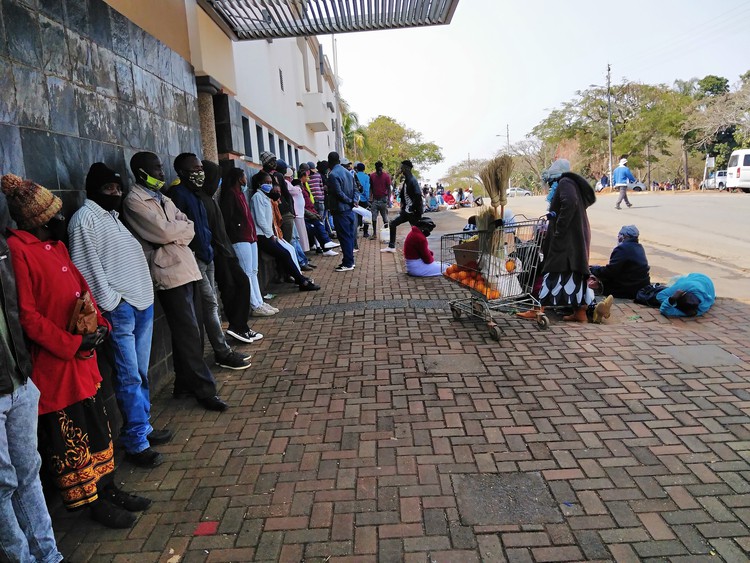 LONG WAIT Social relief queues, such as this one outside the Makhado post office, stretched for kilometres as millions of South Africans were plunged further into poverty because of the Covid-19 pandemic.
Image: GroundUp/Bernard Chiguvare

In the first two quarters of last year, 10 years of job growth in the economy were erased by the Covid-10 pandemic.

However, contrary to population perceptions, only a quarter of the 2.2 million job losses were due to the lockdown. The rest were due to other pandemic-related factors.

This is according to in-depth research carried out by the Development Policy Research Unit at the University of Cape Town.

Tom Köhler, speaking about the findings made by himself, Haroon Bhorat, Robert Hill and Ben Stanwix, said: “We found the national lockdown decreased the probability of employment for those not permitted to work by eight percentage points relative to the control group.

“We can approximate that of the 2.2 million fewer people employed, SA’s lockdown policy directly accounted for just under 600,000 (or 26%) of total jobs lost, suggesting most job losses can be attributed to other pandemic-related factors.”

Examples of other factors are mortality and morbidity, consumption-related behavioural responses (like aversion and fear), as well as domestic and foreign policy which affected supply chains.

Only a partial recovery can be observed in data from the third and fourth quarters of the year, with net employment still down 1.4 million relative to pre-pandemic levels, the researchers found.

They said that, as in many other countries around the world, “the SA government quickly implemented a relatively stringent national lockdown” in response to the pandemic.

Since then, different studies have looked at the economic effects of this, but they have not distinguished the extent to which job losses resulted from the lockdown itself, or from other pandemic-related factors.

To this end, the researchers wanted to “isolate and provide causal evidence” of the lockdown in particular.

Examples of other factors, according to Köhler, are mortality and morbidity, consumption-related behavioural responses (like aversion and fear), as well as domestic and foreign policy which affected supply chains.

“Although the pandemic continues to pose important risks to public health, SA’s lockdown was always expected to lead to substantial short- and long-term economic costs,” said Köhler, but “these costs have been disproportionately borne by several vulnerable groups, such as less skilled, low-wage, informal and female workers”.

He and the team found the lockdown “particularly jeopardised the livelihoods of those in the informal sector, with an estimated effect nearly three times larger than the overall effect”.

The fact that informal workers – who make up around a quarter of the overall workforce – were so badly affected makes a governmental response difficult.

“The vulnerability of this group to the economic consequences of the pandemic is of concern, given that their informality presents a challenge for government to provide targeted relief. To prevent further widening labour market inequalities, our analysis emphasises the importance of effective policy to support the livelihoods of those in the informal economy,” said Köhler.

The informal sector has also seen a much lower bounce-back.

“By the end of 2020, although the number of job-seekers had returned to pre-pandemic levels, with employment remaining significantly lower and inactivity higher, only one third of jobs lost in the informal sector had been regained,” said the researchers.

The youth – already in a vulnerable position as they made up only 36% of total employment before the pandemic – “accounted for just over half of all jobs lost” in the first two quarters.

Active job-seekers were reduced by 40% during the stringent lockdown, while more than five million people became economically inactive.

As rumblings of a third wave of Covid-19 infections make themselves heard, both citizens and government are left wondering what can be done to prevent it.

Köhler said “lockdown policy still matters and plays a role”, but he added that around 600,000 job losses is a substantial figure that matches the financial crisis of 2008.

However, he reiterated, it is instructive to remember “only 26% of the job losses” resulted from the lockdown itself.

EDITORIAL | The choice is Ace’s. Will he choose the frying pan or the fire?

Covid catastrophe: no-fee school pupils learnt up to 75% less in 2020