Municipality calls it ‘desperate headline-grabbing’, but organisers are happy they brought attention to the problem 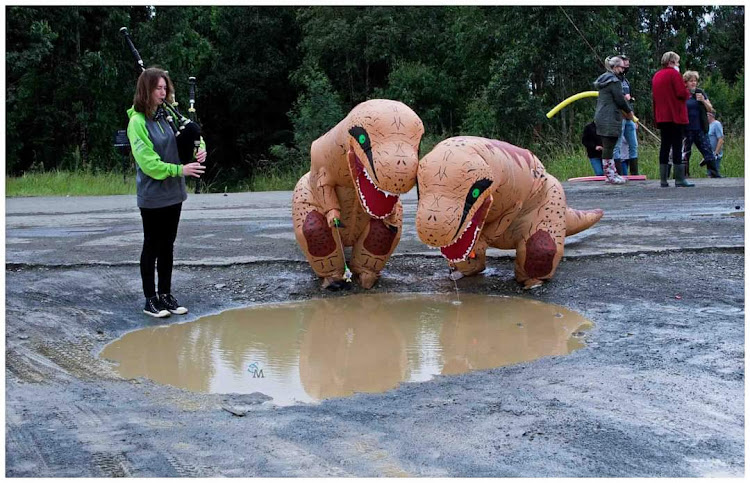 I DINO WHAT WE'RE DOING HERE Everything from dinosaurs to bagpipe players participated in the Curry's Post Conservancy pothole fishing competition in the KwaZulu-Natal midlands at the weekend
Image: Supplied

Yellow rubber ducks, a bagpipe player and dinosaurs made an appearance at a tongue-in-cheek “fishing” competition held at the weekend on a road ridden with potholes in the KwaZulu-Natal midlands.

The competition was the brainchild of Curry’s Post Conservancy member Kemsley Wood, who wanted to draw attention to the pothole problem and help raise funds for a clean-up project initiated by the community.

For a R20 donation people were allowed to cast their fishing rods into large potholes which have made driving conditions on the road treacherous. 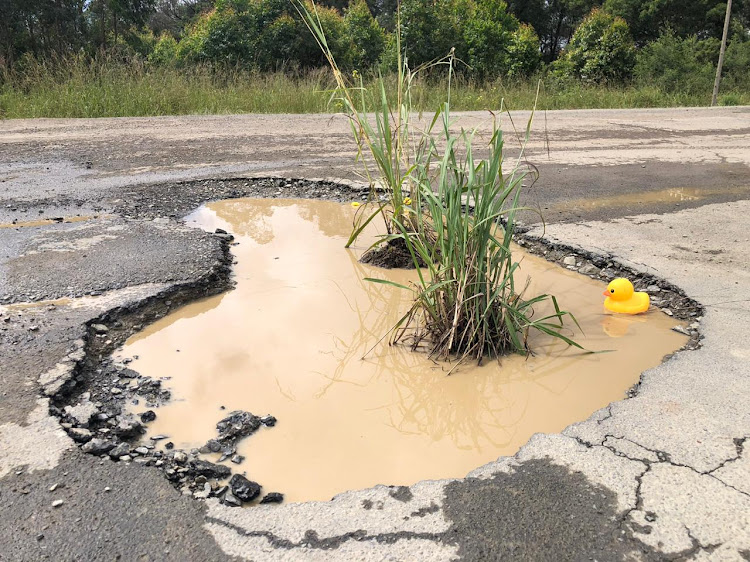 Two community members raised laughs in their dinosaur costumes while a bagpipe player entertained the locals with tunes.

“As a community we initiated a Curry’s Post Conservancy clean-up project. We wanted to employ local staff to clean the road, pick up the litter and cut the verges, generally tidy up the spot,” said Wood.

“We needed funds to do that so I came up with the idea of a pothole fishing competition."

Wood said the community was keen to pitch in to clean up their surroundings. 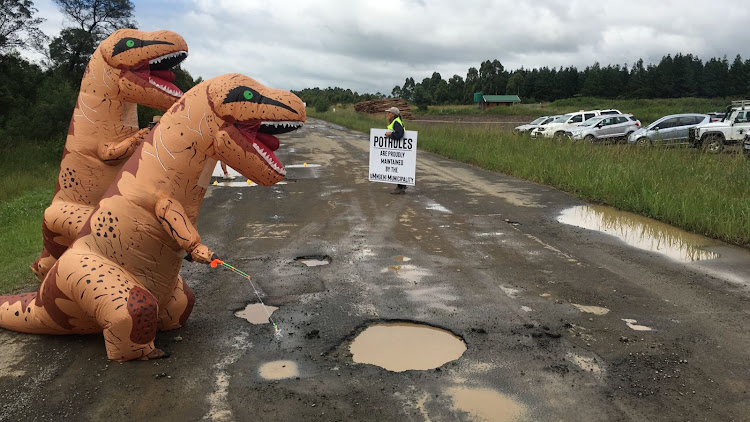 SIGN OF THE TIMES Who said dinosaurs can't try their hand at fishing? It was all in jest to raise awareness about the pothole problem in the Curry's Post area.
Image: Supplied

“We can’t wait for the municipality to do stuff. We’ve got to do stuff ourselves where we can in terms of tidying up.

“Unfortunately fixing potholes is out of our expertise. You can’t have amateurs doing professionals jobs.

“We were not too successful in raising funds. Things are tight and people don’t have spare cash, but the awareness has been a major success.”

He is not sure whether the awareness drive would propel the fixing of the potholes.

“We are not sure. It is early days. We’ve had no engagement with uMngeni municipality. Hopefully this will make things happen,” said Wood.

IN THE PINK Younger members of the community also participated.
Image: Supplied

In a lengthy statement, the municipality accused the local wing of the DA and “probably its members” of being behind the “poorly orchestrated and desperate headline-grabbing activity”.

It said parts of the Disaster Management Act had been flouted with the consumption of alcohol in public, the non-wearing of masks in some instances and the gathering of people which was prohibited before President Cyril Ramaphosa eased restrictions on Sunday night.

The municipality said phase one of pothole repairs had commenced but was delayed because of heavy rain.

“After the rains subsided work has been ongoing on the same road that they were selective on.

“The council approved further funding that will be utilised for further pothole repairs, including phase two of pothole repairs on the same road during the tabling of its adjustment budget on 24 February 2021.

“Moreover, the municipality has allocated funds to resurface 3.5km of road through its adjustment budget amid the challenges that led to the downward adjustment of the original budget adopted in June 2020.”

EDITORIAL | Court applications aside, the vaccine rollout must be ramped up

The bee’s knees! Cat back on her feet after groundbreaking op