Ever wondered if SA teachers regret their career? Here are the ...

Ever wondered if SA teachers regret their career? Here are the numbers 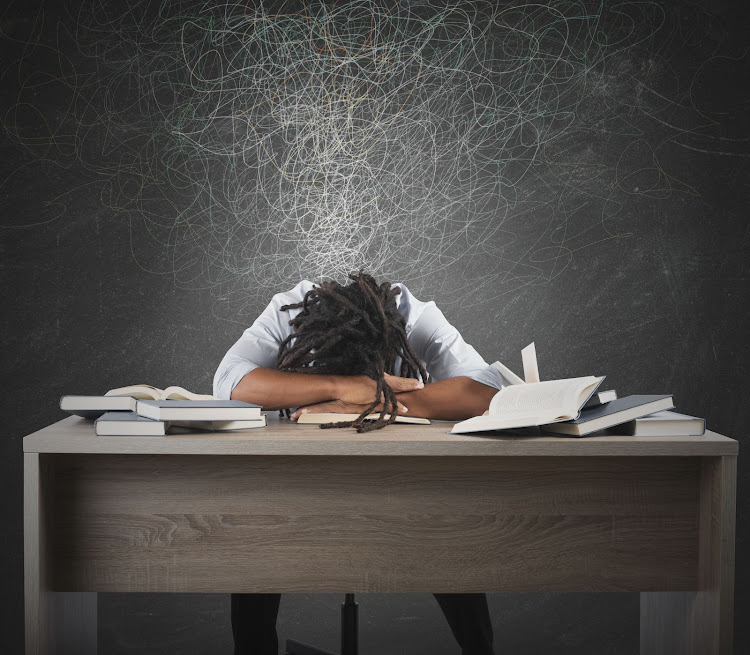 'If I could do it all again' While 18% of SA teachers regretted becoming educators, the OECD average was 9%.
Image: 123RF/alphaspirit

One in five teachers in SA regrets being in the profession.​

This is one of the key findings of a global study involving 260,000 teachers from 15,000 schools in 48 countries, which explored the broad theme of “teachers and school leaders as valued professionals”.

Locally, 2,046 lower secondary teachers and 169 principals completed the Teacher and Learning International Survey (TALIS) by the Organisation for Economic Cooperation and Development (OECD).

According to the second volume of the study, teachers in SA have comparatively lower levels of job satisfaction compared with the other OECD participating countries.

While 18% of SA teachers regretted becoming educators, the OECD average was 9%.

At least 33% of SA principals also expressed doubts over whether they chose the right profession, compared with the 20% average across the OECD countries.

The report, which is being released by the department of basic education on October 30, indicated that 30% of local teachers would like to leave teaching within the next five years. 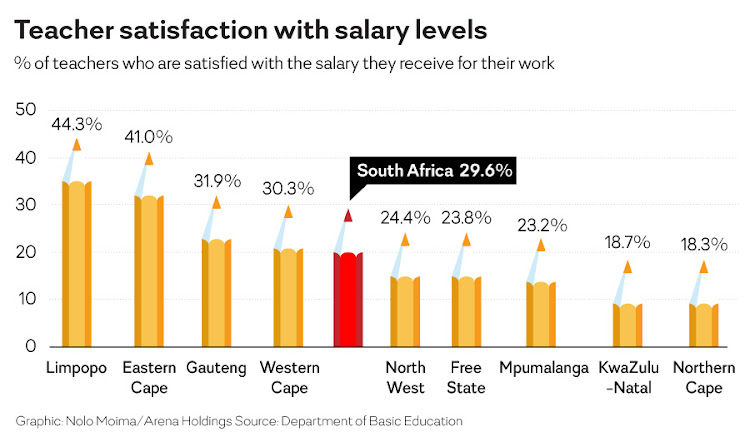 The number of teachers who are satisfied with their salaries.
Image: Nolo Moima

Interestingly, the study found that SA was one of the countries “with the highest share of teachers” who felt their profession was valued in society after 61% endorsed this view compared with the 26% average across the OECD countries.

“In Limpopo, more than 75% of participating teachers considered their profession valued by society and the community they serve,” the report stated.

More than 60% of teachers in the Northern Cape, Mpumalanga, the Eastern Cape and North West also considered their profession valued.

“In contrast, in Gauteng and the Western Cape, the value of the profession in society is lower for teachers.”

At least 87% of SA teachers reported having control over determining course content in their class compared with 84% on average across the OECD countries.

“In South Africa, teachers reporting higher levels of control over their class are more likely to report working in innovative school environments. Opportunities for teachers to have a voice in developing the school vision and goals are an integral component of teacher leadership.”

More than half of SA teachers believed they can influence education policy in contrast to 24% of the OECD participants.

The majority of teachers locally indicated they work in a collaborative school culture characterised by mutual support.

“South Africa is the only country that has a significantly higher proportion of principals who report that they took actions to support cooperation among teachers to develop new teaching practices.”

One in five teachers from the OECD countries reported experiencing high stress levels compared with one in four teachers from SA. 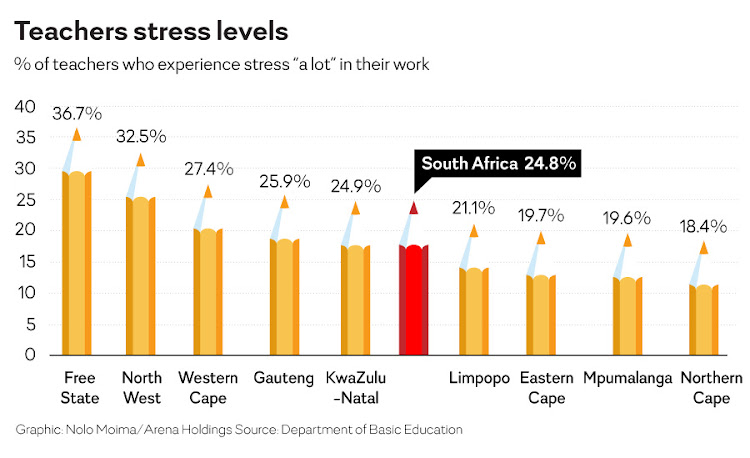 Teacher's stress levels in SA are the highest in the Free State.
Image: Nolo Moima

The most prevalent sources of stress teachers experience locally are being held responsible for pupils’ achievements, and having too many marking and administrative tasks.

“High stress and administrative overload may threaten the attractiveness of the teaching profession.”

In a message featured in the report, basic education minister Angie Motshekga said that as the only African participant in the study, “we have once again positioned our country as a learning system eager and willing to measure our capabilities among the best in the world”.

“We do so knowing that many of them have far more robust and advanced education settings but we are committed towards building an excellent education system that stands up to high international benchmarks and standards.”

“The study provides an opportunity for teachers and school leaders to provide input into educational policy analysis and development in key areas. Teachers are frontline actors in improving learning outcomes.”

Responding to the study’s findings, Basil Manuel, executive director of the National Professional Teachers’ Organisation of South Africa (Naptosa), said he was not sure that teachers experienced the feeling that the profession is becoming more respected in society. 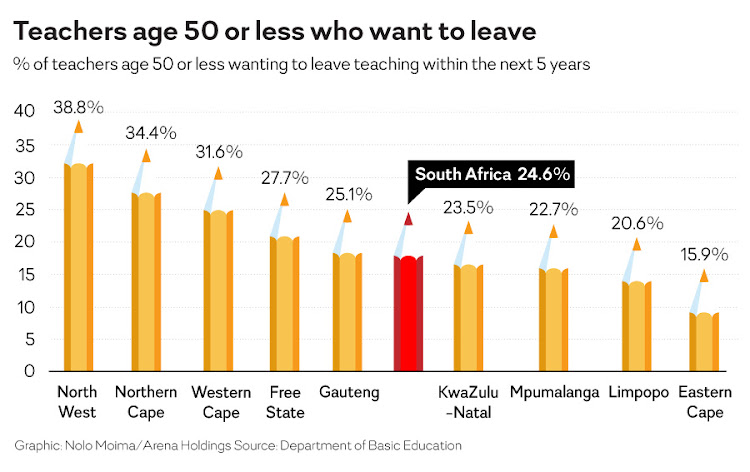 The number of SA teachers who want to leave their jobs.
Image: Nolo Moima

Commenting on those who regret becoming teachers, he said that the past few years had shown that “people have been hammering to get into the profession”.

“They may regret becoming teachers but that doesn’t mean they are going to be leaving.”

Manuel expressed scepticism over the finding that almost 80% of SA teachers and 90% of principals are satisfied with their job.

“It’s a funny statistic given that one in five teachers locally regret becoming teachers and 30% want to leave within the next five years. But I can tell you that many, many people are satisfied with their job.”

He said that while teachers may be unhappy with certain aspects of the job, “this doesn’t make them unhappy teachers”.

However, Manuel was not convinced that teachers enjoyed autonomy in teaching, saying there was “a very prescriptive syllabus and teaching guidelines”.

“Naptosa has been fighting for teachers to have the autonomy to assess their learners against what they teach but we constantly have these provincial tests that doesn’t speak to autonomy.”

Shut your mouth or you die! New Senekal twist sparks fears for witness