‘My parents didn’t want me to join, but they were struggling to ...

Some students have lost years of their lives since taking part in #FeesMustFall protests, but they’d do it again

Yonela Ngaleka, 22, suffered severe depression after she was arrested for her alleged involvement in torching a police vehicle and assaulting an officer during #FeesMustFall protests.

On October 25 2016, students protested around Braamfontein in Johannesburg. That evening, a police car was set alight.

Ngaleka, a BA General student at Wits University, was arrested in connection with the those protests, an event that has delayed her life and academic studies for years.

“I started getting involved around May 2016. My parents didn’t want me to join. They said for my safety and studies I shouldn’t. But I felt passionate, because my parents were already struggling with paying my fees.

“That day we were protesting around Noswall building outside Braam. We were blocking traffic with rocks and tree branches. About 6pm a police car was burnt and a police officer was attacked, and I was already home. I [live off-campus] and there’s no way I could have been at campus at that time.

“The following day we were sitting on campus and as I was about to leave, three police officers with backup came towards me and identified me, and took me to Hillbrow police station. No one told me anything for hours. I was with Khaya Cekeshe. I was denied the right to make a call. About 7pm I was informed I was under arrest for attacking a police officer. I was shocked and confused,” she said. 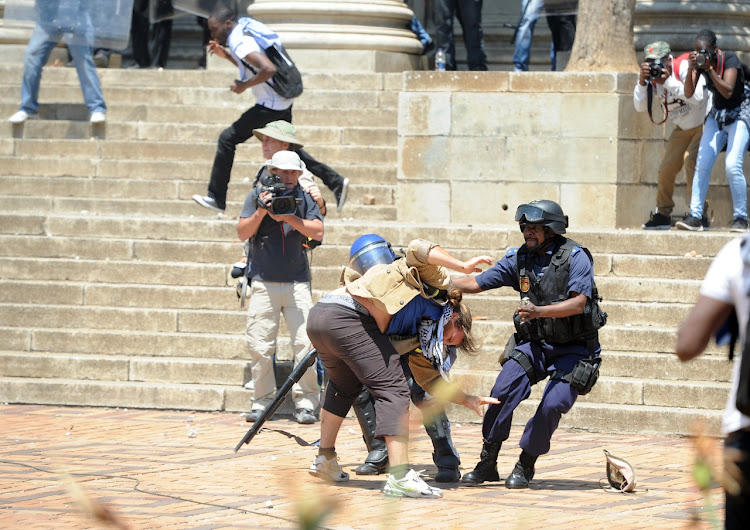 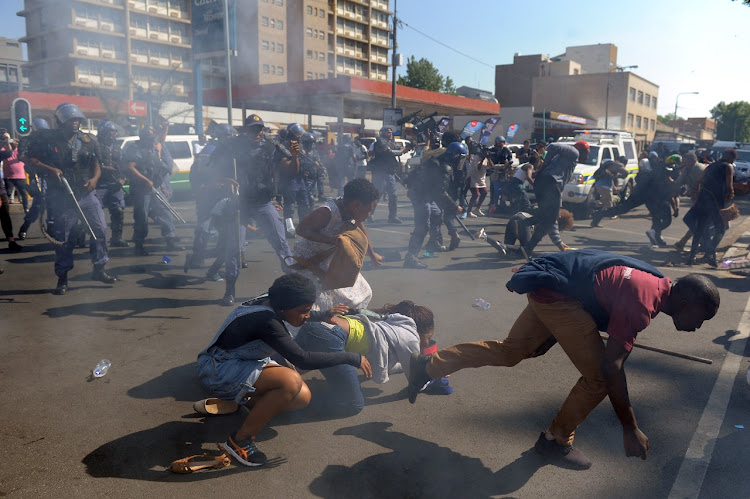 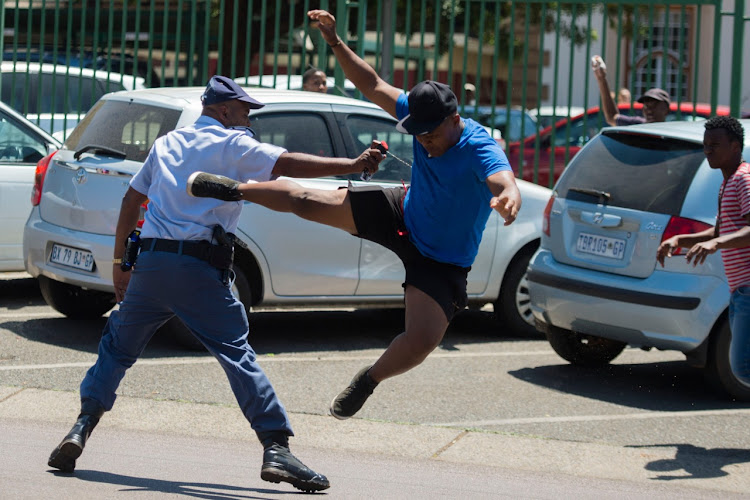 Ngaleka was in the holding cells for three days.

“I was detained at Sun City for a week. The case went on for three years. I was charged with arson, malicious damage to property, public violence and public disturbance. It almost turned into attempted murder because apparently there were firearms in the vehicles and if they exploded someone would have been killed,” she said.

This marked the beginning of her and her family’s misery. She was eventually released on bail, but being jailed left her severely traumatised, she said.

“At first, I blocked out the thought that I’m in jail, I couldn’t even look my parents in the eye when they came to visit because of how it would affect them. I had to pretend everything is fine. I would tell them it felt like being in a school camp, not too bad.

“But I was lying. That place is depressing, you feel caged, you can’t think or focus. I felt small. I despised this institution. I would sleep all day and couldn’t eat.

“I feel singled out. There was no support from the student movement. My family faced this alone,” she said.

I feel singled out. There was no support from the student movement. My family faced this alone.

“This put a strain on my family. It changed the family dynamics. My parents were constantly scared that I might lose the case and go back to jail. They were stricter with me. My siblings were also badly affected. In 2017 I couldn’t focus on my studies. My court appearances would clash with my classes. I remember in my final exams I turned away from the venue three times. I felt the need to go away. I wrote only one exam that year,” Ngaleka added.

Her depression, no money for fees, court dates clashing with classes and a ruptured appendix led to her forfeiting parts of 2017 and 2018. She only returned to campus in 2019 to finish her first-year modules.

Her public violence case continues, but the other charges were dropped.

“There’s a friend I came to school with. She’s doing her masters now and I’m still here. It’s stressful.

“I would protest again. This was a noble cause, even though it didn’t achieve all the things we intended. We had the potential to achieve our goals, but there are days where I feel it was in vain. The universities have not changed.

“I want to finish this undergrad and start with my LLB degree.

Psychologist Willem Slabbert said an experience in jail would cause severe trauma.

“Being in jail can be extremely damaging, especially for strong people who can internalise their trauma. The longer you suppress it, the worse it affects you. A prison is a scary place; one constantly worries about one’s safety and life. That kind of stress can result in your brain shutting down,” he said.

Often people were not fully aware that they were suffering from post-traumatic stress disorder (PTSD), he added.

“Some think they are fine; they stay with the problem without getting help and then are hit a depression. But before they do, they struggle to sleep, eat, focus and feel anxious. Then they experience anxiety attacks and a personality change or mood swings.

“Depending on how often they relive the trauma, they might lose their joy for life and self-confidence,” Slabbert said.

Being in jail can be extremely damaging, especially for strong people who can internalise their trauma.

Bonginkosi Khanyile, from the Durban University of Technology (DUT), was sentenced to three years’ house arrest last year. He was convicted in August 2018 on charges of public violence‚ failing to comply with police instructions and possession of a dangerous weapon for his involvement in the 2016 protests.

“If I knew I was going to be met by so much violence from the state, I would have done worse. We never knew we were up against a brutal state. I was traumatised for a mere slingshot.

“Violence was never part of our strategy ... if we had meant to be violent then universities and police stations would have been in ashes,” Khanyile said.

Asked whether he would protest again, he said he would.

“Our sufferings are for a good course. Even in the academic spaces, the question of decolonisation is in the table. It becomes the responsibility of those students in the system to consolidate the ground and push the movement further.

“It was not in vain, there are some successes that the movement achieved. We said we want an education that is not commodified, but accepts students on the basis of their academic ability. An education that reflects the aspirations of the people. It must speak directly to us,” he said.

He said the National Student Financial Aid Scheme’s (NSFAS) commitment to absorb and cover more students was a victory.

“Young people are graduating and accessing state funding better than five years ago. Even though that wasn’t our initial demand, it’s better than nothing,” he added.