The protest cost Minnie Ntuli her degree, but it opened doors she never imagined possible 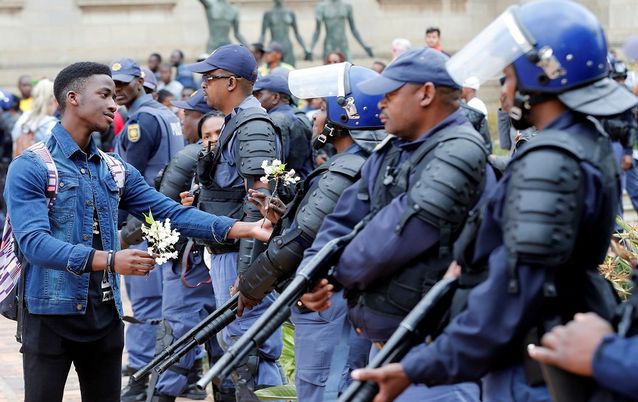 PEACE OFFERING A student offers a flower to a policewoman after #FeesMustFall clashes at Johannesburg's University of the Witwatersrand.
Image: Siphiwe Sibeko/Reuters

As a student activist at the height of the #FeesMustFall protests, Minnie Ntuli, 26, got into a heated on-air debate with an East Coast Radio presenter who accused students of burning buildings and being vandals.

Five years later, Ntuli is working at the station as a presenter.

“East Coast Radio called me during Fees Must Fall and the presenter said UKZN (University of KwaZulu-Natal) students were nonsensical for burning buildings. We had this fight on radio, only to find I’d end up working there,” she said.

Ntuli, who was doing a bachelor of arts degree, was thrown into a pit of fire when she was elected student services officer for the university’s 2015/2016 Student Representative Council (SRC).

“The battle of fees was bigger than everybody. The position I got dealt directly with students, so my job was Fees Must Fall. My job was everything pertaining to students and so I could not ignore their issues when I was one of the people who were affected, “she said.

#FeesMustFall cost me my freedom and my passion. #FeesMustFall brought depression and anxiety to my life, but I knew my purpose at that time was to serve, to be brave.

In the aftermath of a violent confrontation between students and university security, where rubber bullets and teargas were fired at students, Ntuli and other student leaders found themselves hunted. Then they faced legal action.

But the movement also gave Ntuli time to follow her passion for music and entertainment.

In 2017, she made the top 16 in reality singing competition Idols and has gone on to feature in cooking show My Kitchen Rules, as well as release music.

“After #FeesMustFall I was brave enough to say, OK, I am leaving this institution, thank you very much, I have done my part and I need to follow my passion.”

It cost me a certain level of peace. Even now I can’t use my full name to contribute to this article because they might be after me. There is that level of always having to look over your shoulder.

Ntuli said one of the biggest regrets  of the first wave of protests was that people were still paying the price for it.

“It’s so unfortunate that there are some who are still in court today. There are still some #FeesMustFall prisoners today who are no longer supported, not just by students, but by the institution, and are going to court alone.

“It’s rather unfair. We needed heroes who were willing to be brave and lead the march, and now they have been left alone to attend court cases,” she said.

One of those was Rhodes graduate Thandeka Mseleku*, 24, who was arrested for her participation in 2016.

“The day I got arrested was the most hectic day. They had brought in every single police van and tank onto the campus. There was basically a campus lockdown and they were looking for people who were part of the protest.”

Mseleku and the six people she was arrested with spent two days in a cell in Makhanda. Though the matter was struck off the court roll, she said until 2019 they were harassed by police.

“It cost me a certain level of peace. Even now I can’t use my full name to contribute to this article because they might be after me. There is that level of always having to look over your shoulder.”

Ntuli and Mseleku said post-#FeesMustFall they gained a larger sense of community.

“I learnt a lot. I learnt the art of negotiating. I made a lot of friends who are now my sisters and brothers, because when you share pain with someone ... you bond,” said Ntuli.

“I gained a community of people who are like-minded and passionate, and care about people. People went out of their way to make sure we had blankets and food while we were arrested. I have gained a sense of community with people who were part of #FeesMustFall, even outside Rhodes,” said Mseleku.