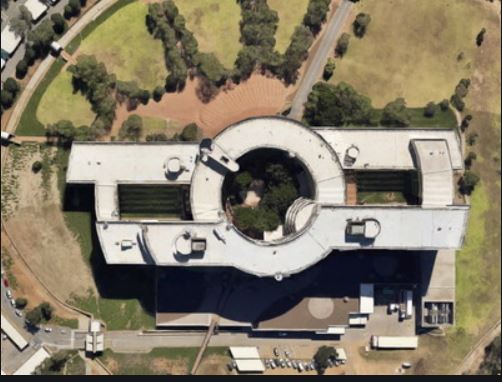 Off guard An armed robber managed to slip past numerous security checks to get into the Armscor compound, which houses the defence ministry and SANDF and defence department headquarters.
Image: defenceweb.co.za

An armed robber, disguised as a cleaner, breached the defence ministry and defence force headquarters compound in Pretoria and robbed a bank before escaping undetected.

The robbery, which is being investigated by the police and Military Intelligence officers, occurred on Wednesday at the Armscor compound.

Sources say the robber, who did not injure anyone, spent almost 30 minutes inside the compound.

The facility houses the defence ministry, and is the headquarters of the SA National Defence Force and the department of defence.

The breach comes just 10 months after the theft of 19 semi-automatic R4 rifles from the army Engineering Formation armoury at the Lyttelton Tek Base in Centurion, Pretoria, on Christmas Eve in 2019.

Twelve soldiers were arrested for the robbery, and the police recovered the weapons.

Sunday Times Daily has learnt that in the latest robbery the intruder, who held up staff at an Absa bank branch situated within the Armscor facility, disguised himself as a cleaner.

The compound has a number of layers of security, including armed guards, boomed gates, CCTV cameras, X-ray machines and body scanners.

To gain access to the bank, say sources, one has to pass through two different security checkpoints, one of which is equipped with X-ray machines.

How does someone with a 9mm pistol manage to get through so many security layers? The country’s entire defence command structure is based here.

A source with knowledge of the breach said: “Photographic identification needs to be provided, with different registries and logbooks having to be signed, not only by people when they enter the compound but also when they leave.

“This is crazy. How does someone with a 9mm pistol manage to get through so many security layers. The country’s entire defence command structure is based here.”

The robbery pointed to a number of security system failures, the source said.

“Sure there is a tight inner security cordon, which separates and protects the defence HQ and Armscor HQ personnel, but can you imagine what would have happened if senior officials had been caught up in this? The defence ministry is also housed here.

“Even more embarrassing is that the person escaped undetected. It just beggars belief.”

Sunday Times Daily has been informed that a security contract with Bidvest ended on Wednesday, September 30, with the new security company, Tyeks, appointed on October 1.

The source doubted the breach had anything to do with the changing of security companies: “Plainly this is a breakdown in security systems. The robber would definitely have done his homework to pull this off. It would have taken considerable planning and knowledge.”

Armscor spokesperson, advocate Ndodomzi Mvambo, confirmed the robbery and said it occurred when the suspect pretended to be a cleaner from Bidvest, “which is contracted to do disinfections at Absa branches”.

He said preliminary information indicated that only one man had been involved in the robbery.

The organisation has since increased the number of security personnel on-site.

Confirming the appointment of Tyeks, Mvambo said there were various security measures in place at Armscor.

“The organisation has since increased the number of security personnel on-site.”

Mvambo said no one was injured in the robbery.

He said defence intelligence officers, along with the police, Absa security officials and Armscor security were investigating the robbery.

Defence analyst Helmoed Heitman said the breach was highly embarrassing, “although it is not as severe as the weapons theft in December”.

He said the bank was situated outside of the security cordon for the defence and Armscor headquarters.

“This breach is serious enough, but if the suspect had breached that security cordon then this would be a lot more worrying.”

Heitman – who confirmed that to enter the compound one needed to produce photographic identification and sign registers – said it was clear from this incident that the compound's security needed to be beefed up.

She said the robber entered the bank on the pretext of coming from a cleaning company to render a service.

“The suspect allegedly held bank staff at gunpoint before making off with an undisclosed amount of cash and security camera hardware.”

No arrests had been made.