Gobsmacked: whale and calf give curious diver the sight of a ...

Gobsmacked: whale and calf give curious diver the sight of a lifetime 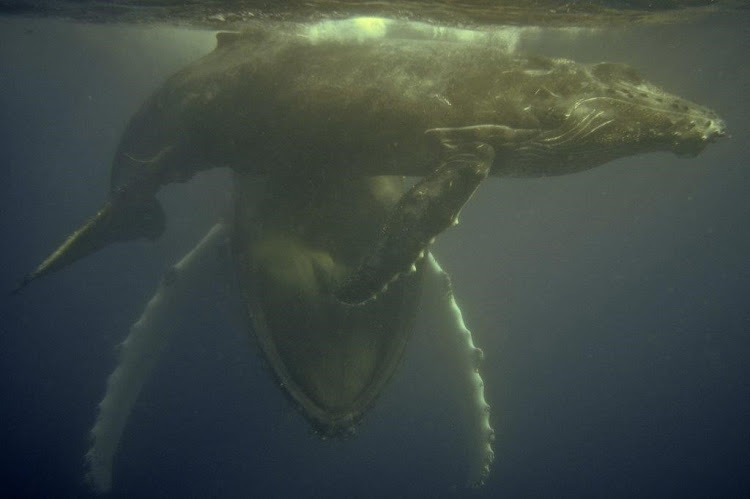 Somebody's watching, mom The humpback whale with her calf in her mouth.
Image: Supplied

KwaZulu-Natal South Coast diver John Miller was about to pack up after an underwater marine adventure when he spotted a humpback whale and decided to go back in for a closer look.

He was rewarded with the sight of a lifetime at Aliwal Shoal, near Scottsburgh.

Miller, who runs a diving company, spotted the humpback “logging” with her young.  This is when a whale at rest on the surface of the water resembles a log, with the dorsal fin or parts of the back exposed.

“When I got close I saw the calf on the surface but couldn’t see the mom, and I was wondering what was under the baby because that all looked very strange. Then I realised the mother had her mouth open and was cladding the baby on the top of its mouth,” Miller told Sunday Times Daily.

Miller said he had never seen anything like this in his 30 years diving.

“It’s a great feeling, obviously, for science, and for humans to see something like that is incredible. It gave me goosebumps, it was something that wasn’t documented in the world. It’s also really cool for science and nature and people studying animals. We have since seen instances where dolphins carry their dead babies in their mouths,” he said.

Whales have limited use of their limbs, so using the mouth may be a natural way to compensate.

After spotting Miller – the encounter lasted seconds – the mother and calf swam away, thereby confirming the calf was alive.

Dr Stephanie Plön, of the Bayworld Centre for Research and Education in Port Elizabeth, says the bond between a whale and her calf is often physical, which was exemplified by and this sighting.

“What we do know is that, during the initial development phase of the calf, there is little, if any, vocal communication. What we do see is that there is physical bonding – like cuddling – so it’s possible this was a physical display of the bond. It also needs to be recognised that whales have limited use of their limbs, so using the mouth may be a natural way to compensate,” said Plön.

Resting whales typically lie horizontally at 4.5m-6m deep, with the calf positioned directly below the mother’s chin or tucked under a flipper.

For Miller, the unique sighting, and the pictures he captured, will make for great party stories for years to come.

Aliwal Shoal, which is just 5km off the Umkomaas River, is one of two marine protected areas on the South Coast, alongside Protea Banks, which is 8km off Shelly Beach.

Both are world-revered dive sites which have prompted several international documentaries and attract crowds of global tourists.

Alongside migrating humpback whales, Aliwal Shoal and Protea Banks are home to a variety of incredible marine life, including big-game fish and numerous shark species.

Rain gets another brolly good scolding for exaggerating its torrents