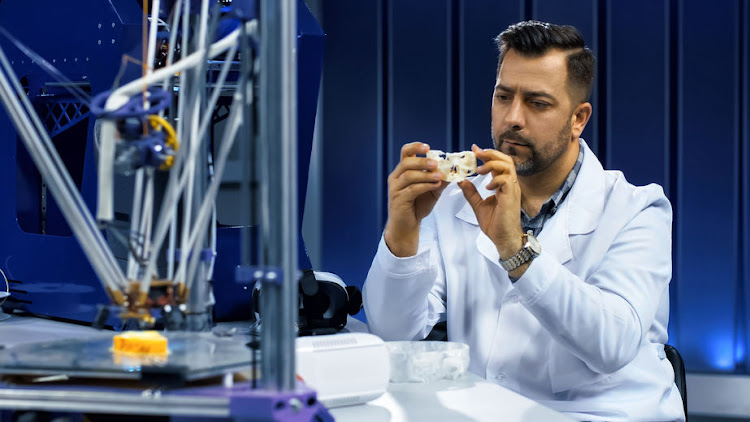 Cutting edge Stellenbosch University and Tygerberg Hospital are involved in a 3D-printing project that could make ventilators and respirators for the fight against Covid-19.
Image: 123RF/Evgeniy Shkolenko

The Covid-19 storm may be dying down little by little, but efforts to conquer the pandemic haven’t abated.

Stellenbosch University and one of SA’s tertiary hospitals, Tygerberg, are at the forefront of piloting versatile and inexpensive equipment to fight off the respiratory illness.

This is thanks to an international initiative, Give a Breath Challenge, which sought ways to use 3D manufacturing for non-invasive ventilators, oxygen concentrator devices and respirator masks.

The challenge is the brainchild of insurer Munich Re and German research organisation the Fraunhofer Society, which aimed to draw on global expertise to alleviate the impact of Covid-19 in severely affected parts of the world.

Stellenbosch University spokesperson Martin Viljoen said the piloting of blueprints for 3D-printed ventilators and masks was expected to begin soon.

Depending on the trial outcomes, the devices that emerge might also be submitted for registration with the SA Health Products Regulatory Authority (SAHPRA), said Viljoen.

The university was “honoured” to be selected as a partner in piloting the manufacture of devices designed in different parts of the world.

“We welcome the opportunity to contribute to initiatives that will unlock access to care for patients across the African continent,” said Viljoen.

Technical and medical experts would evaluate the prototypes in simulations.

“Since the prototypes are not yet certified for clinical use, these trials will be conducted without the involvement of patients,” said Viljoen. “A process to apply for SAHPRA approval may follow later, depending on the trial outcomes.”

In March, Munich Re launched the Give a Breath Challenge to allow the immediate and decentralised production of emergency ventilation equipment.

About €1m (R19.6m) was invested in the initiative, in which the number of designers was trimmed from about 150 teams to a shortlist of seven, then a winner.

Viljoen said the manufacturing pilot project would be coordinated by the Fraunhofer Innovation Platform at Stellenbosch, and “it is hoped that trials could start in October”.

Stellenbosch University and Tygerberg Hospital are among several partners across the world working on 3D-manufacturing the devices, which are intended to be open-source.

The digital teaching handbook for the operation and maintenance of the equipment will also be globally accessible through an app. This approach will enable severely affected regions to receive support more quickly and independently of international supply chains.

“The ventilator masks have been specifically designed for 3D printing, and a small series is to be printed in SA. Following the usability tests and depending on their outcome, the winning teams will decide on whether and how to take their devices further to market, which would also include relevant SAHPRA and international approval processes,” said Viljoen.

Women locked down by two deadly pandemics, with ...

Even at its worst, Covid in kids is unlikely to ...

For the love of fraud: now US is also to indict ‘conman’ pastor Jali