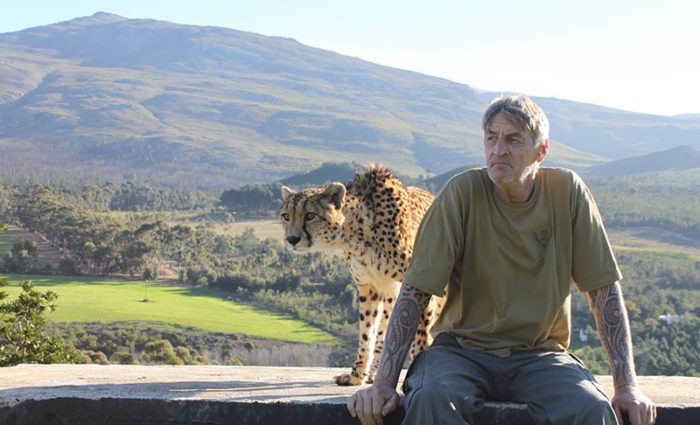 In the spotlight Luke Cornell and one of the cheetah actors on the farm.
Image: Supplied

Animal actors from a farm near Cape Town will be able to keep working during the Covid-19 lockdown thanks to a radical live-streaming experiment by two SA film production companies.

The animals, which live on a 140ha farm called Cornellskop near Cape Town, featured in a six-hour production that was streamed to 50 locations around the world, including London, South Korea, Canada and Japan.

“In those six hours of streaming we did not drop a single frame,” said Duncan Robson, creative director at The Network Productions, the production house that set up the shoot.

The point of the experiment was to send the message that SA’s film industry, and Cornellskop particularly, was open for business after the bruising lockdown.

Cornellskop had been hit hard as film shoots dried up overnight. About 90% of the production work is for international shoots.

“We were very busy before lockdown,” said owner and animal handler Luke Cornell. “It was prime season.”

The two-month lockdown also brought a stop to visiting tour groups which helped pay the R220,000 monthly bill to keep the farm running, he said.

The farm also relied heavily for income on daily tours and an outreach programme which included such activities as letting  the cheetahs show off their speed to visiting school kids. 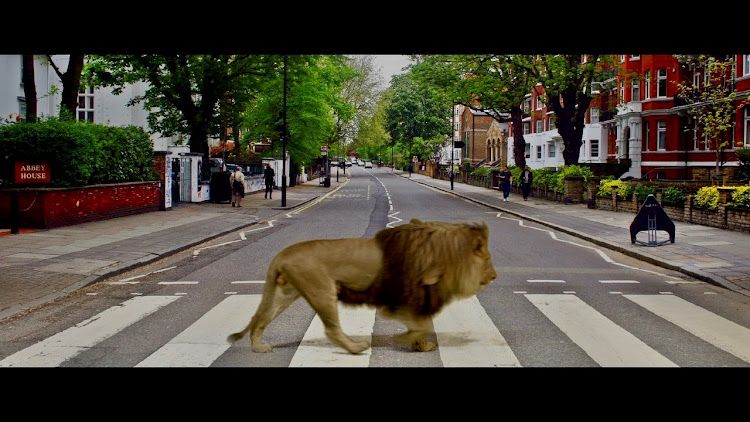 BIGGER THAN THE BEATLES Mojo the lion crosses Abbey Road during the live-streaming broadcast. Mojo was working in the studio in SA when this was filmed.
Image: Image courtesy of The Network Productions

Cornell has been handling animal actors for 32 years, the last 15 on the farm 90km from Cape Town.

The actors on call range from big cats to birds to reptiles.

The actors work on shoots for film, TV and advertising, alongside Hollywood heavyweights such as Angelina Jolie and Nicholas Cage, for movies ranging from Lord of War to Racing Stripes and Blood Diamond.

The zebras, which Cornell says are the tamest herd in the world, have worked in studios. Columbia, the lead zebra, has even been to Cape Town International Airport for a shoot.

The farm’s ostriches were the stars in a Samsung ad that took gold at Cannes in 2017.

In response to any criticism from animal welfare organisations, Cornell said he welcomes anyone to visit.

“Come here and see the animals first hand and see if they’re unhappy. Until you have walked here and seen the animals, don’t bother making any criticisms.

“I don’t keep any animal that I can’t give any environmental stimulus to, that I can’t take out to exercise.”

That means no exotic animals such as tigers or activities such as petting lion cubs. There are also regular check-ups by vets and inspections from CapeNature.

There is also an animal welfare officer on set during every shoot.

Almost all the animals on the farm are rescues, said Cornell.

“The lion cubs were rescued from a bone-trade farmer. Without being rescued they would be dead.”

The live-stream shoot proved that remote shooting at Cornellskop was viable with the animals in studio and also on locations around the farm.

“It’s a slow burn. I can’t say it’s been a flood but we are now getting calls from Japan and across Asia.”

The process would also benefit filmmakers by generating trust in the artisanal filmmaking, he said.

While global lockdowns have spurred adoption of new technology, processes such as computer-generated imaging did not pose much of a threat to places like Cornellskop, said Cornell.

I’ve been in post-production since 1985 and I’ve never seen a CGI lion that convinced me it was a lion.

Robson said CGI (computer-generated imagery) was only a threat because of a lack of familiarity with what real animals looked like.

“I’ve been in post-production since 1985 and I’ve never seen a CGI lion that convinced me it was a lion,” he said.

With the high cost of CGI production it was usually cheaper to send a crew to SA to film the real thing, he said.

“Some shitty actors get a lot more than that,” said Cornell.

Meanwhile, a number of local producers have contributed to a Back-A-Buddy campaign to help tide Cornell over while the production drought continues.

“The industry has been amazing,” he said.

Tipping the scales: what it takes to babysit the ...