Will state matrics’ varsity dreams be dashed by late issuing of ...

The IEB has swatted away the unease, saying varsities only make allocations once all results are in. Is this true? 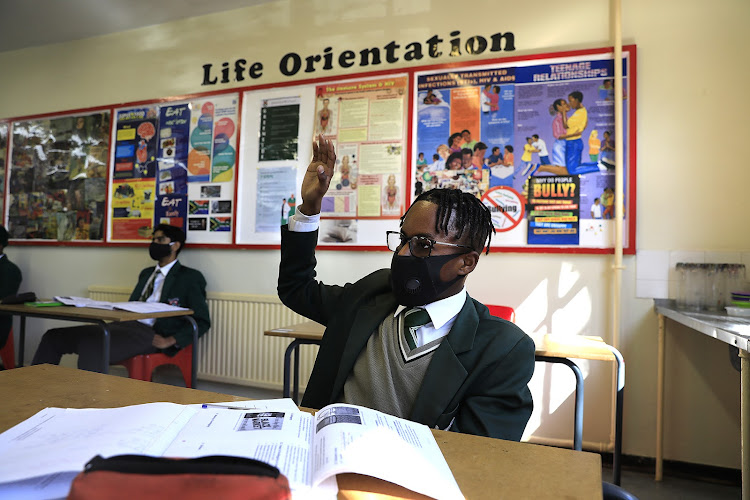 cause for concern Pupils at Greenside High School, a public high school in Johannesburg. Matric exams have been delayed because of the Covid-19 pandemic.
Image: Alon Skuy

Private school pupils stand a better chance of being accepted at university next year because their matric results will be released earlier than those of public schools.

This perception by some members of the public came up for discussion during a meeting on Monday between the department of basic education (DBE) and Universities South Africa (USAF), a body representing the country’s 26 state universities.

The discussions followed a workshop by the department on Saturday, where the implications of the revised matric timetable for public school pupils were discussed.

The combined June and November exams to be written by an estimated 1.1 million candidates will take place from November 5 to December 15.

They was originally scheduled to start on October 26, but were postponed because of disruptions caused to the school calendar by Covid-19.

However, the matric exams for the majority of private school candidates, administered by the Independent Examinations Board (IEB), will start in the last week of October and finish at the end of November. Some private candidates write matric exams that are administered by the South African Comprehensive Assessment Institute (SACAI) and will also start earlier than public schools.

Pupils at public schools will only receive their results on February 23 next year.

Universities will have to manage their admission process in such a manner that there is no disadvantage to public school pupils.

The implications of the revised matric timetable, which was mentioned during a presentation by the department’s deputy director-general for curriculum policy, support and monitoring, Mamiki Maboya, on Saturday included the following:

USAf’s CEO, Prof Ahmed Bawa, said they advised the department to meet the IEB to see if there was a possibility of postponing the announcement of the IEB results.

“Now that we are aware of the early release of the results, we should be careful as institutions not to disadvantage the pupils who are writing the NSC exams [when it comes to placement].”

Bawa said the department indicated it would meet the other assessment bodies responsible for administering matric exams to private candidates.

But Anne Oberholzer, CEO of the IEB, denied applications to universities for first-year placement from private school candidates would receive preferential treatment because the institutions would be given the results earlier.

“We can only release our results when Umalusi has its approvals meeting. My understanding is that they approve the release of the results of all exam boards at the same time.”

We can only release our results when Umalusi has its approvals meeting. My understanding is that they approve the release of the results of all exam boards at the same time.

According to the workshop, Umalusi’s approvals meeting for the DBE results was scheduled for February 16 and the release of the results to USAF on February 20.

Said Oberholzer: “There’s no gain if the results are released earlier or later. It’s a myth, because only once the results are confirmed will the university do its allocation.

“If you had five As at the end of grade 11 and were provisionally accepted [to a university], and you get five As after writing the matric exams, your place will be confirmed.”

Mandla Mthembu, chair of the National Alliance of Independent Schools Associations, said there was a perception, “which is based on some degree of truth”, that the IEB exams were “more rigorous in its interrogation of content” compared with the department’s exams.

“The IEB results have, over the years, attracted attention because of the number of bachelor’s passes that are produced.”

He said there was “a tacit, unwritten bias” by some universities to look at IEB candidates first.

“The IEB is looked at differently when it comes to the matric results.”

The IEB is looked at differently when it comes to the matric results.

Umalusi spokesperson Lucky Ditaunyane said if independent assessment bodies complied with all the quality assurance requirements, their results could be approved and released earlier than those of public assessment bodies.

“Umalusi holds the view that all relevant stakeholders in basic and higher education are fully aware of the pressures brought to bear on the 2020 cohort of learners by Covid-19.”

He said decisions made by universities on student admissions “fall outside the legislative remit of Umalusi’s mandate”.

Ditaunyane said Umalusi was still consulting with assessment bodies, including the IEB and DBE, on the date for the approval of the matric results.

The department of basic education did not respond to queries.

Teaching granny sticks it to Covid-19 to fire up ...

Test of patience: teachers twiddle thumbs as they ...

Why are millions of SA pupils still starving? ...

The real pandemic: booze debate back on after drunk driver kills 3 cops