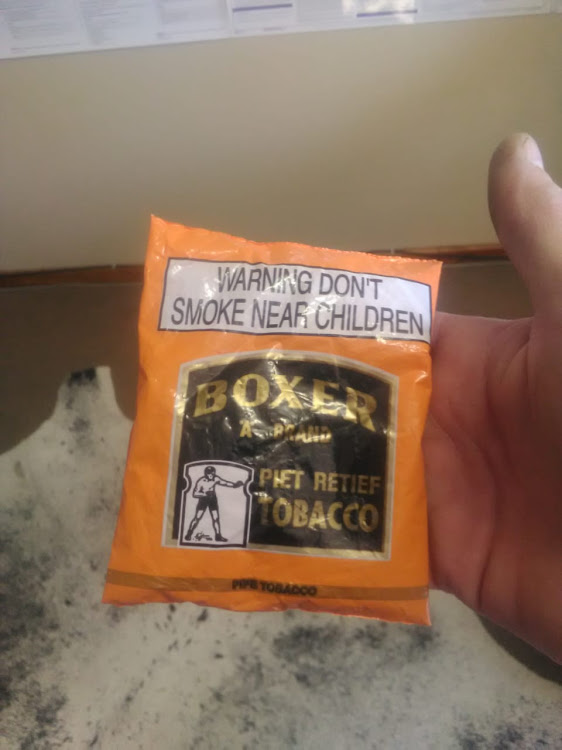 Chew on that! Dental technician Andries Hennop holds a bag of pipe tobacco he says he bought before lockdown. He has been acquitted after being caught with two cigarette cartons in his car during lockdown.
Image: Supplied

A 42-year-old Krugersdorp man who spent hours behind bars after being arrested for possession of sealed cigarettes during lockdown has been acquitted in a test case brought by AfriForum.

Andries Hennop was cleared on Friday after his arrest on May 22. He was stopped at a roadblock in Roodepoort, west of Johannesburg, where traffic officers found two cartons of cigarettes in his possession.

“Police officers who arrested me said I was being arrested because the cigarettes had been closed and this was not allowed,” he said.

The dental technician had maintained his innocence since his arrest, as he argued the cigarettes had been bought before the ban.

He described his three-month court battle as a victory and “an affirmation of the wrongful arrest”.

“It’s just an affirmation of what I’ve always known – that my arrest was unlawful ... I am glad it’s all over now.”

He recalled how his arrest and subsequent court appearances affected his business and family.

“It was bad. My wife had to run around to try find bail money, my kids didn’t take it well as they are very sensitive and we’ve always had an open-book policy ... you can imagine with the business as well, it was lockdown, things were not going well already and something like this came through as well,” he said.

AfriForum would now assist Hennop and another man, who was wrongfully arrested on ivory-related charges after the officers found a pair of old kudu horns in his boot, to sue officials.

“I think that even though I’ve always said the police officers do good work, they have to know the law. It does not help to have someone in uniform, wearing a badge and not knowing what the laws are. At the end of the day that’s the one thing I hope comes out of this. At least there will be one or two officers who know better about the law before they act on anything.”

Marnus Kamfer, AfriForum’s legal and risk manager, described Hennop’s acquittal as a victory for the country.

“This is a major victory for the citizens of SA over the unfair behaviour of members of the law enforcement authorities, who hide behind alleged violations of the lockdown regulations,” said Kamfer.

He confirmed that AfriForum would now assist Hennop and another man, who was wrongfully arrested on ivory-related charges after the officers found a pair of old kudu horns in the boot of his car, to sue officials.

“AfriForum will now help the men in laying civil claims against the authorities, and more specifically against the respective members who made themselves guilty of these power abuses.

“The SAPS warned its members during the lockdown to use great care when they execute arrests during the lockdown. Members were also warned that they would be held personally responsible for any costs that the SAPS will have to incur as a result of claims that are instituted successfully against the SAPS by aggrieved citizens. We would like to see that the respective members pay the price, instead of the taxpayer having the worst of it because of members’ unlawful behaviour.”

The National Prosecuting Authority had not commented by the time of publication.

In May, at the height of lockdown, law experts warned that many, if not most, apparently trivial charges emanating from lockdown arrests would not stick in court.

They warn that the police must prepare for a spike in civil claims for damages for unlawful arrests, which already cost the service billions of rand every year. (In 2014/15 it had pending claims amounting to R26bn, and in 2018/19 in the Eastern Cape alone it paid out more than R45m).

Adv Paul Jorgensen said the conduct of police at roadblocks was “a complete infringement of constitutional rights”.

Jorgensen said searches of vehicles would also be deemed unlawful unless the motorist gave consent, and for a charge to stick the police would have to explain why they had “reasonable suspicion” that an offence was being committed.

“People believe they are governed by the [lockdown] regulations. But the constitution and the applicable laws still apply,” he said.

“Paying admission-of-guilt fines is paying away all your constitutional rights. I understand that people just want to get it over and done with quickly, but it is not like paying, for example, a parking ticket. If they take your fingerprints you will get a criminal record.

“I believe hundreds of civil claims are in the offing and in many cases prosecutors will decline to prosecute when people start appearing in courts.”

A senior magistrate, who cannot be named, agreed.

He said the Constitutional Court had spelt out how discretion should be exercised before arrests were made and that “a prudent policeman should always explore less invasive means”.

‘You do not want your visit to your grandparents ...

There’s nothing cagey about Kajee: he ‘buys ...

Lockdown be damned! If you’re in rehab, you can ...

An economy for a rainy day: Cyril looks beyond the pandemic