In an unprecedented letter he pours his heart out, and lays down the law for those accused of graft 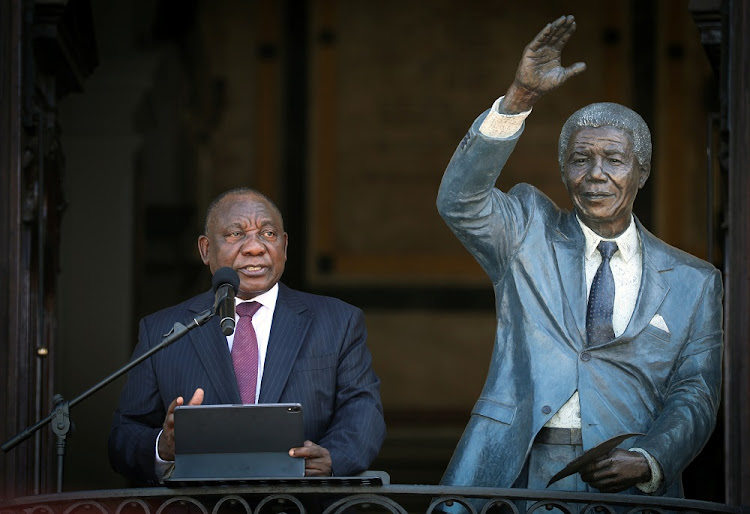 Guiding hand President Cyril Ramaphosa has written to the ANC about a culture of corruption.
Image: Reuters/Sumaya Hisham

“Today, the ANC and its leaders stand accused of corruption. The ANC may not stand alone in the dock, but it does stand as Accused No 1.”

This is according to President Cyril Ramaphosa in a hard-hitting seven-page letter addressed to ANC members on Sunday.

The letter comes as reports on the looting of millions of rand meant to mitigate the affect of Covid-19 are published daily.

“This is the stark reality that we must now confront,” said Ramaphosa.

He called on ANC members to make this the turning point in the fight against corruption, saying the movement and the country are facing one of the greatest challenges since the advent of democracy.

Ramaphosa reflected and acknowledged the growing anger of ordinary South Africans over the corruption allegations, saying the anger was justified.

“I am sure that you are aware that across the nation there is a sense of anger and disillusionment at reports of corruption in our response to the coronavirus pandemic. This anger is understandable and justified,” he said.

“In recent weeks, we have heard stories of tenders for personal protective equipment that have been given to individuals associated with ANC leaders and of public servants flouting the law in issuing tenders.

“What has caused the greatest outrage is that there are private-sector companies and individuals, including civil servants, who have exploited a grave medical, social and economic crisis to wrongfully enrich themselves,” he said.

We have to be sensitive to the concerns that are being raised by our people about our role as a movement in corrupt activities.

This, Ramaphosa wrote, is an unforgivable betrayal for the millions of South Africans who are being negatively affected by Covid-19, experiencing hunger daily, hopelessness and joblessness.

He said that while the current allegations about corruption in the fight against the coronavirus pandemic had brought this issue sharply to the fore, the reality was that corruption in SA had far deeper roots.

ANC members must acknowledge that their party has been and remains deeply implicated in SA’s corruption problem, said Ramaphosa. “We have to be sensitive to the concerns that are being raised by our people about our role as a movement in corrupt activities,” he said.

He said the ANC had been in government on national, provincial and municipal level for more than 26 years. This meant that leadership positions in the party had been seen by some as the most direct route to, in the first instance, employment and, in the second instance, influence in the award of tenders and the distribution of other government resources.

The people saw how organisational principles and processes were corrupted for personal gain, he said.

“They see how this deviant behaviour goes unchecked and allows unscrupulous and sometimes criminal elements to flourish.

“We cannot then blame the people if they stay away from our branches, programmes and initiatives. Our lack of discipline and failure to deal with the issues in our movement have eroded our organisational ethos and standing,” he said.

Over the years, corruption in the state, in society and in the ANC had taken several forms, with perhaps the best-known being the awarding of tenders and other contracts to certain companies based on conflictual relations such as friendships or family connections.

“For these people, success depends on who you know in the public service. Sometimes those awarding the tenders receive kickbacks from the successful companies,” he said.

Then there were “jobs for pals”, where politicians and officials disregarded hiring procedures to employ family members, friends or associates.

Pulling no punches, Ramaphosa said: “Not only is this grossly unfair to other prospective candidates, but it often means that the people employed are simply not up to the task. Public services are not rendered, public institutions are poorly managed and public funds go to waste.

“As we have seen during the Covid-19 response, there are local ANC leaders who have used food parcels meant for the poor to buy political favours from those people in the branch or broader community who they rely on for their positions. These practices quite literally take food out of the mouths of the poor.”

Ramaphosa said that on a hugely different scale, but with the same effect, was the capture of state institutions by public interests facilitated by politicians and officials at the highest level.

This “state capture” was being laid bare through evidence being heard by the Zondo commission of inquiry.

“It reveals a disturbing level of grand corruption, where individuals were placed in various institutions to manipulate procurement and other processes to siphon off massive amounts of funds for a network of politicians, public servants and business people.

“The effect has been devastating. Billions of rand that should have gone to improved public transport, to better infrastructure for the poor, to reliable and affordable electricity, to emerging black farmers and to the broader development of our country, have been stolen to line the pockets of a criminal few,” he said.

The Zondo commission reveals a disturbing level of grand corruption.

“Not only has money been stolen, but many of these institutions have been left deeply dysfunctional and some virtually destroyed. It has caused huge damage to the economy and to the capacity of the state.

“We must have the political courage and the honesty to acknowledge that ANC leaders, public representatives and members have on numerous occasions been implicated in such forms of corruption,” said the president.

Ramaphosa said he was not suggesting that corruption was only a problem of the ANC or that it was widespread among its membership or leadership, but that as a movement it had so far been unable to turn its organisational positions into actions that would end corruption once and for all.

“As a result, we have allowed corruption to continue and, at times, to flourish within our ranks.”

Ramaphosa called on those ANC members charged with criminal conduct for corruption and who occupied positions of responsibility within the government and in the party to insulate the organisation by stepping aside while their cases were being heard.

He proposed that every cadre accused of, or reported to be involved in, corrupt practices should account to the party’s integrity commission immediately or face disciplinary processes.

He also suggested that:

• People who fail to give an acceptable explanation or to voluntarily step down while they face disciplinary, investigative or prosecutorial procedures should be summarily suspended;

• The ANC should publicly disassociate itself from anyone, whether business donor, supporter or member, accused of corruption or reported to be involved in corruption;

• ANC leaders should be required to make regular declarations of financial interests;

• Lifestyle audits of all ANC leaders and public representatives be conducted; and

• A clear policy be developed on ANC leaders and their family members doing business with the state.

“We must acknowledge that once one accepts a leadership position, a higher standard of behaviour applies.”

Ramaphosa also called for the strengthening of the integrity commission, saying it should be given clear administrative and legal support, and for lifestyle audits of senior public servants and leaders of public entities.

Nothing Tops this: MP ‘shops for booze during ...

Zondo commission has cost us R700m and counting

ConCourt got too big for its boots on Electoral ...

At the risk of jumping the gun, could we be going ...

Show us the money: SA wants bold action from ...