Sheep lobbyists are pulling the wool over people’s eyes, say ... 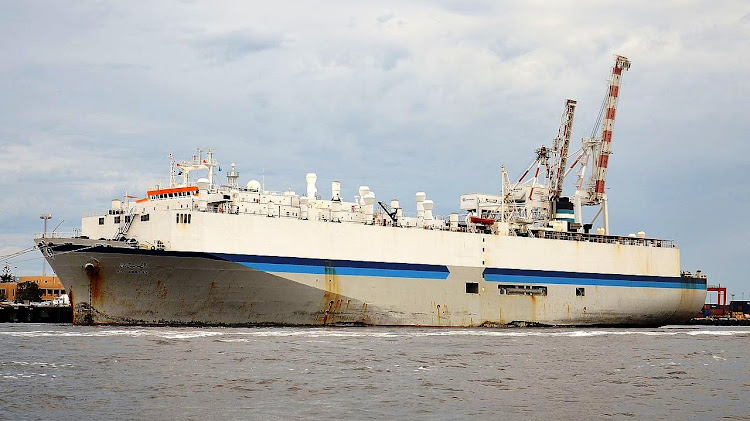 IN THE DOCK The Al Messilah livestock carrier, seen in Fremantle, Australia, on a previous voyage, is a 40-year-old converted container ship.
Image: Wikimedia Commons

Tens of thousands of sheep remain stuck on an Eastern Cape feedlot while a court decides whether they can be loaded on a ship and sent to the Middle East.

The 56,000 sheep have been at the lot for more than two months while the National Council of SPCAs  (NSPCA) and Kuwaiti shipping company Al Mawashi lock horns in the Makhanda (Grahamstown) high court over the trade.

The animal welfare group launched its two-part application on the grounds of suffering and cruelty.

The high court issued an interim interdict to temporarily ban livestock exports by sea from SA until mid-July.

We want to stop live animals from leaving SA by sea for slaughter.

The interim interdict was subsequently extended to allow the NSPCA to present its case in court on August 6 when the matter was again postponed.

Gerrans said problems aboard livestock carriers included ships having too few crew to tend the animals, overcrowded conditions with animals standing in their own waste and poor ventilation causing heat stress among the livestock, especially sheep.

“The primary problem on the voyage, for sheep in particular, is heat stress,” he said.

“Live exports are legal in SA and in many other developed countries. It is done in a humane way,” he said.

“It must be noted that animal welfare groups are over-stating the sheep numbers to be exported to give an impression of overcrowding on vessels.”

Ally said SA authorities, the Red Meat Industry Forum (RMIF) and the SA Marine Standards Association of SA (SAMSA) had found that its vessel complied with standards laid down by the World Organisation for Animal Health (OIE).

The livestock were able to lie down in their pens and did not suffer heat stress, he said.

“Vessels are equipped with state-of-the-art ventilation systems. These systems provide fresh air and remove excessive heat, humidity and fumes, such as ammonia and carbon monoxide.”

Animal welfare groups are over-stating the sheep numbers to be exported to give an impression of overcrowding on vessels.

Al Mawashi, which has exported 115,000 live animals from SA to date, claimed a mortality rate of 0.14% during its March shipment.

“It is much lower than the average feedlot mortality on South African farms,” said Ally.

The deal to supply livestock from the Eastern Cape to the Middle East was secured by the Eastern Cape Development Corporation (ECDC) as part of a long-term deal to promote trade and investment in the province.

The ECDC said the allegations of inhumane conditions aboard the ship were still to be heard in court and that the matter was sub judice.

Regarding the provisions on animal welfare laid down by the Animal Protection Act, the ECDC said it was “not a custodian” of the act and referred questions to the department of agriculture, land reform and rural development.

“For the record, the ECDC will also not comment on issues of animal welfare in the future, as these matters are in the jurisdiction of the department of agriculture, land reform and rural development,” it said.

The agriculture, land reform and rural development department said it was opposing the NSPCA’s court action and would reserve comment on allegations of inhumane conditions aboard the livestock vessels until the matter was heard in court.

On the matter of live animal exports, the department was guided by the Animal Protection Act of 1962 as well international guidelines from the World Organisation for Animal Health (OIE), said spokesperson Reggie Ngcobo.

"The department is not opposed to live animal exports to overseas markets. However, the exports must comply with all applicable laws and guidelines," he said.

Meanwhile, the livestock ship, Al Messilah, aboard which the sheep were to be carried to the Middle East, has been tied up in port for weeks while the dispute unfolds.

According to global ship-tracking website marinetraffic.com, the 186m vessel was built in 1980 and sails under the flag of Kuwait.

Her current position is shown as East London.

Some livestock carriers, many of which are former car carriers or container ships, with tiers of animal pens added to their steel decks, have been involved in high-profile disasters.

In December 2009, converted car carrier MV Danny F II, en route from South America to Syria with 10,224 sheep and 17,932 cattle aboard, capsized in heavy seas off the Lebanon coast, drowning all the livestock and 43 of the 83 people aboard.

In November 2019, just 180 sheep out of 14,300 on board survived after Romanian-registered livestock carrier Queen Hind capsized in port before setting sail for Libya.

EDITORIAL | The stench of toxic masculinity shows no signs of lifting