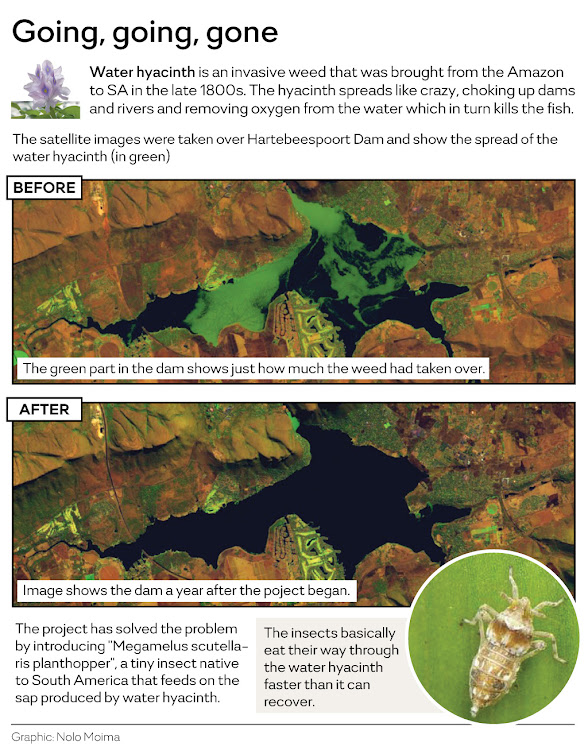 Keneilwe Sebola was driving past Hartebeespoort Dam one day when she saw it – a green carpet of choking water hyacinth almost entirely blotting out the dam’s surface.

A journalist and budding scientist, Sebola was shocked and intrigued by the sight.

“When I drove past the dam, I thought, ‘what is this plant?’ because I hadn’t seen any articles about it.”

She started reading scientific journals that in turn brought her to Rhodes University, where she applied to study for a PhD with water hyacinth as her project.

“Initially I wanted to see what the plant could be used for,” she said.

Martin Hill, director of Rhodes’ Centre for Biological Control told her he did not advocate for use, partly because of the sheer cost of harvesting it.

Instead, Sebola and Julie Coetzee, the centre’s deputy-director and manager of its aquatic weed biological control programme, worked out a plan to introduce millions of South American insects into the water at the dam in a bid to end the water hyacinth scourge.

It is notoriously known as the world’s worst aquatic weed. It has this beautiful flower so people handed it around to friends, and it ended up in ponds where it would take over.

Water hyacinth is native to the Amazon Basin. It was introduced around the world as a decorative plant and, quite simply, took over all its new habitats.

“It is notoriously known as the world’s worst aquatic weed,” said Coetzee.

“It has this beautiful flower so people handed it around to friends, and it ended up in ponds where it would take over,” said Coetzee.

“People would chuck it into rivers and that’s pretty much how it spread.”

First introduced to the Cape in 1910, the plant affects water quality, clogs pumping equipment in dams, starves fish of oxygen and threatens biodiversity.

In the 1970s, the weed was being controlled on the dam by spraying herbicides.

“They could keep it under control, but that was before burgeoning populations, and increased farming led to the addition of nutrients in the form of ammonia, nitrates and phosphates to Hartebeespoort Dam,” said Coetzee.

The nutrients acted as a fertiliser and the water hyacinth continued to spread. When spraying finally stopped in 2008, the plant exploded across the dam.

Faced with the prospect of having to use ever more quantities of harmful chemicals, scientists had already been investigating a biological control method that involves the use of natural enemies to keep an invasive species under control.

Enter Megamelus scutellaris planthopper, a tiny insect native to South America that feeds on the sap produced by water hyacinth.

The first step was to ensure that introducing another species did not cause another environmental catastrophe.

Most plants are associated with a herbivorous insect that can only feed and complete its life cycle on that plant.

“It’s not a like grasshopper that will mow through your entire garden,” said Coetzee.

The risk of these biological control agents hopping onto something else is virtually zero.

The next step was to get permits to import the insects, under strict quarantine conditions, after which testing could begin to ensure the insects were specific to the water hyacinth and would not feed on anything else.

The final step was to get official permission to release the insects into the environment.

“The risk of these biological control agents hopping onto something else is virtually zero,” she said.

The insects were first grown in the lab at Rhodes before being dispatched by overnight courier to Sebola, who had set up the greenhouse-like tunnels that contained pools of water hyacinth where the planthoppers would be raised.

Her next job was to get access to chosen sites from the landowners on the dam’s shores.

“I had to do a lot of introductions. I had to drink a lot of tea and coffee – people around Harties are very polite, and they want to get to know you and hear about your project,” she said.

With the help from two local schools that had integrated the project into their science curriculum, Sebola released about 10,000 planthoppers every week onto the dam over eight months.

The biological control worked. While the project took three years to set up and required extensive certification and permits from the authorities, once the insects were released into the habitat, they worked fast to reduce the plants’ spread.

Within a year the plants, which had covered almost 50% of the dam’s surface area, had died back to about 20%.

“It’s been brilliant – it was so quick,” said local resident and kayaker Robbie Herreveld, who lives on the western shores of the dam.

“There are a few spots [of hyacinth], but it’s very small.”

Herreveld said the water quality in the dam had improved dramatically, with 2m visibility in some places.

It’s been brilliant – it was so quick.

His only concern was if the absence of the water hyacinth would result in increasing algae in the water.

“The question is, what happens now?” he said. “We’ll find out in the summer.”

The project’s success will see the insects deployed on other dams such as Roodeplaat and Morula and other places battling with invasive plant species.

It was unlikely that Hartebeespoort Dam would ever be totally free of water hyacinth, said Coetzee.

“The point of biocontrol is not eradication,” said Coetzee. “We’ll never get rid of water hyacinth on any water system in the world.

Instead, it is a balancing act in which two species from another continent fight for survival.

With brushes and paint, these Joburgers have ...