SPECIAL FOCUS | Six months into the pandemic, this is what we ...

SPECIAL FOCUS | Six months into the pandemic, this is what we know 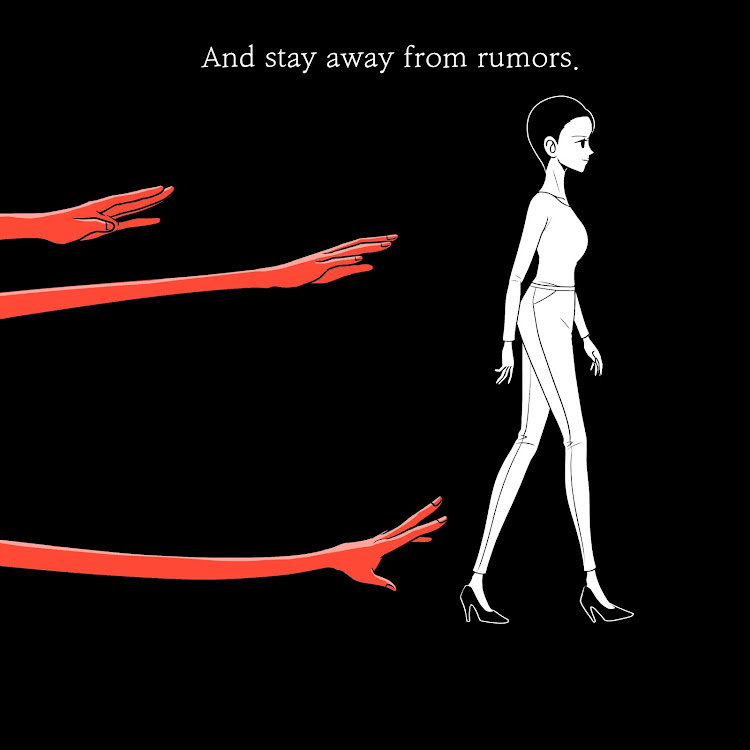 The long arm of Covid-19 The devastation the virus can cause to the human body has become clearer over the past few months, but there's a long way to go.
Image: United Nations

It’s an image that’s lodged in sleepless heads across the globe: a crowded market in Wuhan at the height of the Chinese winter, a bat carrying a microscopic parasite with a spiked surface and a single moment in time when that same virus entered a human body doing just what its ilk are programmed to do: find a host to survive, thrive, replicate ... and spread.

That was December 2019. By January 2020, it was being seeded across the globe and, overnight, strangers and loved ones alike became a potential threat and the concept of social distancing quickly caught on.

But half a year later, scientists are still working around the clock to understand the disease’s catastrophic spread, its short- and long-term effects on the human body and how to stop it.

Airborne transmission is the new culprit when it comes to super-spreading.

You don’t have to be in direct contact with someone to breathe in contamination that stays in the air for up to two hours. “How efficiently the virus is transmitted between people and the different possible routes of transmission has been a key issue,” Prof Shabir Madhi, the lead researcher on Covid-19 vaccine trials in SA, told Times Select.

It was established quickly that the respiratory droplets of someone standing near you could infect you if they sneezed, coughed, spoke or sang, according to the World Health Organisation (WHO).

It soon became clear, however, that some other form of spread was taking place and all eyes fell on surfaces.

That’s why we are agitating for the use of face masks.

One study, for example, found that “it took only 10 hours for the virus to spread from a single hospital bed rail to the whole ward – including door handles, arm rests and books – and then stayed there for another five days”, said the researchers.

But lately the gaze of scientific investigators has shifted. “Before, we thought contaminated surfaces were the main problem, but subsequently we’ve come to understand the virus’s ability to move between people through tiny droplets that stay in the air. That is why we are agitating for the use of face masks, but it was not like that in the initial phase,” said Madhi.

This latest understanding of airborne transmission is, “to some extent, a game changer”, he said. “You could inhale contaminated micro-droplets from an infected person without standing opposite them and speaking to them.”

Aerosolised droplets can stay in the air for up to 10 minutes and, where ventilation is poor, even two hours. You could breathe it in long after the person has left the room,  he said.

So we know that direct droplets, surfaces and airborne transmission are all playing their role, but “the last one would probably explain the type of super-spreader events, where one person infects 40 or 50 others”. 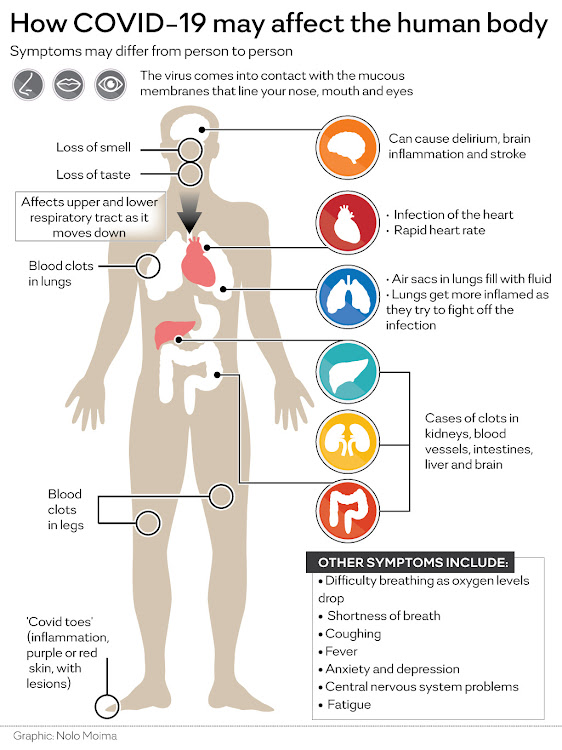 Mapping the menace This is how Covid-19 affects the body.
Image: Nolo Moina

The learning curve has been as steep when it comes to the effect of the virus on the human body. If scientists and citizens have learnt one thing over the past six months, it’s that Covid-19 is unpredictable. You could drop a pin anywhere on the spectrum from “asymptomatic” to “horrible death” and you’ll find large data sets to illustrate the point.

The havoc it causes on the lungs is well established, but over the past six months scientists have slowly been able to map the catastrophe of Covid-19 across the entire human body. Blood clots have shown up as a major player: in South African hospitals and other countries, many Covid-19 patients in ICUs have developed blood clots. Prof Elvis Irusen, head of pulmonology at Stellenbosch University, said coronaviruses “activate the clotting system of the blood” and this can cause “bleeding and a blood clot (thrombus).”

Previous studies have shown that patients with swine flu and other “very sick patients with severe viral pneumonia and acute respiratory distress syndrome” who were admitted to hospitals were shown to have a 23-times-increased risk for pulmonary embolism (when a blood clot from elsewhere in your body, such as a vein in your leg, travels and lodges itself in the lung). SA is one of a few countries doing forensic pathology studies on clotting in the bodies of those who perished from Covid-19, but over the past six months it has also become clear how many survivors of the disease have also suffered from clots.

According to Jeffrey Laurence, a professor at Weill Cornell Medicine in the US, who is studying this topic, clinicians worldwide are observing “clots in small vessels, deep-vein thrombosis in the legs, clots in the lungs and stroke-causing clots in cerebral arteries” among Covid-19 patients in ICUs. He said this is despite the monitored use of blood-thinning drugs.

Then there’s the heart. New research has shown that a fifth of all Covid-19 associated deaths are from cardiac complications, but the mechanisms behind this remain somewhat mysterious. “One hypothesis centres on the infection of the heart itself, but the understanding of which cells may be infected is unclear,” according to Nathan Tucker, a lead researcher on a University of Pennsylvania study.

Another recent finding is that the virus may attack a patient’s central nervous system and that “depressed mood and anxiety may be symptoms of Covid-19’s impact on the brain”. This is from an international study led by the University of Cincinnati.

The researchers say “these two psychological symptoms were most closely associated with a loss of smell and taste rather than the more severe indicators of the novel coronavirus, such as shortness of breath, cough or fever”. Lead researcher Ahmad Sedaghat said: “None of these symptoms that portended morbidity or mortality was associated with how depressed or anxious these patients were.

“The only element of the virus that was associated with depressed mood and anxiety was the severity of patients’ loss of smell and taste. This is an unexpected and shocking result.”

He said there may be more bad news to come on how the virus is attacking the central nervous systems of those infected. The virus has also been around long enough for patients to report on the longer-term effects on their general wellbeing.

Many could only feel jealousy towards the asymptomatic as they continue to experience fatigue and brain fog months down the line after “recovery”.

Now called post-viral syndrome, it may be related to cytokines that have crossed the blood-brain barrier and affected the brain. Cytokines are substances secreted by cells in the immune system and they can have a strong effect on other cells.

US official immunologist Anthony Fauci, who has become a household name globally for standing up to the non-scientific spin of that country’s president, Donald Trump, spoke recently at the International Aids Conference, where he said post-viral syndrome was “potentially debilitating”. He said “brain fog, fatigue and difficulty in concentrating” are the symptoms of post-viral syndrome and that this is something which will “seriously need to be looked at” in the midst of the pandemic.

The other burning issue six months down the line is that of immunity. To what extent are the people who’ve been infected across the globe immune to being reinfected? “We are still not clear on how long immunity persists,” said Madhi. “The majority of those who become infected - two-thirds - are asymptomatic or have mild symptoms, and what’s been shown is that these people have a poorer immune response.”

He said the antibody they produce is of a lower level and lasts for a shorter time than those with severe disease. He concluded: “We remain vulnerable to repeat outbreaks until a vaccine becomes available.”

That could be more than two years away, so don’t hold your breath, but do wear a mask.

The ANC has turned us into happy criminals, just like its cadres