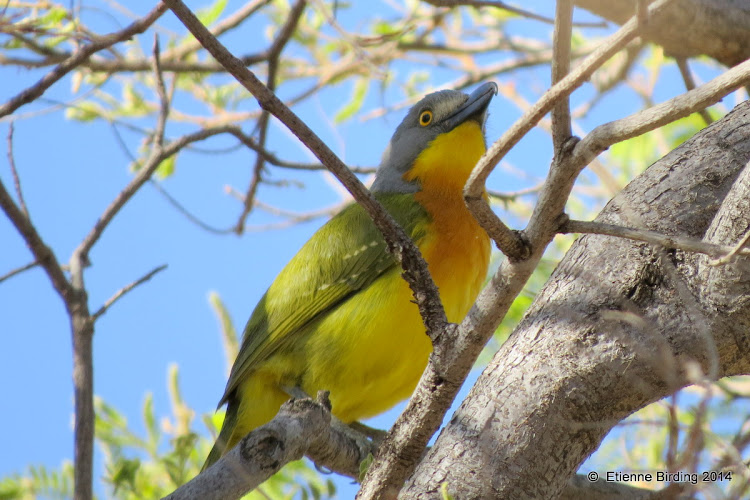 Lockdown has seemingly given the Grey-Headed Bushshrikes enough wind beneath their wings to venture into the suburbs.

And avid birdwatchers are so happy to see the bird flapping its wings in their neighbourhood, they might even be swayed to overlook its horrific tendencies – such as displaying its prey on spikes.

Data collected on the bird by the Southern African Bird Atlas Project 2, a database mapping bird sightings, populations and movement, has shown a recent increase in sightings and recordings of the Grey-Headed Bushshrike of up to 20% in Roodepoort.

In the Joburg CBD there was an increase of 5% in sightings and 2.5% in the rest of the city. This is calculated from a 0% base in 2007, the year of the first sighting in Joburg.

Dip, or dipping, is a term used by bird watchers when they go looking for a particular bird (and some birders travel thousands of kilometres) but don’t see it. It describes the blues or depression that can come from the disappointment. Bird guide Etienne Marais said the experience could be traumatic.

Its general habitat is wooded savannahs and riverine forests, but experts believe the man-made forest that is Johannesburg offers an enticing new ground for the colourful bird to flourish now that human movement and vehicles have slowed down.

But Etienne Marais, a well-known SA birding guide and birding author, predicted the birds would now hang around even after lockdown has ended.

“Gauteng is a world-class birding region, and the diversity in the urban areas like Johannesburg is increasing because of the urban forest. Joburg used to be a grassland; many of the common birds we see today were not around until recently. Birds like the hadeda we only started seeing here in the 1970s. The Grey Lourie also arrived in the 1970s.

“I remember there was a whole excitement over a Paradise Flycatcher, the first nesting pair was found in Forest Hill in about 1974, and everyone went to this garden to see it. Other birds that have arrived more recently are the Golden-tailed Woodpecker, African Harrier-Hawk and Grey Hornbill.”

He lauded “citizen science” for the data on the changing populations of birds. People were keeping records of what they saw and heard, and submitted the information to the bird-sighting projects.

Marais said because birds were tuned in to human behaviour, they would have learned it was safe to be around.

They have learned that there are fewer cars on the road, so they are more active then. That’s why we see and hear so many of them during lockdown.

“Birds adapt quickly to our cycles. You may notice more birds on weekends. They have learned that there are fewer cars on the road, so they are more active then. That’s why we see and hear so many of them during lockdown.”

He said the Grey-headed Bushshrike would be identified more often by sound because it preferred to hide in dense trees.

Although Bird Laser app creator, Henk Nell, agreed that while its population had increased in Johannesburg, people also now actually had more time to notice the new arrivals.

“It may very well be due to the fact that people spent more time birding during the lockdown, whereas previously, people spent time at work or birding outside the city.”

Data from the app is incorporated in conservation recordings and, according to the data, there was one sighting and 55 records of the bird in Joburg during the level 5 lockdown.

As a comparison, there were 201 identifications of the bird throughout SA in 2019 and 213 the year before, according to collected data.

Nothing to shrike home about:

SA has 21 regularly occurring shrike species. The boldest in colour are the Bushshrikes with their bright yellow and green plumage.

He said Joburg was a safe space for birds to move into because their environments in rural areas were being destroyed – and city birds were easy prey.

“Birds in the city are often fed by people, they become less skittish and so are easy prey for shrikes.”

The Grey-headed Bushshrike is not endangered but elusive and is celebrated by birders because of its beautiful grey, green, yellow and orange colouring. They have a bloody ritual of impaling prey, such as insects, lizards, snakes, mice and bats, on to spikes from tree thorns or on barbed wire fences.

Their hooked beak is specifically designed for this purpose, the experts explained. As carnivores, shrikes do not have powerful talons to hold prey down while they feed, so by impaling prey they are able to tear the flesh apart. These unfortunate critters are often displayed together as a sort of food store. Certain poisonous insects are also impaled and left for days because they lose their venom as they decompose.

Itch to twitch: birding takes off with teens

EDITORIAL | The first step is admitting we have a problem