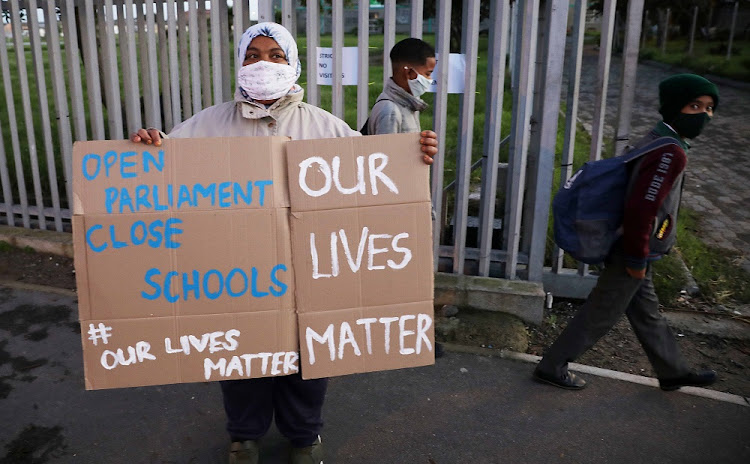 A spike in Covid-19 infections at schools and parents’ reluctance to send their children back to class has forced many pupils to stay away.

The National Professional Teachers’ Organisation of SA (Naptosa) and the South African Principals’ Association said many schools had recorded pupil absentee rates of between 30% and 40%.

Grades R, 6 and 11 pupils returned to school last week after grades 12 and 7 were phased in on June 8.

The results of a snap survey by Times Select has also confirmed high absentee rates at some schools last week. Among these were:

Thousands of Grade R, 6 and 11 pupils could also not return to class last week because hundreds of schools were closed after pupils and teachers tested positive for Covid-19.

Residensia Secondary in Sebokeng, Gauteng, which has remained closed since June 18 after a teacher tested positive for Covid-19, could not accept 197 Grade 11 pupils back last Monday.

The 225 matrics at Residensia Secondary have received only one full day of lessons since schools reopened on June 8, sparking fears that teachers won’t be able to complete the syllabus on time.

Dear Angie, it’s time to declare the school year over!

Just swallow your pride and do it, minister Motshekga. If you don’t, there’ll be a far worse blot on your record
Ideas
1 year ago

At Iteko Special School in North West, the 153 Grade 5s, who were to have returned last Monday, were only returning on Monday after five teachers tested positive for Covid-19.

A teacher from Boikagong Primary said parents “remained sceptical” about sending their children back to school for fear that they might contract the virus.

A teacher at Residensia Secondary said they were still awaiting their results after they were tested by clinic staff on June 18.

“Pupils’ education is suffering and we feel very sorry.”

Chrissie Virasamy, a history teacher at Southlands Secondary, said that since schools reopened on June 8 they had two cases of Covid-19 infections soon after each other.

“As a result, the fear and anxiety among parents has increased and confidence has taken a knock.”

As a result, the fear and anxiety among parents has increased and confidence has taken a knock.

David de Korte, national president of the South African Principals’ Association, said colleagues had indicated that between 50% to 60% of pupils were attending school.

“Matrics seem to be coming because they’re scared they not going to have their syllabus cut in any way.”

He had a “60% non-arrival” for his maths class last Wednesday.

“In the Western Cape everyone is talking about the infections peaking either now or in the next few weeks so I think parents are saying it’s safe to keep my children at home.”

“It’s not true that the return rate of pupils has been fantastic.”

The Eastern Cape, which did not phase in grades R, 6 and 11 last week, encouraged principals to make parents aware that they may apply for exemption from school attendance for their children.

On June 25, basic education minister Angie Motshekga told the National Council of Provinces that 98% of pupils in Grade 12 and 7 had returned to school.

Save the Covid sermons for Sunday school, ...