Pule, who was expecting her first child, was found hanging from a tree with a stab wound to her chest 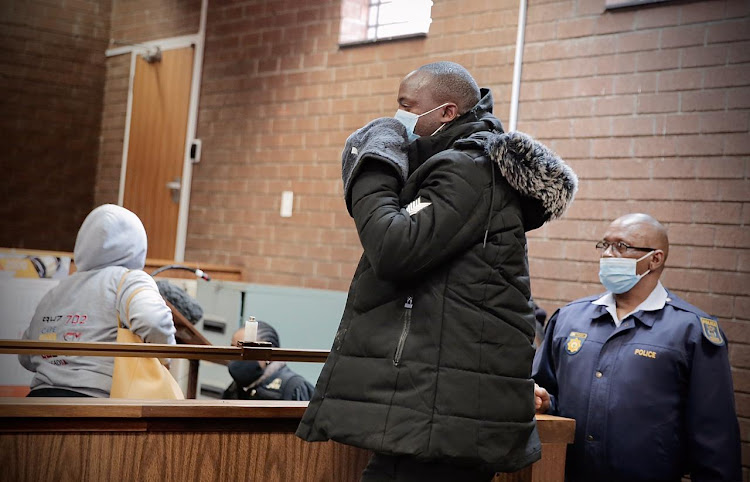 IN THE DOCK Muzikayise Malephane, 31, has been charged with murdering Tshegofatso Pule.
Image: Sebabatso Mosamo/Sunday Times

Before court proceedings got under way, photographers were allowed to take pictures of Muzikayise Malephane, who sat with his head in his hands in the dock. He covered his face with a grey beanie.

Malephane was arrested while travelling to Gauteng from Mpumalanga.

The 31-year-old, dressed in a black jacket with grey fur hoodie, sobbed as cameras clicked in the courtroom where Pule’s family had gathered to see the man accused of stabbing and hanging her.

Police stood to the sides.

As proceedings started, magistrate John Baloyi asked Malephane if he had a legal representative. He indicated he would apply for legal aid.

“Are you going to apply for bail?” asked Baloyi.

Malephane shook his head and answered softly: “No”.

Pule, described as a “bubbly and happy soul”, was found hanging from a tree with a stab wound to her chest on June 5 in Durban Deep, Roodepoort. She was eight months pregnant with a daughter, her first child.

She was buried on Thursday last week.

Tshegofatso Pule: 'It was horrible,' says former morgue worker who...

The matter was postponed until June 24 for Malephane to obtain legal representation.

After his appearance, Pule’s uncle, Tumisang Katake, said though the family was in pain, they were ready to hear about her last moments.

Katake said the family did not know Malephane or whether Pule knew him.

He said they did not know if there was more than one suspect or why Malephane did not apply for bail.

“I am not sure what is going through his mind for not applying for bail, but all those details will unfold. We will wait until the trial resumes.”

We are preparing ourselves for a difficult journey ahead, of having to relive the last moments of Tshegofatso - her last moments on Earth.

Katake said the family was still battling to come to terms with Pule’s gruesome murder.

“It is difficult for us. Tshego was meant to deliver any time, but little did she know she would be killed in the manner that she was.”

The police have given little information on how Malephane is connected to Pule’s case.

Gauteng provincial police commissioner Lt-Gen Elias Mawela praised detectives for their swift response and appealed to communities for information that could lead to more arrests.

Pule’s killing has sent shock waves around the country and made headlines internationally, leading to protest marches and calls for more action against gender-based violence.

Katake said the family was grateful for all the support and calls for action and justice.

On Wednesday evening, President Cyril Ramaphosa described the scourge of gender-based violence as another pandemic.

“Over the past few weeks no fewer than 21 women and children have been murdered. Their killers thought they could silence them.

“But we will not forget them and we will speak for them where they cannot. We will speak for Tshegofatso Pule, Naledi Phangindawo, Nompumelelo Tshaka, Nomfazi Gabada, Nwabisa Mgwandela, Altecia Kortjie and Lindelwa Peni, all young women who were killed by men,” said Ramaphosa.

“We will speak for the innocent souls of Tshegofatso Pule’s unborn daughter who had already been given a name, six-year-old Raynecia Kotjie and the six-year-old child found dead in the veld in KwaZulu-Natal. They are not just statistics. They have names and they had families and friends. This evening, our thoughts and prayers are with them.

“I want to commend the South African Police Service for their excellent work in arresting almost all of the alleged perpetrators. As these suspects make bail applications this week, I have the utmost confidence that our courts will send the strongest of signals that such violence has no place in society,” said Ramaphosa.