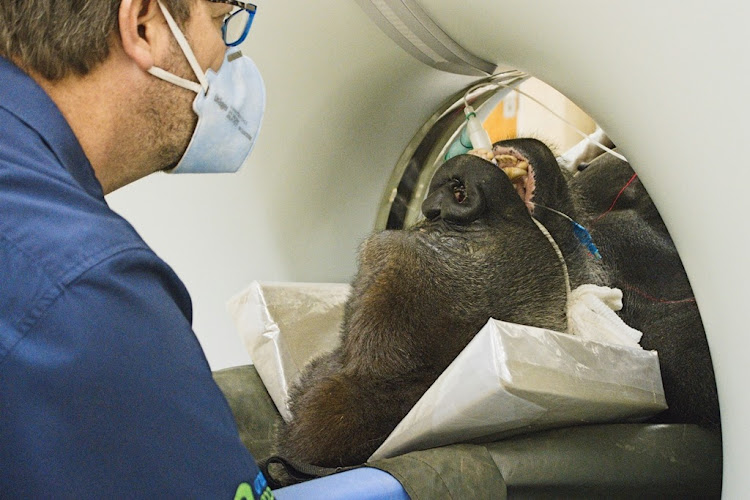 As a chopper whirred over the cityscape between Johannesburg and Pretoria, a 209kg silverback gorilla named Makoko slumbered in the cabin.

But as the 35-year-old primate, a resident at Johannesburg Zoo, lifted off for a CAT scan at Onderstepoort Veterinary Academic Hospital in Pretoria, handler Katharine Visser wished she could have been with him to hold his hand.

“I was with him when he was darted before the flight. If I could have held his hand the entire time I would have, but there just wasn’t space,” she said.

Visser, curator of primates at the zoo, said she and the “gentle giant” had developed a special bond over the past decade.

“He doesn’t really enjoy strangers, but he loves the people he works with. We care for him deeply,” she added.

In May, vets at the zoo discovered growths in his nasal passages after the Western lowland gorilla couldn’t shake a runny nose.

Given his heft and the dangers associated with transporting wild animals over long distances, his minders looked to the sky for an answer.

After weeks of planning, an orchestra of doctors, veterinarians and zookeepers sedated and anaesthetised Makoko, before he was loaded into the helicopter. 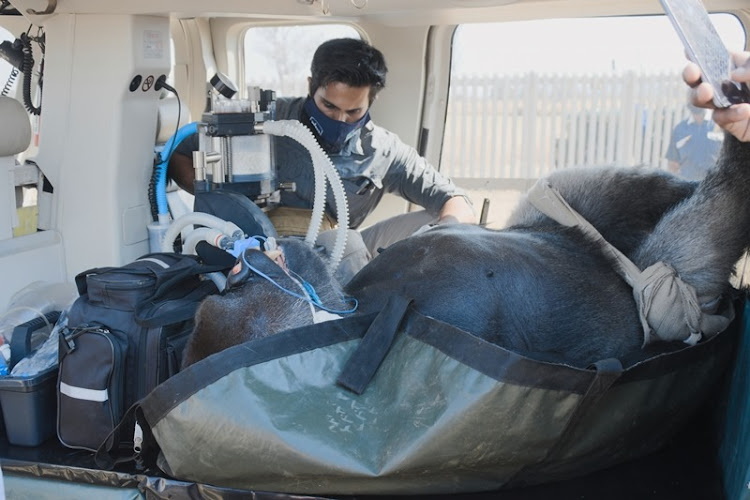 Almost up and away Johannesburg Zoo veterinarian Dr Kresen Pillay monitors Makoko after he was loaded into a helicopter at the weekend.
Image: Supplied

“He was sedated with gas and it worked really well, but we had a drip up and injectable sedatives prepared in case something went wrong,” veterinarian Dr Kresen Pillay said.

“He slept really well and he never showed signs that he might come to. This boy could have made history and he knows nothing about it. He slept through one of the highlights of his life.”

Pillay said the team was unable to find records of gorillas being transported by helicopter while anaesthetised and that Makoko may be a pioneering primate.

The hastily executed scan and other tests revealed the animal was bunged up because of inflammatory polyps, a common occurrence in humans.

“We had an x-ray, but they’re not sensitive enough to really give us a gauge of their size and placement. For that we needed a CAT scan.”

Pillay added that they were now prepping for a surgical procedure to remove the growths.

“The sooner we do it, the better, so we’re giving him three weeks to recover from the anaesthesia,” he said.

While he convalesces, Visser and her team report that he is in high spirits.

“He loves his rooibos tea with honey and lemon, and he really enjoyed it on Sunday after he came around from the sedation,” she said.

Makoko came to the zoo in 2006 from a facility in Germany, his movement facilitated by the European Zoo Association, which runs a stud book for Makoko and his species, she said.

“When he arrived with us, we had two others named Max and Lisa, who both died shortly after that. Sadly, he has been with us on his own since then and because of that, it’s up to us to become part of his troop.” 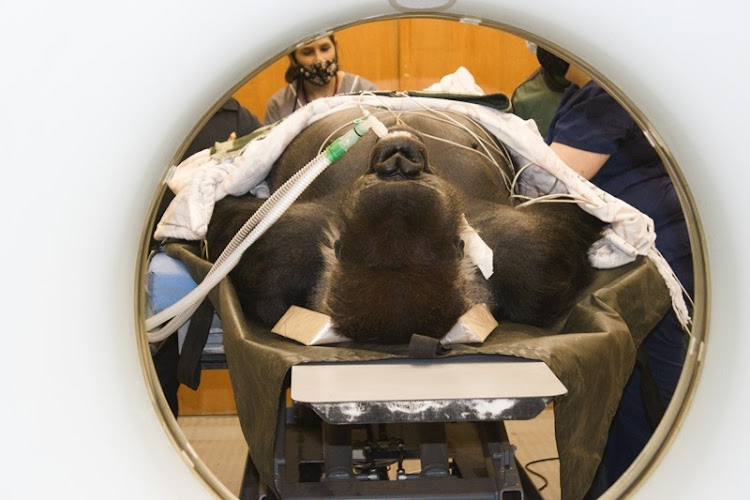 big boy Makoko in the CT scanner at the Onderstepoort Veterinary Academic Hospital, where he underwent diagnostic treatment for growths in his nasal cavity.
Image: Supplied

“That’s the reason we have a very strong bond ... he’s a gentle giant,” Visser added.

Part of the get-well fare delivered by his keepers were bananas, which he devoured shortly after they were dispatched to his enclosure.

“Bananas, strawberries, grapes and peanuts are at the top of his list, but we ensure he has a varied diet. Because these fruits are high in sugar, we try to limit the treats,” Visser said.

In the three weeks between his flight and surgery to remove the growths and figure out the cause of them, Makoko will spend his time lounging in the sun and enjoying some music.

“He has a TV in his night room, but he’s not really enamoured by it because he has a short attention span. I play him music on my phone and he enjoys that. I don’t know whether he’d have a preference when it comes to artist and genre.

“He is the leader of the troop and we are his followers,” Visser said.

How to put sunscreen on a lion? With a paintbrush ...

That killer smile could be a fatal blow for the ...

WATCH | What went through Tshabalala’s mind during ‘that’ 2010 goal?