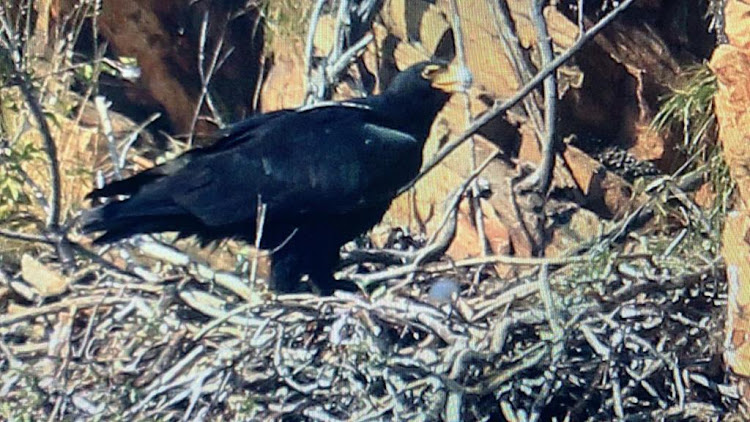 Serious mom Makatsa on the nest, above the rim of which her new fluffy chick's head is just visible.
Image: The Black Eagle Project Roodekrans

New feathered couple Makatsa, 8, and Mahlori, 6, have welcomed a fledgling into the world after 2019’s drama around the death of Makatsa’s former mate Thulane, 26, and their 53-day-old chick.

After a 10-month courtship the black eagle (Verreaux’s eagle) breeding pair at the Walter Sisulu National Botanical Garden in Roodepoort, Johannesburg, have begun their journey as parents.

Black Eagle Project chairperson Gerald Draper told Times Select one of their volunteers had spotted a new chick on Sunday.

“Should all go well over the next three months, the juvenile will possibly fledge in the first week of September if it is a male, or a little later if it is a female.”

He said the egg had probably been laid on April 18 or 19.

According to the Black Eagle Project, the female sits on the eggs 70% of the time, and the pair will eat prey away from the nest so they don’t damage the eggs. Prey is brought to the nest a few days before hatching.

However, only one chick survives, through a process called caininism (from the biblical story of Cain and Abel), where the first chick to hatch is the stronger and will eventually kill its sibling by intercepting all food offerings.

Black Eagle Project volunteers took on an essential-service role during lockdown to monitor the nest. Before lockdown the volunteers visited the garden daily to monitor the pair’s movements. This task has been performed officially since 1988, but by watchers since the 1940s when the nest below the Witpoortjie waterfall was first spotted. 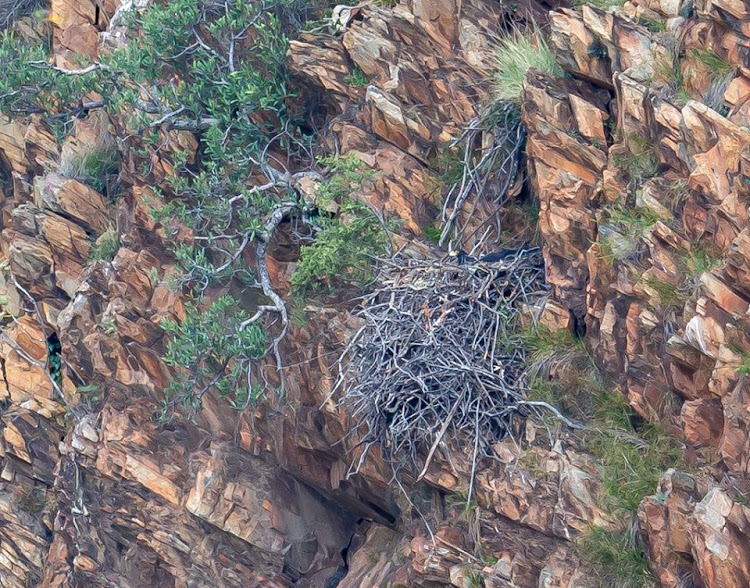 Can you spot the yellow beak? Makatsa sits on the eggs on April 21 2020.
Image: The Black Eagle Project Roodekrans

Volunteer Tony de Castro reported on April 22 that he believed an egg had been laid.

In a post he said Makatsa, the female, spent about 10 minutes on the nest. “This almost certainly means she has started incubation.”

Usually, the birds hunt for food, spending very little time at the nest until the eggs are laid. The pair were seen on April 10 creating a suitable nest for breeding by lining it with spray (the soft leaves from the tips of branches).

Draper said on Facebook on Monday : “Although lockdown regulations curtailing movement are frustrating, the volunteers on the project are ecstatic with the news, and are looking forward to resuming their monitoring duties as soon as possible.”

Soaring into the news

The eagles made headlines in 2019 after Thulane disappeared on June 8.

After a few days it was determined that he had died, although his body has not been discovered.

At the time Draper said his death would not have been natural because the eagles are known to live up to 60 years in captivity. He believed Thulane could have crashed into rocks, eaten poison or fallen foul of power cables.

Makatsa made history when she became the first black eagle without a mate in recorded history to continue to sit on her egg until it hatched, on June 13. Usually the female kicks out the newborn when a new suitor announces himself.

Flocks of visitors from all over the word descended on the gardens to watch the spectacle and were rewarded further when Makatsa brought in new mate, Mahlori, from July 13 who helped her look after the chick.

Before then black eagles had not been recorded to adopt another male’s chick.

As the pair began to build their own new nest, just above the original structure, Makatsa wouldn’t let the male near the chick. However, Mahlori plunged down  on August 4 and killed it.

The chick’s death was captured in a photographic sequence by local Veronica Adamson. It showed Mahlori swooping onto the nest and grasping the 53-day-old chick with his long, deadly talons. The remains were found 80m below the nest. 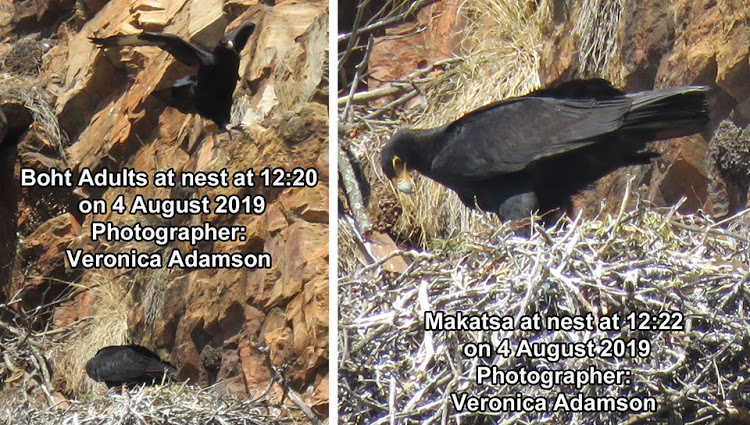 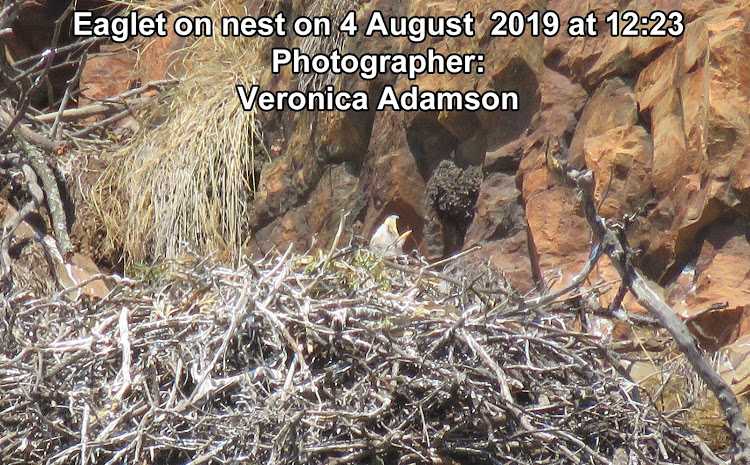 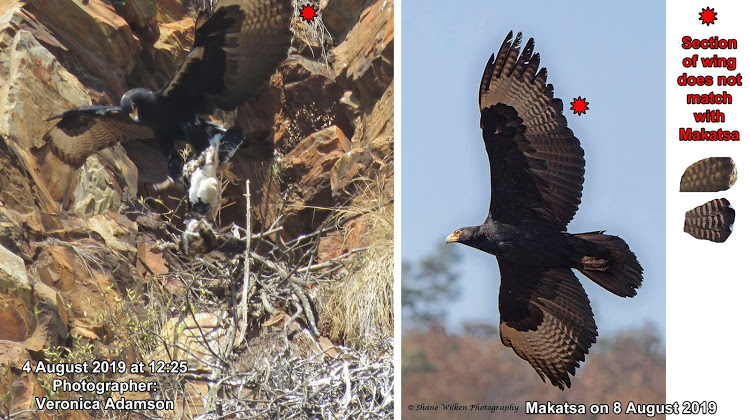 “The eaglet was then taken to the spot where some of the remains were recovered, and we also now have eyewitness accounts of him having fed on the carcass,” Draper said.

The Black Eagle Project in Roodekrans says sightings of the eagles at the garden have been recorded since the 1940s.

They were not officially recorded until 1988 when Dr Gerhard Verdoorn, of the Raptor Conservation Group, began recording information.

Emoyeni (meaning “upon the wind”) was the first female to be recorded – the first sightings were recorded in the 1970s. Her first mate was never recorded but her second, Quatele ( “the cross one”, named for his fierce, piercing eyes), was a much-loved raptor.

He disappeared in 1998 and Emoyeni was seen scouring the ridges looking for him. Volunteers never found his body.

Her third mate, Thulane (“the shy one”) came onto the scene that year.

Loraine Ndzondo, who has worked at the Walter Sisulu Gardens since 1992, said there were people who came every day just to watch the eagles.

It’s all over for Walter Sisulu’s chick

Overly sensitive? It could be in your genes