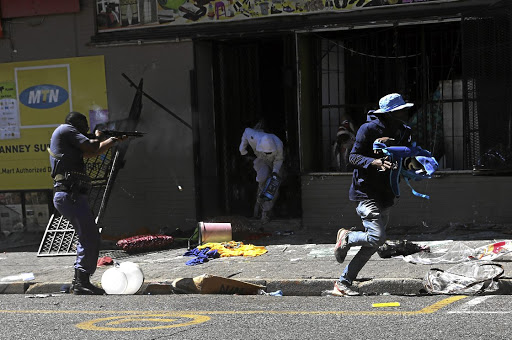 Targeted anger Human Rights Watch says SA's five-year national action plan to combat xenophobia and other crimes, while an important step, fails to address the lack of accountability for xenophobic crimes and has no clear implementation strategy. In this 2019 photograph, police take on looters in Katlehong during a wave of attacks on foreign-owned shops.
Image: Alon Skuy

As SA joined the global #BlackLivesMatter protest this week in the wake of the death of black American George Floyd by a white police officer, foreigners living in this country remained unconvinced.

Instead, they argue, they have been repeated victims of xenophobic violence – calling into question just how genuine South Africans’ participation in the movement really is.

Following Floyd’s death, SA's international relations and cooperation minister Naledi Pandor said the government had sent its condolences to Floyd’s family, and called on the USA to address systemic racism against black people.

“The regrettable death of Mr Floyd presents the USA with an opportunity to address fundamental issues of human rights such as freedom, dignity and equality. Just as the people of America supported South Africa in its legitimate struggle against apartheid, South Africa too supports the clarion calls for practical action to address the inadequacies highlighted by protesters, civil society and human rights organisations,” said Pandor.

However, many African foreign nationals said this comment was futile given how they were treated.

‘All we want is help, any kind of help’: refugees tell of double betrayal

Having fled unimaginable horrors in their own countries, now they face xenophobia and hostile Pretoria cops
News
2 years ago

Kwanisayi Mandimutsira, a student of Zimbabwean descent who lives in Durban, said there was a contradiction in SA denouncing racism but turning a blind eye to xenophobia on its own shores.

“At first I didn’t want to bring attention to the fact the SA government and its people aligning themselves for #BlackLivesMatter movement. I didn’t want to detract from the solidarity of support. But as it sat with me longer, I felt it needed to be addressed,"

“How can you claim black lives matter when you do nothing to protect African nationals within your borders?” said Mandimutsira.

She said she felt that hers was not one of the black lives that South Africans meant when sharing the hashtag or supporting the movement.

“We have been trying to push anti-xenophobia movements since forever. Which black lives do they mean? To South Africa, black foreign lives don’t matter,” said Mandimutsira.

Sarah Kanamugire, who is of Burundian descent, believes the SA support for the #BLM is important, but with the xenophobic violence in the country it was watered down.

How can you claim black lives matter when you do nothing to protect African nationals within your borders?

“We have seen countless cases of black African foreigners being viciously killed. The evident support for the #BLM movement has been sensational; I just hope that it changes the perspective of xenophobic people.

“Black lives matter, regardless of whether a person is from America or Africa,” said Kanamugire.

She said she said experienced xenophobic micro-aggressions throughout her life, and believes that African lives need more consideration while SA continues its support for black American citizens.

“Even though I was born and raised in Durban and spoke fluent isiZulu, I was disparaged. As I grew older I learnt to conceal my identity [as a foreign national] as a protective measure. I would be safer than if they knew the truth.

“I don’t want to generalise about all South Africans. However, there is a disturbingly high number of people who don’t recognise that all black lives matter,” said Kanamugire.

Rwandan South African Tania Kubwimana believes that although solidarity is important there should be consideration for refugees and asylum seekers.

“From a very young age xenophobic slurs were directed my way wherever I went. Not every South African is guilty of this but many are indifferent towards the struggle of a refugee.

“South Africans and the government need to keep the same energy they have towards #BLM and address the numerous failings of a system to protect the most vulnerable black lives within the country,” said Kubwimana.

ANALYSIS: Is failure to fight xenophobia ...

Fear and looting in Soweto: inside the latest ...