SA struggle veteran bludgeoned, shot in groin during LA protest against the killing of George Floyd 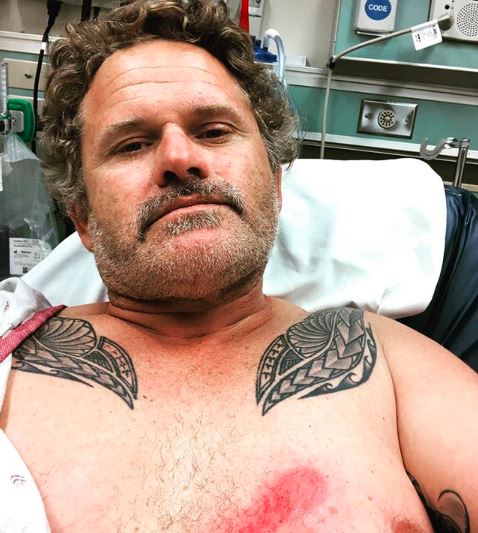 BRUTALITY Apartheid activist Bradley Steyn shows the spot to his chest where he was hit by a police baton. The photo was taken right before his emergency surgery to save his left testicle, after he was shot close-range rubber bullet by Los Angeles police on Sunday.
Image: Supplied

Having survived the Strijdom Square Massacre as a teen and the apartheid government as a young man, Bradley Steyn barely survived with his life on Saturday as a “peaceful” march against police brutality in Los Angeles turned brutal.

Steyn was beaten and shot in the groin by a rubber bullet fired from a metre away by a policeman after he tried to stop a fellow officer from beating a woman.

He was immediately rushed to hospital to repair his left testicle. Doctors saved his life, but he may not be able to produce children in the future.

Steyn, speaking to Times Select by phone from his home on Tuesday, explained that he was initially excited to take his daughter, 10, with him to the protest. He believed that, unlike when he was a young man, his daughter would witness a peaceful protest and a moment in history.

He said it was ironic that despite having escaped assassination attempts in SA and despite still receiving hate mail, he was injured at a peaceful rally in the US.

“At the last minute I decided not to take her. I am glad, and I definitely wouldn’t have even thought about it if I knew what would happen. But nobody could have predicted what happened that day. Brutality is inherent in the police culture and the way they approach suspects – what I witnessed sent me over the edge.

“Police used batons to a young woman who was sitting on  her knees.

“I tried to get him off her, and I was hit across chest by a police baton. A policeman saw me trying to physically push the cop off her and hit me in the chest. Then he aimed for my genitalia – he was two or three feet away – and shot directly into my genitalia.”

Steyn is the co-author of a book published last year, Undercover with Mandela’s Spies: The Story of The Boy Who Crossed the Square, which is centred on the day he witnessed Barend Strydom, the Wit Wolf, killing eight and injuring 16 black people on Pretoria’s (then) Strijdom Square.

“I suffered extreme PTSD [post-traumatic stress disorder] after witnessing the massacre at 17 [years old] – seeing people dispersing and running away brought back those haunting images and feelings deep inside ... My biggest regret is I didn’t do anything to stop [Barend Strydom] hurting anyone. That’s why I went to help the woman on Saturday.”

He said it was ironic that despite having escaped assassination attempts in SA and despite still receiving hate mail because he was a member of Umkhonto we Sizwe and one of Nelson Mandela’s spies, he was injured at a peaceful rally in the US.

“I don’t agree with the looting and vandalisation, but people have had it. I’ve been involved in law enforcement my whole life – the law enforcement community needs to have an introspective look into who they hire. They need to ensure psychological tests are done to ensure the right person is chosen for the job.”

Steyn said he was in tremendous pain having lost half his testicle and would not be able to have children again. “It’s really sad too because we were hoping to have another child.

“Once I am better and I can walk again, I will protest again.”

Businessman and fellow struggle fighter Neil de Beer was so incensed by what had happened to his friend that he lashed out at the US government in a Facebook video as soon as he heard.

“The fact that he survived three to four years of the apartheid regime hunting me and him, where we fought the atrocities of people murdering people in SA because of the colour of their skin. For him to now, 26 years later, go to protest against exactly the same racism and then get shot while doing this is an indictment of the government of the US of America. It is an indictment on racism in the USA and everywhere where today racism is still alive.

“We cannot tolerate this kind of scenario on the prejudice of the pigmentation of the skin.”

His rage had not disappeared when he spoke to Times Select on Tuesday.

“I’m very upset. This is my brother. We stood together taking massive fire. Now to stand in the US and then to get shot ...

“[The event] brought back old memories. I was his unit leader. I recruited Brad into the ANC.”

He said now, at the age of 51, he had just begun to feel PTSD. He said the stress began after reading the book that detailed their journey together under the MK intelligence organisation. It has prompted him to write his own book, which he said would be a lot more critical about some of the projects they were on together.

“I led those projects. It has taken 30 years realise what we went through.

“We still get threats, and that’s why Brad is still in exile. People still have not forgiven us for being a spy for Mandela.

Don’t think the killing of black people in the US ...