Airport hangars and a sport stadium to be converted as EC braces ... 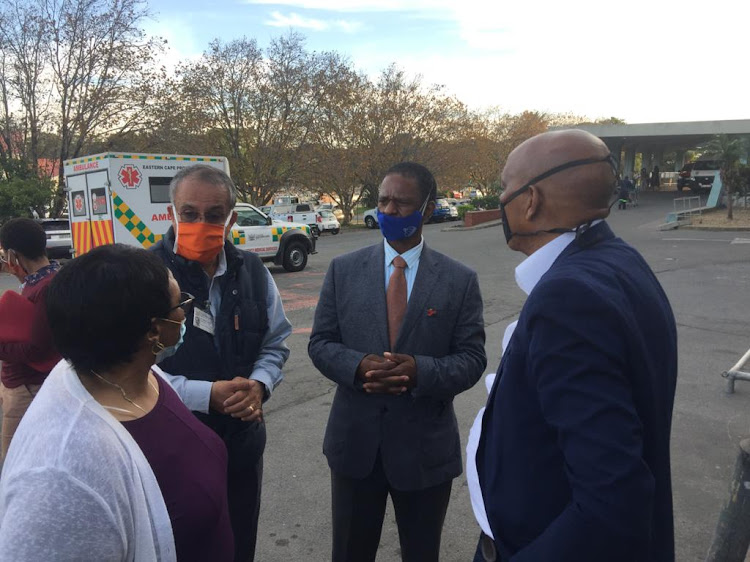 The Eastern Cape government plans to transform the old Mthatha Airport hangars, Buffalo City Stadium and a number of other state properties into isolation and quarantine sites.

This was revealed on Tuesday by provincial health head Dr Thobile Mbengashe during a two-day visit to the province by parliament’s health portfolio committee and the National Council of Provinces (NCOP) select committee on health.

The province is bracing itself for the Covid-19 pandemic’s peak, predicted for September. By Monday, it had recorded 4,111 cases, 82 deaths and 2,123 recoveries.

The Eastern Cape also plans to build 500-bed field hospitals in each of its eight districts.

Speaking after the visit on Tuesday, committee chairperson Dr Sibongiseni Dhlomo said they were concerned about the province’s use of private quarantine sites and the provision of protective equipment.

The committees spent Monday and Tuesday visiting hospitals in the OR Tambo and Buffalo City metros, including Nelson Mandela Academic Hospital in Mthatha and Cecilia Makiwane Hospital in Mdantsane.

“The availability of PPEs needs to improve. We cannot allow that health facilities have less than 75% of the needed PPEs. If it is allowed to reach 50% that will mean that 50% of our front-line people do not have protective equipment,” Dhlomo said.

On quarantine sites, Dhlomo said the use of private facilities was not viable and was problematic when medical equipment needed to be installed.

“These bed-and-breakfast facilities were not meant for hospitalisation,” Dhlomo said.

“We want the money used for bed-and-breakfasts to be used [to help front-line workers psychologically],” Dimaza said.

“Three weeks ago, as the committee, we proposed the use of state properties as quarantine sites and we are shocked that that hasn’t happened yet.”

Dimaza said the committee was also concerned about the lack of training of nurses and health officials in the use of protective equipment.

Referring to their visits on Monday, Dhlomo said the committee was disappointed that the CEO of Life St Mary’s Hospital in Mthatha was absent when the committee visited the hospital.

“Among the identified hospitals was Life St Mary’s, which has been in the public domain with regard to the challenges it has been experiencing related to high numbers of Covid-19 infections, affecting both its staff and patients,” said Dhlomo.

Life spokesperson Dr Julie MacLiam was not available for say.

Union representatives, before the meeting, were in a four- hour meeting with hospital management, portfolio committee members and head office officials.

They declined to reveal the details thereof.

Two weeks ago, Frere Hospital in East London was ordered to shut down because of concerns that measures for halting the spread of Covid-19, including access control, were inadequate. The Democratic Nursing Organisation of SA (Denosa) believed the situation was the “tip of the iceberg”.

Many citizens seem to believe they are immune, missing the cold parallel between two very different pandemics
Ideas
1 year ago

Dimaza called for a formation of Covid-19 committees at each hospital to deal with problems at the facilities. The committees would include all stakeholders, nurses, hospital management, unions, hospital boards and community members.

Mbengashe acknowledged that the province had had a problem with PPEs and a backlog with test results.

He said the province acknowledged that the use of bed-and-breakfasts was expensive and was working on building field hospitals in each district.

“Each district will have 500-bed field hospital, with 100 beds set aside for serious Covid cases or patients that need oxygen. Another 200 beds will be for isolation and quarantining,” Mbengashe said.

He could not say how much was spent on B&Bs.

To increase capacity, the Bhisho Hospital was also earmarked to be used exclusively for Covid-19 cases.

In Aliwal North, there were plans for a 100-bed hospital.

“We are working with the department of public works in identifying other state properties that can be used as field hospitals. If that fails we will use stadiums,” Mbengashe said.

The province needed 3,000 ICU beds on top of the isolation and quarantine beds, he said.

Public works provincial spokesperson Vuyokazi Mbanjwa said the Eastern Cape had 168 quarantine facilities with 4,909 beds — 142 were private and 26 were public.

A mitigation and containment plan by Eastern Cape premier Oscar Mabuyane, presented to President Cyril Ramaphosa last month, showed the province had less than half the 2,481 isolation beds it needed.

Only 47 ICU and high-care beds were available, compared with the envisaged 155, and just 1,315 of the planned 2,626 general hospital beds were ready.

State hospitals in two of the province’s infection hotspots, Buffalo City and Nelson Mandela Bay, were desperately short of ICU and high-care beds.

According to Mabuyane’s report, Nelson Mandela Bay had four beds and needed another 30, while Buffalo City had 14 and needed a further 18.

Chris Hani district had six beds. The remaining 23 were in OR Tambo district. The districts of Sarah Baartman, Amathole, Joe Gqabi and Alfred Nzo had no ICU beds.

Mabuyane said R50.5m had been set aside to improve 29 health facilities and R3m was available to create quarantine facilities in the hospitality sector.

“We are investing R251m in building three new health facilities, with a 100-bed capacity each, in Joe Gqabi, Buffalo City and OR Tambo, [and] refurbishing hospitals in Amathole, Alfred Nzo, OR Tambo and Joe Gqabi,” he said.

By Monday morning about 713,000 people had been tested in the province, home to an estimated six million people.

Turn for the better: corona tummy tactic may be a ...