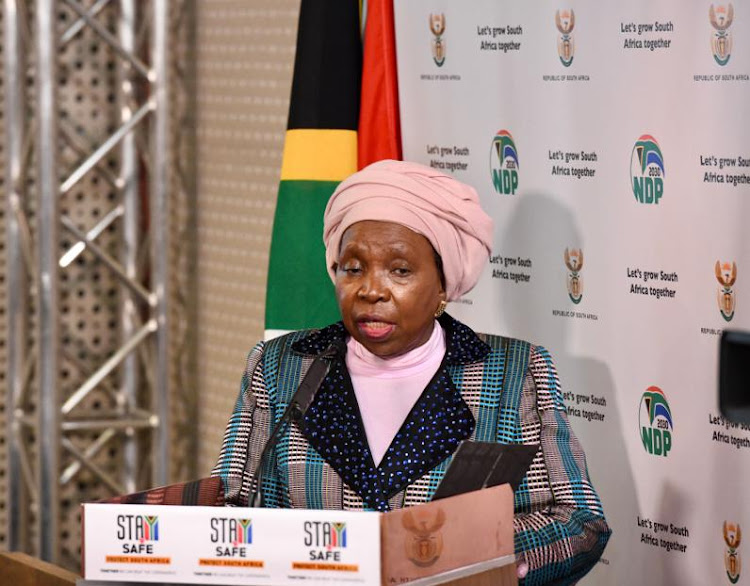 The short answer Nkosazana Dlamini-Zuma says 'nobody is forced to go to church'.
Image: GCIS

President Cyril Ramahosa’s ministers have doubled down on the controversial decision to open places of worship as they faced a barrage of questions from an unconvinced media contingent.

During a press conference on the latest regulations, ministers took a series of questions on the decision-making process that led to the announcement by Ramaphosa on Tuesday.

The new regulations make provision for gatherings at places of worship limited to 50 people under strict conditions, including hand washing, mask wearing and social distancing.

It’s understood that further directives on the specific conditions that will have to be met by places of worship are yet to be published.

Asked why the provision has been made given cluster outbreaks seen at churches around the world, the ministers had a range of responses.

Communications minister Jackson Mthembu said religious leaders had argued that people were already attending churches for funerals and so it made sense to permit church gatherings for other purposes.

The religious leaders had committed to Ramaphosa, during their meeting last week, that they would follow the “prescripts of the health department which are now the law”.

Mthembu told the media the virus had spread at a church gathering in Bloemfontein two months ago because there were no measures put in place, such as social distancing, the wearing of masks, and sanitising.

However, this was contradicted by police minister Bheki Cele at another press briefing, where he said clearly that such visits remained prohibited.

Churches are allowed a maximum of 50 congregants, given that all 50 should be able to keep 1.5m between them. This means smaller churches will be allowed to accommodate fewer people.

But then even more confusing statements came from the podium.

Cooperative governance minister Nkosazana Dlamini-Zuma added that weddings would be permitted, but only the ceremony, not the party that usually follows.

She also said that “nobody is forced to go to church. Government has just made the option available under strict and stringent conditions, which will be published.”

She added that the government was encouraging church goers over 60 to stay at home.

Asked why family visits were still not allowed if people could meet at church, Mthembu first said visits were permitted as long as they did not require interprovincial travel – before circling back and saying the visits must be necessitated by some or other need.

However, this was contradicted by police minister Bheki Cele at another press briefing, where he said clearly that such visits remained prohibited.

The press conference only proved one thing; the decision to allow religious gatherings was not well thought through.

If you open churches and mosques, why are restaurants, bars and movie theaters closed?

The answers vary, depending on who you talk to.

An impression has been created that Ramaphosa’s government bowed to pressure not because it regarded religious gatherings as essential during a pandemic, but because some political pressure may have been exerted during behind-the-scenes horse-trading.

To pour fuel on this speculation, the biggest church in the country, the Zion Christian Church, announced it would not be holding services.

It is largely church groups from the South African Council of Churches who are celebrating the move – the same churches with historic ties to the ruling ANC.

Faith in lockdown flies out the window when ...

OPINION | Cyril caves to churches, so cue the ...

Covid-19 has changed our grief and goodbyes, and ...

Are you feeling uneasy about the easing of ...