In a huge first, conservationists and game park officials make a last stand to protect rhinos from poachers 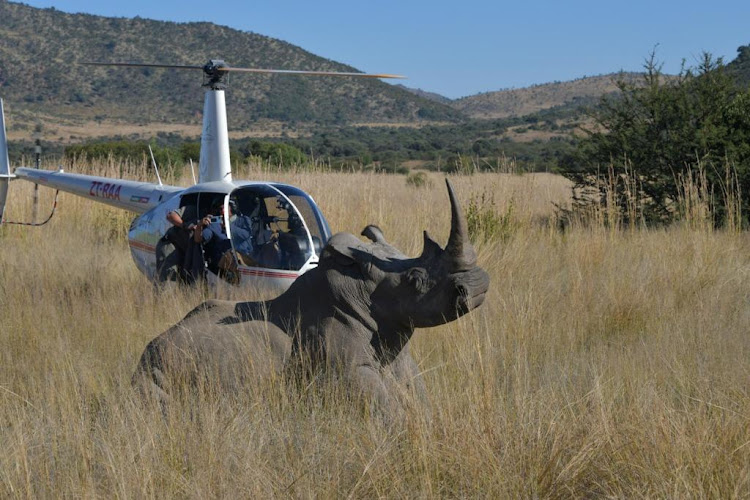 Get down The vet and pilot wait for the tranquilliser to take effect on a darted rhino.
Image: Supplied by Rhino 911

Hundreds of rhinos living in game reserves in North West have been quietly dehorned to protect them from poachers.

The mammoth and highly secret operation was carried out in Pilanesberg National Park over the past  nine days by North West Parks officials assisted by wildlife vets, volunteers and anti-poaching organisation Rhino 911.

“It has never been done before in a reserve as big as this in the time that we did it,” said Rhino 911 chief pilot Nico Jacobs. “It was hugely satisfying.”

With its roads and mountains, and surrounded by struggling communities, the park is difficult to protect from incursions by poachers.

It has never been done before in a reserve as big as this in the time that we did it.

But now that the country’s game reserves are closed for lockdown, NW Parks decided the time was right to carry out the project, which involved tracking the animals and darting them before removing their horns.

“Obviously there are no people around now,” said Jacobs.

Even though the lockdown has also made it difficult for poachers to operate, Jacobs and his team found the carcass of a rhino cow butchered just days before the project began.

Tracking the rhinos required two helicopters and teams of people on the ground.

“It was the most efficient operation I’ve ever seen,” said Lynne MacTavish, a game reserve owner who volunteered to help out on the project. “We could just concentrate on [finding] the rhinos.”

While dehorning often attracts criticism from animal rights activists, Jacobs says the procedure gives the animals a much greater chance of survival.

“This is my 16th year of doing this,” he said. “We’ve tried everything. We owe it to the animals to try every method to make a difference.”

The horn grows back by about 10cm a year.

For security reasons officials would not give the exact number of rhinos dehorned.

Dr Samuel Penny of Brighton University’s school of pharmacy and biomolecular science said his recent doctoral research had shown that dehorning rhinos did not affect their physiology or behaviour.

“There were no real changes in behaviour in how the rhinos were acting [after dehorning],” he said.

“We looked at changes over time. There was no indication that dehorned rhinos were more stressed than horned rhinos.”

Rhino horn is mostly made up of keratin, the protein found in human hair and nails. It is widely prized in traditional Chinese medicine as a cure for fever.

Owing to its high price in recent years it has also gained favour in countries like Vietnam as a “status cure” for various ailments.

With rhino horn currently trading on illegal markets for about $67,000/kg (about R1,2m), dehorning the animals may be their last chance of survival.

“There is literally no other option,” said Jacobs. “I’d rather see a rhino without a horn than a dead rhino.”