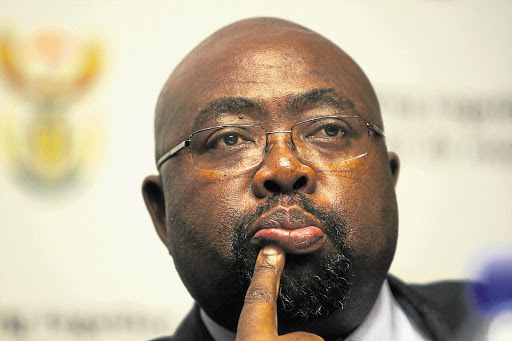 Work cut out Labour minister Thulas Nxesi will meet the National Economic Development and Labour Council to discuss the UIF, which has been plagued by tech glitches and whose sustainability in the Covid-19 pandemic is uncertain.
Image: Supplied

With just four days remaining in May, the department of labour will be in a race against time to process hundreds of thousands of claims for financial relief.

The Unemployment Insurance Fund – which manages the temporary employer/employee relief scheme (TERS) – said the system was still being “tested”, and a notice on the official website revealed that not a single application for the month of May had been processed.

Without the government lifeline, businesses run the risk of closure and the misstep could see workers going hungry as the Covid-19 pandemic lays waste to the economy.

“The system had to be reconfigured since some industries are going to open for business during level 4, and we anticipate that not all employees will remain on the lockdown. We’ll make an announcement once we’re ready to process the May claims,” he said.

Employers now only have one mode of communication with the UIF – e-mail.

Buthelezi added that the queries would be attended to, although it “may take a while”, and told BusinessLIVE the “challenges” would hopefully be resolved by the end of May.

We will encourage employers to consult broadly when it comes to major decisions with an impact on job security such as intentions to lay off workers.

Since it was established, the special Covid-19 relief scheme has paid out more than R11bn to 2 million people employed by more than 160,000 companies in distress.

The teething problems – and the fund’s ability to sustain relief payments – will be on the agenda on Thursday when labour minister Thulas Nxesi meets the National Economic Development and Labour Council (Nedlac).

Nxesi said he would ask social partners at Nedlac to work with the government to resolve current and anticipated challenges.

“We will encourage employers to consult broadly when it comes to major decisions with an impact on job security such as intentions to lay off workers,” BusinessLIVE quoted him as saying.

The fund has been beset by technical headaches and disputes over payouts as it strains under the mounting applications for relief.

Irked business owners say there is a glaring disconnect between money dispatched to their accounts and what reflects on the UIF system, setting workers and bosses at odds over money.

Jason Chapman, of Ballito-based construction firm Plumbing KZN, said he had written to the UIF commissioner two weeks ago after discovering a R173,104 shortfall between what the uFiling website said had been paid to the firm and what he had seen in his bank account.

“According to your website you have paid R256,736 into our company account for distribution to 59 employees,” he said.

Our staff are understandably concerned as they are directing their inquiries to both your office and your website and are being told that we have received their money but that we have not paid it out.

“Our staff are understandably concerned as they are directing their inquiries to both your office and your website and are being told that we have received their money but that we have not paid it out.

To date he has not received a response.

Chapman told Times Select his workers were becoming restless and disbelieved him when he said he could not yet pay them.

“It’s hard because they see we have been paid according to the website, but when I tell them I don’t have the money they think I’m talking rubbish,” he said.

Werner Greyling, of Valtron Gas and Installation, said he had applied for the relief for eight of his staff.

“Inexplicably, they only paid us out for three people, despite all of our applications submitted in the same fashion, and meanwhile we have been contributing to UIF for all of our employees for years,” he said.

Greyling added that queries on the discrepancy went unanswered, much like those sent by Chapman.

They only paid us out for three people, despite all of our applications submitted in the same fashion, and meanwhile we have been contributing to UIF for all of our employees for years.

National Employers Association of SA head Gerhard Papenfus said the UIF had fallen behind, and that the true cost would be felt by the workers.

“Our own research through the surveying of our members tells us that in April alone only 32% of employers who applied were paid out. May is not even open yet and we are barrelling toward a real disaster here,” he said.

“Let this be a lesson to the government that no amount of aid can replace a job, and considering the problems the UIF has experienced to date, the future does not bode well,” Papenfus added.

The spread of Covid-19 heralded a biting national lockdown, a desperate bid to enforce social distancing by confining people to their homes.

Seen alongside a full deck of ratings downgrades, the National Treasury said as many as seven million jobs could be lost as unemployment peaks as high as 50%.

Economist Dawie Roodt said the relief scheme was pivotal for many, no more so than the tourism industry.

“You have an entire sector where revenue has been reduced to zero. When the UIF stumbles, tremendous damage is done,” he said.