Nearly a million tests have been distributed across the continent 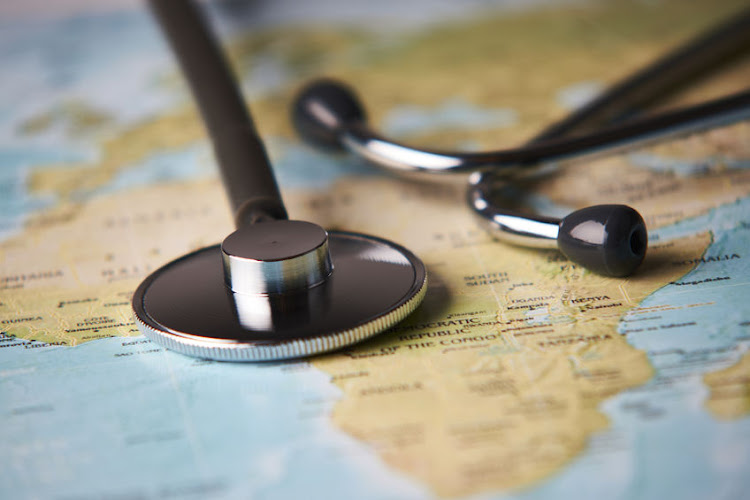 STEADY About 3,000 new Covid-19 infections are being reported a day in Africa.
Image: 123RF/geckophotos

The number of Covid-19 infections in Africa is not rocketing up. Instead the number of new infections has been roughly the same for the past fortnight, with SA driving the increases with its intensive testing.

“We have not seen significant changes there,” said Dr John Nkengasong, head of the Africa Centres for Disease Control and Prevention (Africa CDC). He reported about 3,000 new infections were being detected daily.

Lesotho reported Covid-19 for the first time this week, and Madagascar and South Sudan reported their first deaths.

There is no way the world will be saved from Covid-19 if the continent of Africa becomes the next epicentre and the virus is circulating among 1.3 billion people.

SA, Egypt, Algeria, Morocco and Nigeria account for 56% of the cases on the continent.

“SA is testing more. If you test more, you find more,” said Nkengasong.

“That is the winning formula: to test, to trace and isolate, and repeat it all over again.”

Of the five geographical regions, Southern Africa had the most reported increases over the past week, with about 6,400 new cases.

Africa CDC’s Partnership to Accelerate Covid-19 Testing (Pact), launched in April, is promoting intensive testing — with a target of 10 million tests in the next four months.

The goal is “smart testing targeted at populations likely to be infected” rather than massive testing.

To date, nearly a million tests have been distributed across the continent.

“We are intensifying our effort, and want to go from 10 million to 50 million tests,” said Nkengasong. “The key here is partnership.

“There is no way the world will be saved from Covid-19 if the continent of Africa becomes the next epicentre and [the virus] is circulating among 1.3 billion people,” he said. 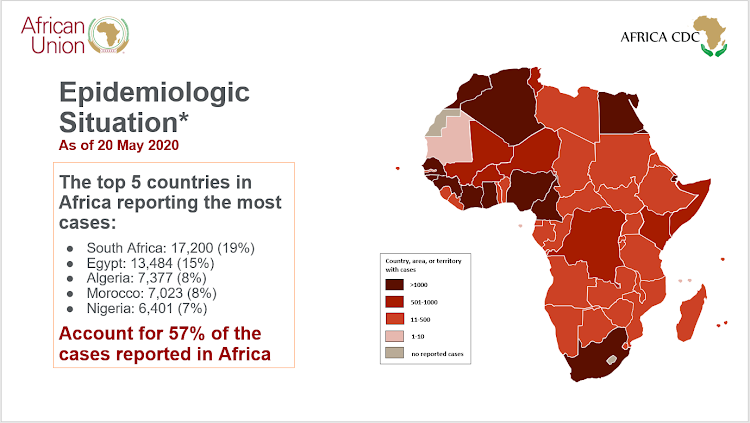 The Africa CDC began to scale up diagnostic capacity in the first week of February, before a single case had been reported on the continent, and expanded training in key areas including environmental cleaning and surveillance.

Their team started with Senegal and followed up with SA. “We selected countries with a lot of flights and direct connections to China.

“On February 14, the first case was reported in Egypt and subsequently in Nigeria, and thereafter was a massive importation from Europe, not China.

“We were taught a lesson: the world is more connected than we thought.”

Many countries in Africa locked down very early and delayed the epidemic, he said.

The worst-case scenario for Africa initially estimated more than three million infections and about 300,000 deaths from Covid-19.

“This does not mean Africa has been spared from it.”

The Africa CDC has issued guidelines about easing lockdown and, like the World Health Organisation, recommended a step-by-step approach while scaling up testing, tracking and surveillance.

“There will be an increase in the number of cases,” said Nkengasong. The main thing is: ‘Are your health facilities ready?’”

He warned against the doubts that “have crept in” that Covid-19 does not exist or is not a killer.

“Covid-19 is dangerous, and the virus is treacherous. We should not have a false sense of complacency.”

Proportion of Covid-19 cases per region

Africans mourn their right to time-honoured ...

Is it only me who’s a tad panicked about SA’s latest virus projections?