‘A matter of time before the rest of SA catches up with Western ...

Reading Time: 4 Minutes
Article Number: 1 / 19
Tanya Farber
Journalist
Harbinger of gloom Prof Salim Abdool Karim says the rest of the country can expect Covid-19 to affect it in the same way it has spread in the Western Cape.
Image: Sandile Ndlovu

The Western Cape, home to almost two-thirds of confirmed Covid-19 cases, is providing the rest of the country with a taste of things to come.

That was the message on Wednesday from provincial head of health Dr Keith Cloete and Prof Salim Abdool Karim, chair of the government’s ministerial advisory committee on the coronavirus pandemic.

Cloete told a media conference that local transmission of the virus, which began when infected South Africans who had travelled abroad arrived home, started earlier in the Western Cape than in the rest of the country.

“We are not seeing anything different to what the rest of the country can expect,” Cloete said, as confirmed infections in the province went up by 514 to 11,072 and fatalities reached 211, up 28 since Tuesday.

Earlier, in a webinar organised by the South African Clinical Trial Research Association, Abdool Karim said it was probably a matter of time before the rest of the country saw a similar pattern.

We are not seeing anything different to what the rest of the country can expect.

He said the Western Cape was providing an “early indication” of how the pandemic played out and this included “a much higher number of cases in the hospitals”.

“When we look at the way an epidemic occurs, we have an eight-stage strategy. We have finished the first four — preparation, prevention, lockdown and active case-finding, with field workers looking for patients.

“We are now in stage five of going to hotspots, but that started in the Western Cape two weeks ago,” said Abdool Karim. 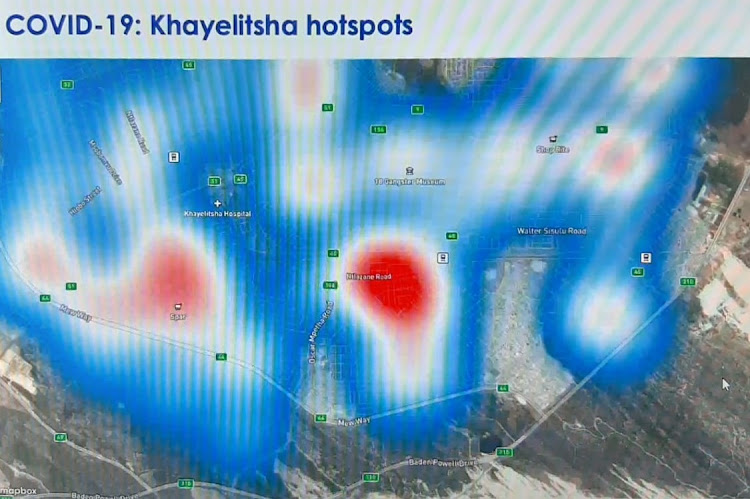 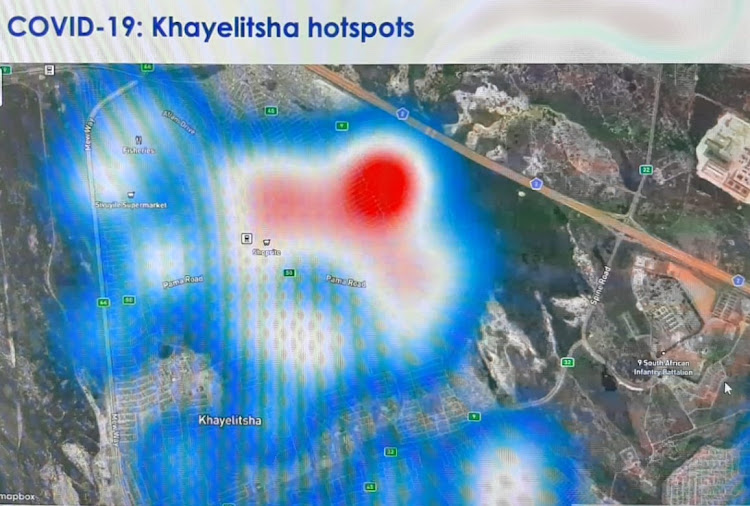 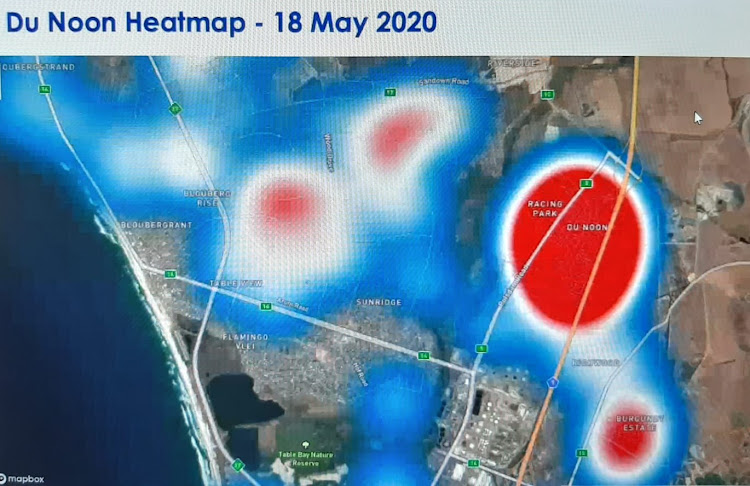 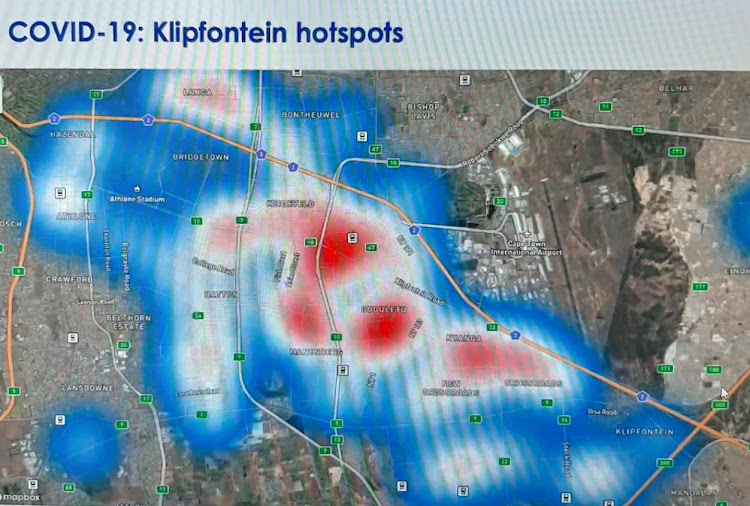 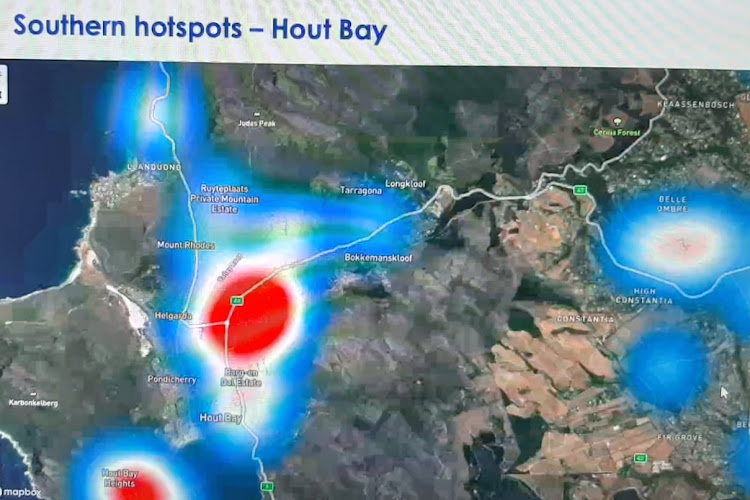 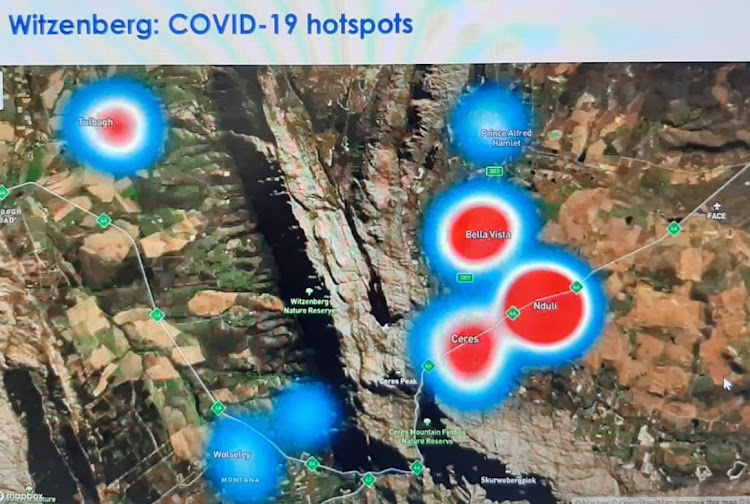 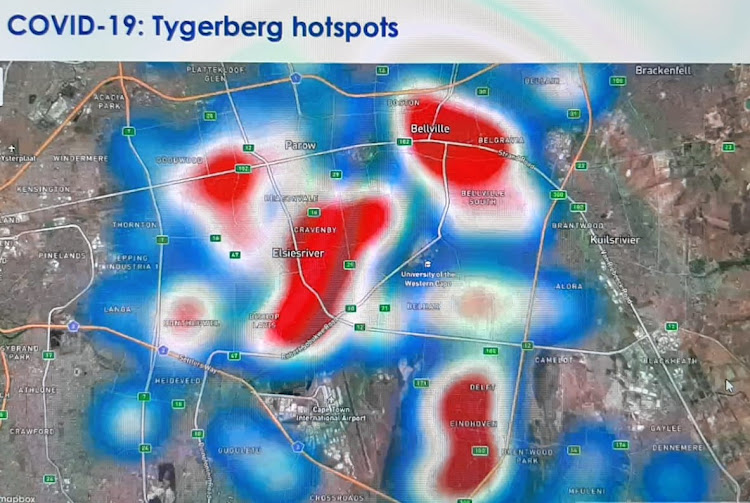 For the first time, the Western Cape revealed detailed locations of hotspots. Abdool Karim named Khayelitsha Spar, Goal Supermarket in Delft and the GlaxoSmithKline factory in Epping as infection clusters which had led to 223 positive results.

Dr Melvin Moodley, director of strategy in the provincial health department, said statistics on infections would soon be available at town and suburb level, rather than only by health district and subdistrict.

While these would only be between 70% and 80% complete and accurate, Moodley said they were important for transparency and resource-planning.

After the death of a fifth Western Cape health worker from Covid-19, Cloete said a shift of emphasis would bump health staff to the top of the queue for Covid-19 tests, alongside the third of patients regarded as most vulnerable.

identifying hotspots Western Cape premier Alan Winde is in quarantine after coming into contact with eNCA cameraman Lungile Tom, who died of Covid-19 on May 13.
Image: Mohau Mofokeng

Premier Alan Winde said testing and lab capacity were “under severe strain”. Cloete said most results were coming back within three days, but others were taking a week or longer, which meant a strategic shift was vital.

“Our health workers are our most useful resource, so exposed health workers’ results must come back within 24 hours, because it affects the health workforce,” said Winde.

“The second priority is the people who are likely to present themselves to emergency units in hospitals — people with comorbidities. Testing them as they present at a health facility is crucial. They then become ‘persons under investigation’.”

Winde said the “hotspot” strategy being adopted by the province was presented to health minister Zweli Mkhize  two Saturdays ago, and now that the country was facing the prospect of 40,000 deaths this year, the approach of the Western Cape could inform the response in other provinces.

Emphasising a zero-tolerance approach for infractions of social-distancing norms, Cloete said the “severe stress” on testing and laboratory capacity meant a large number of undetected Covid-19 cases would continue to grow.

However, two-thirds of people who contracted Covid-19, mainly under-55s with no comorbidities, would recover within two weeks, meaning the province could safely adopt a “risk-stratified case-management approach”.

This would prioritise patients over the age of 55 and those with underlying conditions, such as hypertension, diabetes, cardiovascular disease, TB and HIV.

Abdool Karim said SA must avoid a situation similar to those in New York and Italy, in which “the virus is left unchecked and spreads so rapidly that it begins to overwhelm the health-care system”.

SA was in its 52nd day since confirmation of the 100th Covid-19 case, Abdool Karim said, adding that data before the 100th case was too limited to be significant.

“Our entire population is at risk, rich, poor, men, women ... and one in five of those who have symptoms may need hospital care,” he said.

“It was slowing down and since the easing of the lockdown, we have maintained a pretty reasonable rate of about 12 days for active cases to double.”

The Western Cape provided new information on the extra hospital beds that would be available for Covid-19 patients.

From May 30, Medecins Sans Frontieres (Doctors Without Borders) will operate a 68-bed hospital in the Thusong Sports Centre in Khayelitsha. On June 8, an 850-bed field hospital at Cape Town International Convention Centre will start operating. On July 7, a 330-bed hospital will become operational in a warehouse at Brackengate Business Park. Extra beds are also being added at Sonstraal Hospital in Paarl.

SA experts probe victims’ lungs to work out why ...

Sorry state of emergencies: a cry for non-Covid ...