Whatever you do, do not pay a lockdown admission of guilt fine: ...

Whatever you do, do not pay a lockdown admission of guilt fine: lawyers

If you pay you will have a criminal record, when in many cases your legal rights have in fact been violated 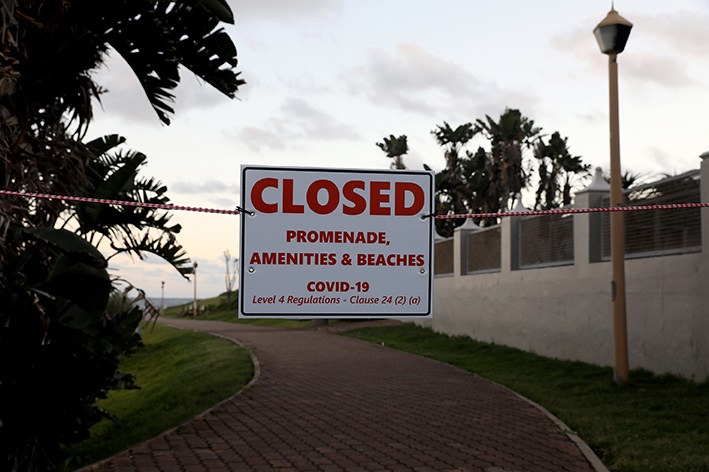 And don't you forget it! A sign warning the public that the Ballito beach promenade is closed during lockdown.
Image: Sandile Ndlovu

“You could have sworn you’d walked into a drug ring or murder crime scene.”

This is how a 41-year-old KwaZulu-Natal father described the treatment he, his wife and nine others, including a couple in their 80s and a pregnant woman, received after being arrested for being on Shaka’s Rock beach, on the Dolphin Coast on May 10.

The elderly couple, an 88-year-old man and his 81-year-old wife, who have walked the same stretch of beach for 20 years, were too traumatised to speak after their arrest and almost seven-hour detention in police holding cells until they were able to pay a R1,000 admission of guilt fine.

Speaking to the Times Select on condition of anonymity, the father described the frantic cries for backup from a traffic officer as his family made its way off the beach after a stroll on Mother’s Day morning.

But little did the father of two know that the orders for reinforcement would lead to him and his wife being arrested for contravening the Disaster Management Act for being in place prohibited in lockdown.

News of their arrests were cast into the spotlight last week after a video surfaced on social media showing two officers in a tug-of-war with a four-year-old child and his father, one of the transgressors.

Footage of the incident struck a chord with thousands of South Africans, who have criticised the police, army and other enforcement officers for behaving as if SA is a “socialist, fascist police state”.

The treatment of Soweto atchar vendor Thandi Thabethe, who had handcuffs slapped around her wrists for trading without a permit, drew similar outrage last month.

And in Cape Town, Liam Bulgen, 38, found himself in the back of a police van last week after he and his fiancée were arrested while chasing after their two-year-old toddler, who had run on to a beach.

On Friday, the Pretoria high court declared that South Africans are entitled to a number of rights which can’t be suspended, even during the state of disaster.

The court order came after an application by the family of Collins Khosa, a 41-year-old man who died after he was allegedly beaten by soldiers and metro police outside his home in Alexandra, Gauteng, on April 10.

While the narrative of these incidents and the treatment of countless others are questionable, one factor remains for each of those arrested — the risk of a criminal record.

Magistrates, attorneys and advocates say many, if not most, apparently trivial charges emanating from lockdown arrests will not stick in court.

They warn that the police must prepare for a spike in civil claims for damages for unlawful arrests, which already costs the service billions of rand every year. (In 2014/15, it had pending claims amounting to R26bn and in 2018/19 in the Eastern Cape alone, it paid out more than R45m).

They say in many instances the police are not obeying the law and seem to be acting in the belief that the country is in a state of emergency, where civil liberties can be reduced, rather than a state of disaster.

Retired judge Thumba Pillay said the “chest-thumping, skop skiet en donder attitude of some ministers” was worrying and did little to rein in the over-zealousness of law-enforcement agents in lockdown.

“Arresting and locking up citizens for minor infringements when an admonition or chastisement ... would have met the situation can be counterproductive.

“Detaining them in overcrowded and unsanitary cells pending appearance in court or until such time as the requisite fine or bail is paid is counterproductive and can only exacerbate the spread of the virus.

“Surely some balance needs to be exercised by senior officers over their juniors in the security cluster, depending on the circumstances and seriousness of the infringement.

“It is well to bear in mind that there is a side of policing which, for me, includes educating and admonishment. It invariably engenders respect,” said Pillay.​

Paying admission of guilt fines is paying away all your constitutional rights.

Adv Paul Jorgensen said the conduct of police at roadblocks was “a complete infringement of constitutional rights”.

“When the driver is asked a question, he does not know whether he is being interviewed as a suspect or a witness.

“For example, a motorist might say they are going to the shops. Then the police will say: ‘But there is one closer to your home.’

“By answering the question he has incriminated himself. So before the police officers ask any questions the motorist  should be read his rights. This is not being done.”

Jorgensen said searches of vehicles would also be deemed unlawful, unless the motorist gave consent and, for a charge to stick, the police would have to explain why they had “reasonable suspicion” that an offence was being committed.

“People believe they are governed by the [lockdown] regulations. But the constitution and the applicable laws still apply,” he said.

“Paying admission of guilt fines is paying away all your constitutional rights. I understand that people just want to get it over and done with quickly, but it is not like paying, for example, a parking ticket. If they take your fingerprints, you will get a criminal record.”

The police minister tackles this and other thorny lockdown issues, including ‘heavy-handed’ cops
News
2 years ago

He said it was possible, in theory, to attempt to overturn admissions of guilt, but you would have to prove it was done under duress.

“I believe hundreds of civil claims are in the offing and in many cases prosecutors will decline to prosecute when people start appearing in courts.”

A senior magistrate, who cannot be named, agreed.

He said the Constitutional Court had spelt out how discretion should be exercised before arrests were made and that “a prudent policeman should always explore less invasive means”.

“Courts, when deciding on these issues, would always consider whether a written notice to appear in court would have sufficed, whether the suspect was a flight risk.

“In the Muizenberg and Ballito instances, I believe the minister would have a mountain to climb to suggest that the police even came close to a proper exercise of their discretion.”

He said charges “open to serious challenge” included shopkeepers selling cooked food before the regulations were amended, going to a pharmacy without a prescription, going to shops not closest to home, exercising on common property, drivers not wearing masks and passengers not sitting on the back seat.

Paying admission of guilt fines is dangerous. You can get a criminal record. With the stroke of pen, law-abiding citizens are being turned into criminals.

Attorney Jacques Botha said he had represented the manager of a well-known stationery store who was charged with breaking lockdown rules for selling school stationery, even though she had the necessary permits.

“When my client appeared in court, the prosecution declined to put the case on the roll.”

He said matters were being adjourned until June or July, “so we will only see the logic of some of these cases when we see the dockets”.

“Paying admission of guilt fines is dangerous. You can get a criminal record. With the stroke of pen, law-abiding citizens are being turned into criminals.”

A lot of us are professionals and some hold directorship positions and this could become problematic. I still don’t know if we have records or not.

In some cases the police do not explain to an accused that the payment of an admission of guilt fine can result in a criminal record.

This was the case for the Shaka’s Rock father, who said he and his wife had asked the officers if they would get a criminal record, but did not receive a clear answer.

He said he was not certain if he had paid police station bail or if he had paid an admission of guilt fine, but that he had been given a date to appear in court.

“A lot of us are professionals and some hold directorship positions, and this could become problematic. I still don’t know if we have records or not.”

He said while all of those arrested on the day paid a R1,000 fine and had their fingerprints taken, it was not something they would take lightly when their day in court arrived in August.

Attorney Vumani Mthembu said police station bail was a sum of money paid by an alleged offender for their release from detention.

“Not everyone can be granted police bail. The offence committed has to be something light in respect of the law.”

Mthembu said an alleged offender’s fingerprints would be taken by police and entered into their database, but this was not necessarily for a criminal record.

“When you are granted police bail your fingerprints will be entered into their database to show that you have a pending case against you. You are still expected to appear in court to defend your case, which, depending on the outcome, will result in a criminal record or not.”

Mthembu said an admission of guilt fine was different in that an alleged offender would not be given a date to appear in court.

“When you pay an admission of guilt, you are pleading guilty for the offence committed. Your fingerprints will be taken and entered into the police database, and you will automatically have a criminal record.”

Fears of what will happen if new hospital has to ...

Panicking Dutch dad fails in bid to get son out ...

Community hasn’t got a dime from tourist hotspot. ...

Lockdown rules are based on science, insists Cyril as court cases loom

Can we save the school year? Only if we all think very clever, say experts