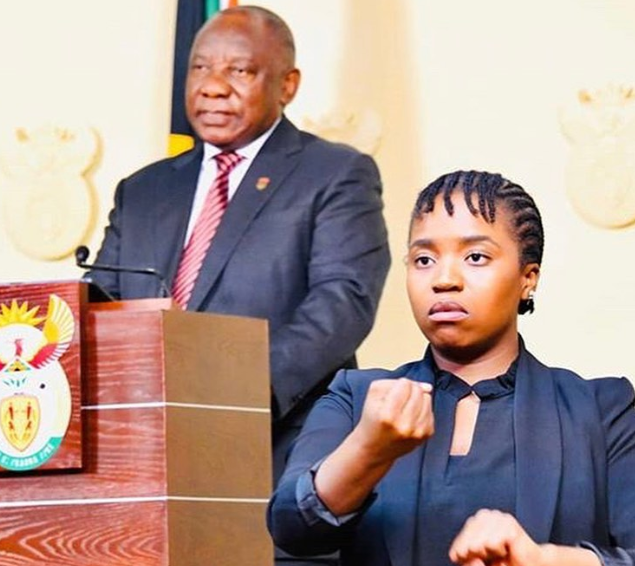 She is one of several sign language interpreters who have graced SA’s screens beside Ramaphosa as he delivers news of national importance during the coronavirus lockdown.

Gebashe, 34, and her colleagues have become internet sensations as South Africans are taken by their hand gestures and facial expressions while they ensure that the government’s message also reaches thousands of deaf people across the country.

Times Select spoke to Gebashe on Wednesday, hours before she delivered the latest lockdown regulations on behalf of the president to the deaf.

“I don’t know how many times I have been the president, myself,” the bubbly interpreter chuckled.

I don’t know how many times I have been the president, myself.

She loves her job, which is evident as she speaks. “I have the most interesting job under the sun. I think being an interpreter, in general, is a privilege because you get an opportunity to bridge cultures, language. It is a phenomenal and rewarding experience for any interpreter, be they a South African sign language interpreter ... or any other language,” she said.

But it is not at all easy.

“It is very difficult but it is doable. It is important to study for the profession because being bilingual does not make you an interpreter. It is an assumption that most people make that if, for example, you speak Zulu and Tswana, you can interpret from one to the other, and it is far from the truth,” she said.

“Interpreting is a different skill altogether. You need to be trained to receive information, analyse it and reproduce the information in a totally different langua  ge.

“There’s no Zulu or Xhosa sign language. Sign language is a language that stands on its own that also has its own culture. It is an entire language.

The term coronavirus was one that many had never heard of before the outbreak in China late in 2019. Andiswa said this was another word she and other sign language interpreters needed to add to their vocabulary.

“Like with spoken language, there are new words that are formed and developed all the time. It is the same with sign language – there are new signs being developed, new terminology, new vocabulary during this time.

“Before the lockdown, when corona was still in just Italy and America, there was a deaf person who put it on the internet, saying there is this thing called corona. He spelled it out and said this is how it was signed in China. Everyone then followed suit. If you look, whenever they speak about the coronavirus internationally, they are all using the same sign,” she said.

She said it takes a lot of research and reading to be a good sign language interpreter, “because how else can one accurately interpret on a subject one knows little about?”

“Your level of the comprehension of the message is vital. You cannot interpret what you do not know or what you do not understand. If I don’t know anything about GDP, for example, and it comes up, I would be in trouble,” she said.

What also makes her job a little bit tougher is the need to sign simultaneously with the president or minister as they deliver their message, adding that there is no opportunity to pause in between and take notes.

“We are literally two or three seconds behind [the person delivering the message],” she said.

Sign language interpreters usually work in teams so that one can help the other if they trip up on a certain term or figure.

Andiswa said that while just one interpreter could be seen on screen, there was usually another sitting either in front of her or standing next to the camera, supporting her with information.

“Should I drop a word or a number, or speak of new terminology, there has to be support ... You may find yourself dropping a number because you are two seconds behind, but your support interpreter is on par with the speech and may also have a copy in front of them. They can therefore feed you a number that you drop. It doesn’t happen often, but it’s just a safety net to ensure that you are correct and accurate in your message. You have millions of people relying on you to get the message, so the pressure is on,” she said.

When Ramaphosa announced the lockdown extension several weeks ago, many South Africans were shocked. Others were disappointed, while to some it came as no surprise at all. So for those interpreting Ramaphosa’s speeches, which one is it – shock or surprise, or are they privy to the information before the rest of the country hears it?

“In an ideal situation, you should get the material prior and then you read and prepare for it. You consult within that hour that you have to prepare, but obviously everything that we interpret is confidential and we are not to share it with anyone,” said Andiswa.

As images and video clips of Andiswa and her colleagues interpreting beside Ramaphosa have gone viral on social media, she said they feel appreciated for the job they do.

“We are used to being in the shadows. I am that person who walks in the room, I stand in my corner, do my thing and go home. I have been an interpreter for 10 years, but now the love from random people is amazing,” she said.

For her, the passion and enthusiasm for sign language is deeply rooted.

“My father is deaf, so sign language is my home language. I have been signing all my life,” she said.

My father is deaf, so sign language is my home language. I have been signing all my life.

She said deaf people in SA are usually left behind.

“There are people who are privileged enough to go and Google the president’s speech, but then you have people like my father, who are in the villages and townships, who don’t have data or smartphones, so they solely rely on the sign language interpretation that is there,” she said.

“It’s unfortunate that we don’t have [sign language] 24/7 and it’s not on all the news channels.

“One of the things I appreciate is that sign language is being recognised, as it has always been an afterthought. When we do conferences for hearing people, like even for gender-based violence, you don’t even see an interpreter. We forget about the women who need to hear this message because they suffer the most and can’t even go report this at the police stations because they can’t communicate.”

She hopes things will change for the deaf community.

“I am hoping that this pushes for South African sign language to become an official language, because the president spoke about it in his State of the Nation address this year. One hopes this actually materialises.

There are certain things that Andiswa feels SA still does wrong when it comes to the deaf community. The first is simply addressing them correctly.

The term “hearing impaired” should never be used, she said, unless it is for medical purposes.

“Hearing impairment puts a stigma that they need to be fixed. It is something that is broken and needs to be fixed,” she said.

Capitalising the D when referring to the Deaf was also important, she added.

“Your D must always be in caps because that Deaf represents a culture being embraced. If you are going to write IsiZulu, the z would never be a small letter, so why is it for the Deaf?”

Have stroller, will travel. At 90, she’s out daily