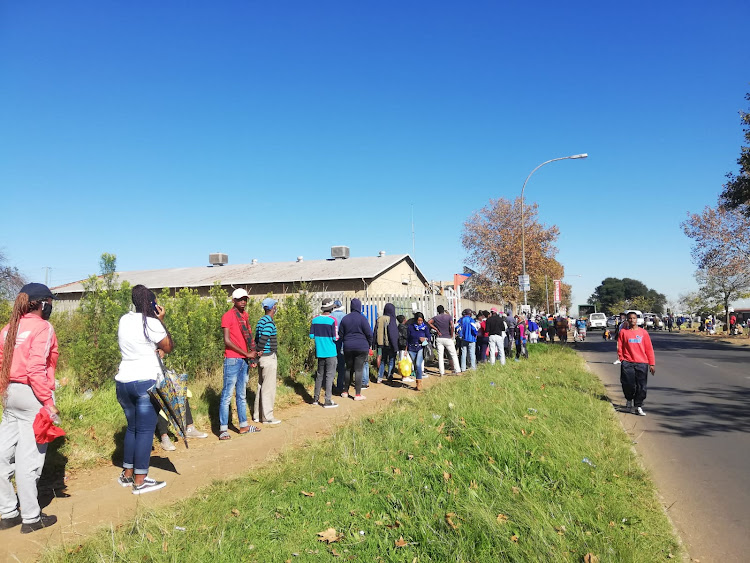 Wait of the world on their shoulders Social grant beneficiaries, such as the dozens seen here queueing in Soweto, have had to wait longer than usual to plan around their monthly budget.
Image: Nonkululeko Njilo/TimesLIVE

As the government began the payment of “topped-up” child grants on Wednesday, dozens of Soweto recipients braved long, winding queues to collect grants and buy groceries after some had to survive on food parcels.

The SA Social Security Agency (Sassa) was expected to pay 7 million beneficiaries who would receive an extra R300 in May (amounting in total to R740), and an extra R500 a month from June to October, as per the new government multibillion-rand Covid-19 fund.

The grant, which is normally paid on the first of every month, meant beneficiaries needed to wait longer than usual to plan around their monthly budget.

The mother of two said she was grateful to have received her money after the long wait and uncertainties following technical glitches for other Sassa beneficiaries at various pay points on Monday.

Vuso said she joined the queue as early as 6am.

“I was worried thinking what I would do if it didn’t come out, because we have run out of almost everything,” she said.

The past five weeks had been difficult for her because she had been retrenched two months before the start of the lockdown.

“I was in the process of looking for a job, then the lockdown came. My children and I had nothing.

“If it was not for the food parcels, I would have been forced to go back home,” she said.

While Mavuso and scores of others had the option of making withdrawals at any ATM, they said they could not sacrifice their cash for bank charges.

Long snaking ques have been the order of the day in various SASSA paypoints at Soweto. Child grant recipients at Pimville, expressed frustration at the elderly" jumping" the ques - after failing to collect cash on Monday and Tuesday. @TimesLIVE pic.twitter.com/dhztEjD77u

Zandile Mnyamana expressed relief at the topped-up grant. “It’s going to help me a lot.”

Unlike others, Mnyamana gets financial help from her partner. With the grant increased, she said she looked at the possibility of saving at least R200 towards her child’s education.

“The grant has never been enough but we have been surviving. I want to try and save because it’s not like I’m used to getting this much.”

Beneficiaries used the opportunity to buy groceries in bulk, which resulted in a shortage of trolleys for other customers.

Canned food, maize meal, eggs, chicken portions and nappies were among the most common items bought.

Another beneficiary, identified only as Itumeleng, left an ATM disappointed. She said she had received her payout in full but was not happy because “it’s going to my landlord”.

Her landlord had threatened her, saying she needed to pay R700 rent as usual or face eviction.

This meant she would have almost nothing left. She was uncertain how she and her child would survive for the rest of the month without asking for help from relatives or heading to a loan shark.

At the Attlyn Mall in Atteridgeville, near Pretoria, grant recipients also joined long queues managed by community police forum members, who were checking for masks and social distancing.

At a Shoprite supermarket, social grant beneficiaries who made use of the “cash-back” services to access their grants, were given chairs and crates to sit on. 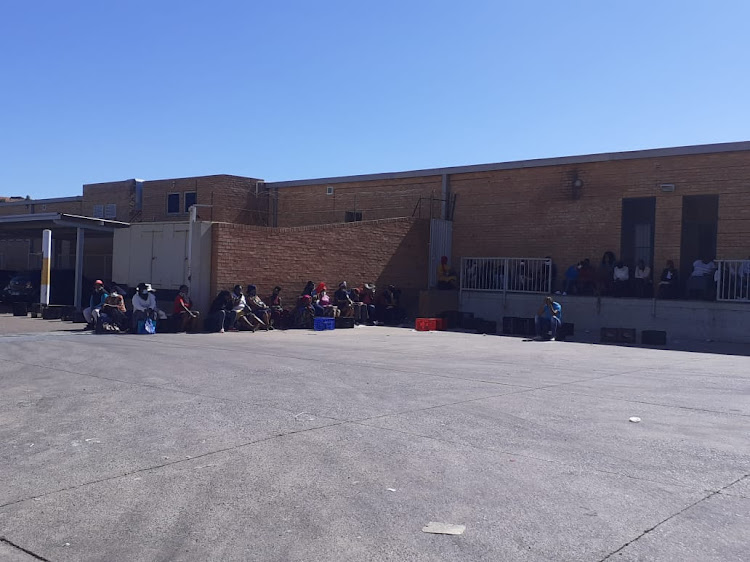 Crate expectations Social grant beneficiaries at Shoprite in Atteridgville were given chairs and crates to sit on.
Image: Shonisani Tshikalange/TimesLIVE

Julia Livhebe, a mother of three, said she preferred to withdraw money at an ATM because she wanted to buy her groceries in bulk.

“My family is big, so I need to buy in bulk, that is why I prefer to withdraw the money,” she said.

She also needed cash to pay for services such as burial societies.

A 25-year-old woman also said she preferred hard cash because it helped with planning for the month and because she used some of it to contribute to a stokvel.

“The payment dates have inconvenienced us as we were used to the old pay dates; now we had to try and shift our responsibilities,” she said.

There were long queues elsewhere in the country, too.

This is the #SASSA payout queues at Tonga Mall in Mpumalanga.

EDITORIAL | There’s too much at stake for Sassa ...

‘I wish my family would get sick and hospitalised ...

Mind the gap: why isn’t social distancing among ...

Sassa-linked firm was wrong to fire staff who ...

No fittings? No returns? These are your lockdown clothes-buying rights

No back to school until basics sorted, says survey-wielding Sadtu