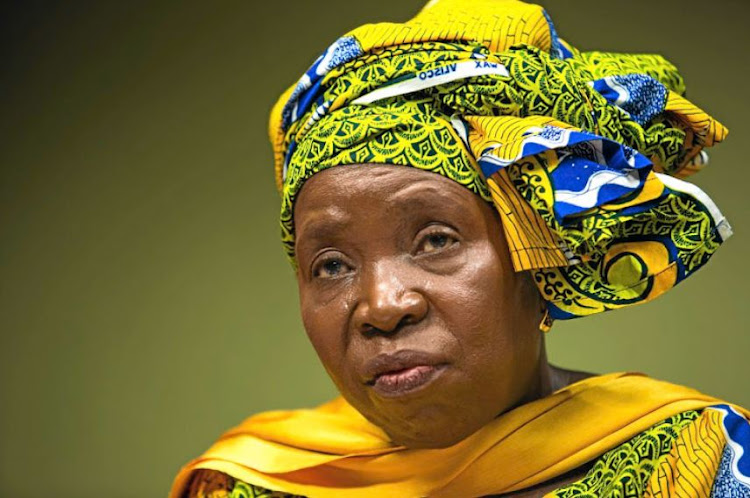 go Make a zol, woman Nkosazana Dlamini-Zuma is at loggerheads with the tobacco industry and nearly five million smokers, who have signed a petition to overturn the ban.
Image: Simphiwe Nkwali

SA’s tobacco industry has thrown down the gauntlet to government, demanding the ban on cigarettes and tobacco products be lifted.

The council directs the state’s response in fighting the coronavirus pandemic. The government has been given until Wednesday to indicate whether it will oppose Fita’s legal challenge.

At the weekend, Sunday Times quoted minister in the presidency Jackson Mthembu as saying the tobacco issue was not one that could be resolved through mediation because there was nothing to negotiate.

“We are not going to change our approach. There is no possibility of a midway agreement that accommodates them and us. We believe that it is the right thing to do. I don’t see any of us agreeing on the measures the other party has taken. We will make our case in court. We believe we have very good reasons.”

On Monday, Presidency spokesperson Khuselo Diko said the court papers were being studied. “We will respond to them in due course."

Since the lockdown began on March 27, cigarette sales have been illegal, with manufacturers and exporters unable to operate.

Sars, according to Fita, earns an estimated R14bn annually from excise duties on cigarettes and tobacco products.

Fita, backed by nearly 500,000 smokers, wants the sale of cigarettes and tobacco products declared lawful and manufacturing and exports allowed, under strict conditions. 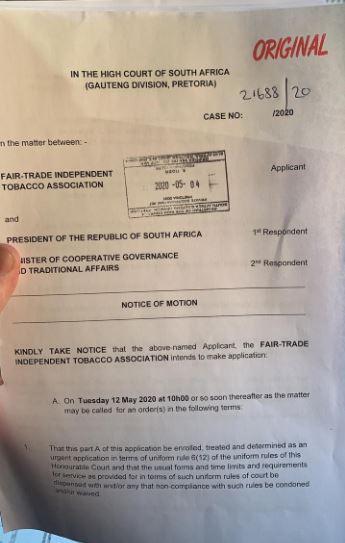 NOT FAIR The Fita court documents challenging government about its continued ban on the sale of cigarettes and tobacco products.
Image: Fita

Sparking the ire of Fita and smokers was the April 29 announcement by co-operative governance and traditional affairs minister Nkosazana Dlamini-Zuma that cigarette and tobacco sales would continue to be banned under level 4 lockdown.

She made the announcement after President Cyril Ramaphosa, on April 23, told South Africans cigarettes would be unbanned under level 4.

The widespread public and tobacco industry condemnation saw Ramaphosa enter the fray on Monday in his weekly newsletter, in which he said the continued ban had been a “collective decision”.

“After careful consideration and discussion, the NCC reconsidered its position on tobacco. As a result, the regulations ratified by cabinet and announced by Minister Nkosazana Dlamini-Zuma on April 29 extended the prohibition.

“This was a collective decision and the public statements by both myself and the minister were done on behalf of, and mandated by, the collective I lead.” 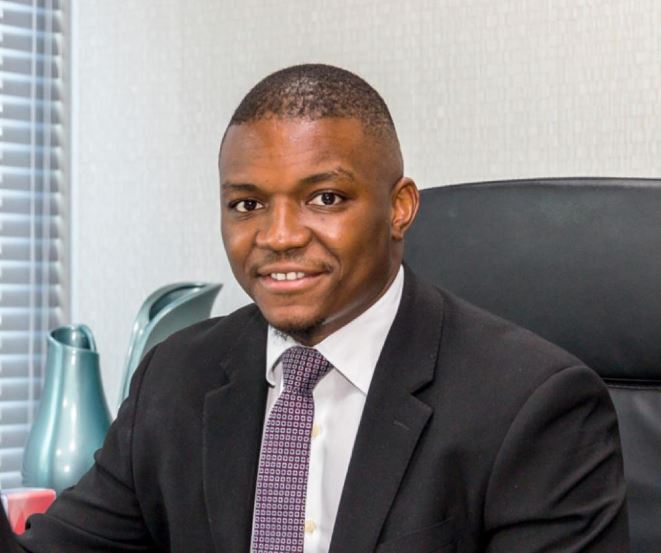 In his affidavit, Mnguni said the association had brought the application because it believed the “freedoms of more than 11 million smokers” had been affected, along with their mental health.

“The sudden and clearly ill-considered ban ... seriously affects and impacts upon the health and welfare (both physical and psychological) of millions of citizens (with well-recognised dependencies), without regard for the far-reaching traumatic effects flowing [from] the withholding of these products.”

He argued that the prohibition had had an enormous negative commercial impact on manufacturers and retailers, and their right to pursue their business, with a negative fallout regarding “significant losses of tax revenue”.

Mnguni described the regulations as “self evidently irrational”.

“The regulation is exacerbating the already particularly trying circumstances of millions of citizens who are already emotionally fragile and causing unnecessary increased stress for them.

“There has been a clear failure to balance the interests of citizens, who are legally entitled to purchase cigarettes and tobacco products, with measures that may responsibly and legitimately be taken to combat the pandemic.”

There has been a clear failure to balance the interests of citizens, who are legally entitled to purchase cigarettes and tobacco products, with measures that may responsibly and legitimately be taken to combat the pandemic.

He said 482,441 smokers had signed a petition to uplift the ban.

“Fita is acutely aware, and acknowledges, that the government, as a whole, is tasked with the monumental duty to contain and limit the spread of Covid-19. Many of the efforts are commendable ... However, in the midst of a pandemic, we cannot allow our constitutional prescripts to be violated in the manner in which they have.

“No rational basis has been provided by Dlamini-Zuma to demonstrate a link between the prohibition on the sale of cigarettes and tobacco products, and steps being taken to prevent the spread of Covid-19.

“Internationally, China, South Korea and Taiwan are touted as successfully dealing with the spread of Covid-19. None of these jurisdictions banned cigarettes or tobacco.”

He said if health was a factor, “why was there not a prohibition on non-essential and unhealthy goods, such as junk food, chocolates, fizzy drinks and sweets”.

“Health minister Dr Zweli Mkhize has been quoted as saying underlying illnesses, including diabetes, hypertension and chronic renal disease, have been the pattern for most of the deaths that had been seen.”

Speaking to Times Select outside court, Mnguni said the gist of their arguments was that there were two conflicting decisions by two senior executive members of government.

“He wouldn’t have made an announcement of such magnitude without consulting, like there would have been with the first decision. We are arguing procedural fairness.”

He said while the Disaster Management Act banned alcohol sales, it did not ban the sale of cigarettes.

“The lockdown regulation drafters would have been aware that the act did not permit them to ban cigarette sales.”

Constitutional law expert Pierre de Vos said the ban of cigarettes was “neither here nor there”.

“Cigarettes are not the issue. The question is how are cigarettes and smoking linked to the purpose of the declaration of the disaster.

“We don’t know at this stage because we have not really been provided with clear arguments as to why smoking is linked to the spread of the virus.

“It is not possible to say as we have not been afforded the luxury of detailed explanations so one can make an assessment. Without facts we cannot assess arguments which have not been made.”

What were they smoking? SA’s big tobacco body ...

Sars comes under fire for plan to smoke out ...

Yes to mutts, no to butts: minister does u-turn ...

British American Tobacco is in hale and hearty ...