‘Our miracle’: meet the man who defied the odds to beat Covid-19

‘Our miracle’: meet the man who defied the odds to beat Covid-19

A long and agonising journey for Eastern Cape family ended when Andre Nel, 62, walked out of hospital a ‘hero’ 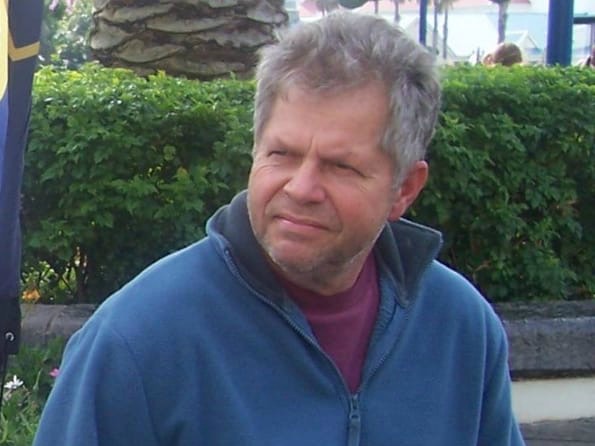 Fighter Andre Nel, 62, has been sent home for the duration of his recovery after surviving Covid-19.
Image: Supplied

The 62-year-old Andre Nel still does not know when and where he contracted Covid-19, but after being sick for 27 days and connected to a ventilator in hospital, his wife’s prayers seem to have been answered.

The couple, who lost a son at the age of 12 to cancer, is now celebrating his recovery alongside the nurses and doctors who cheered him as he walked out of the Life St George’s Hospital in the Eastern Cape.

On April 5, just days before the nationwide lockdown, the close-knit Algoa Park family received the dreaded news – Nel had become one of the first people in the Bay to  contract the dreaded virus.

He had not travelled abroad, had not been in contact with a known positive case, and had not socialised with anyone who had recently returned from a high-risk country.

Nel’s wife, Michelle, believes he may have picked up the virus while shopping for groceries, but the family can never be sure.

He can’t remember anything from the 11 days at home before being admitted.

Michelle said Andre had been sick for 11 days before his test returned positive.

His symptoms included a constant cough, headaches, dizziness and confusion, and he became very weak as the days went on.

He also developed breathing difficulties and, on April 6, was finally admitted to the isolation unit at St George’s Hospital.

“He can’t remember anything from the 11 days at home before being admitted,” Michelle said.

They went into immediate isolation at home.

But Nel’s 16-day hospital stay – most of which was spent on a ventilator or under heavy sedation – was particularly draining on Michelle, who was not allowed to see her husband, even during the times when she was told things were “not looking good”.

Sometimes she spent hours worrying when she was not able to get an update on his condition, knowing things could go wrong at any time.

She was sometimes left not knowing if she would ever see him again.

“But I always believed deep down that he would get through this,” she said.

I was also told all we can really do now is pray, pray, pray.

During the night on April 6, Nel’s condition deteriorated. His blood pressure was dangerously low, and his legs and feet had swollen.

“The hospital phoned to tell me that he was stable but they had to put a pipe down his throat to place him on a ventilator.

“I was also told all we can really do now is pray, pray, pray.”

Faith has always played a big role in the Nel household and they have not been immune to loss.

In January 2016, their 12-year-old son, Ryan, died of embryonal rhabdomyosarcoma, a type of childhood cancer that had spread to his throat and lungs.

During Nel’s time in hospital, Michelle said, she had missed Ryan more than ever.

In another emotive Facebook post at the time, she wrote: “I miss you, my child, especially now. But you are spared of this coronavirus and safe with Jesus.”

Receiving regular updates from the nurses, whom she described as phenomenal, Michelle said they would turn her husband from his back on to his stomach every two hours.

By April 8 there was some improvement. Nel’s vital signs were stable and X-rays showed dramatic improvement in his lungs.

He remained stable throughout the Easter weekend and started receiving physiotherapy.

Though he could still not talk because of the pipe in his throat, he was able to carry out instructions from the doctors and nurses, and remained confused.

From April 13, doctors intermittently turned off the ventilator to see if Nel was able to breathe on his own.

The nurse phoned and put Andre on speaker. His voice sounded strange and he was still quite confused, but he wanted to know when I was coming to fetch him.

Forty-eight hours later, he surprised everyone by managing to breathe unaided throughout the night.

But April 15 was a big day for the couple, the day that gave them the final push they needed to get to the end.

Nel was no longer under sedation and the pipe, which had caused him the most irritation, was finally removed from his throat.

Not only was he able to eat breakfast, but, for the first time in days, Michelle was able to talk to her husband.

“The nurse phoned and put Andre on speaker. His voice sounded strange and he was still quite confused, but he wanted to know when I was coming to fetch him.

“He wanted to play Pac-Man, and he never plays games,” Michelle said with a laugh.

In the following days he also started walking by himself.

On Wednesday, Michelle was told she could finally bring him home.

The hospital staff lined the walkway as Nel waved goodbye.

In the emotive video, Life St George’s hospital manager Alex Daneel can be heard saying that Nel is their miracle case.

“Thank you very much for blessing all of us with your recovery,” another says.

It was not intended to be a public display, but simply to applaud the patient’s return to good health from a virus that we know has taken the lives of others.

Daneel told Weekend Post that during these unprecedented times their staff had wanted to celebrate the recovery of their first ICU Covid-19 patient to be discharged.

“It was not intended to be a public display, but simply to applaud the patient’s return to good health from a virus that we know has taken the lives of others.

“We wish Mr Nel a speedy recovery at home and our thoughts are with those members of our community who have lost loved ones at this time,” Daneel said.

Michelle said: “We are just so thankful that he is home now,” adding he was being quarantined in a separate unit built onto their house and that the family would continue to isolate for at least another two weeks.

“I am still not allowed to touch him but at least he is home where he belongs.”

Michelle said Andre was still a bit unsteady on his feet, and his throat was sensitive from the pipe, but he was resting a lot and able to do things for himself now.

The couple communicate through SMS.

“I only take his food to him but we keep the required 2m distance from one another.”

Michelle said she believed the fact her husband was previously healthy and exercised regularly played a huge role in his recovery.

“Our story shows you that this virus can be contracted by anyone. There should be no stigma attached to it.

“But it also does not need to be a death sentence. You can fight it.” – HeraldLIVE

Covid-19 reminds us we have failed in our mission ...

It’s what Cyil does after the virus that will ...

The state can’t get Covid funds and food to the ...