Mom turns into character from ‘It’ to prank son, a hospital clerk, for not making her coffee in lockdown 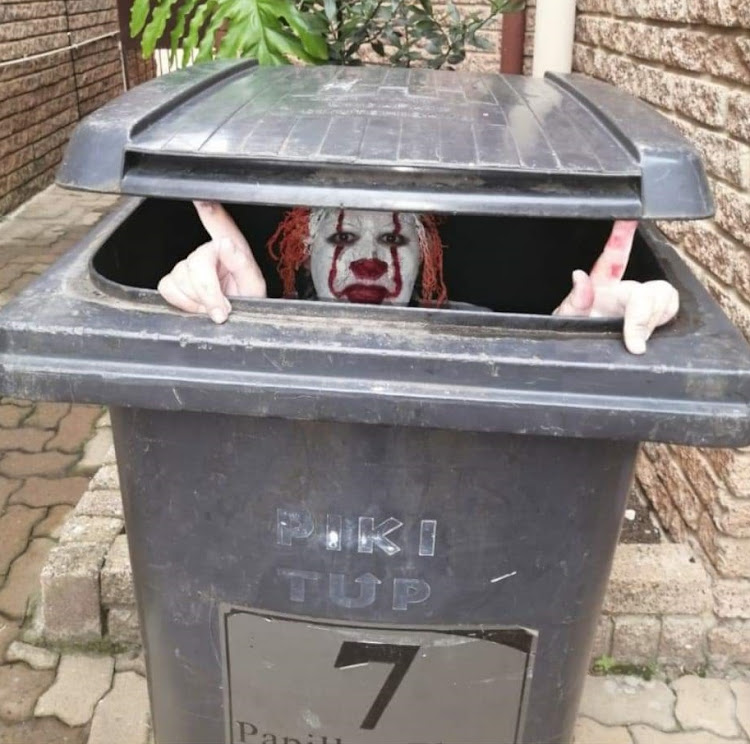 It Girl Ruan Becker got the fright of his life on April 14, thanks to his mother, Hester Greeff.
Image: Hester Greeff

It’s simple: when your mother asks for coffee, get up and make it.

“Ruan!” Hester Greeff called to her son in their Johannesburg home on the morning of April 14, more than two weeks into lockdown.

“She called me again and asked me to make her a cup of coffee,” said Ruan Becker.

Being overly tired, Ruan, a hospital authorisation clerk, “lied”, saying he had a headache.

“She kept quiet. She usually then says something like: ‘When you ask me for something, I do it.’ But this time she didn’t. I thought she actually felt sorry for me.”

Unbeknown to Ruan, there was a plan to get even.

He saw Hester’s boyfriend, Jannie Botha, cleaning the dustbin and went outside for some fresh air.

While he was out, the 41-year-old housewife and Botha transformed Greeff into It villain Pennywise, using old clothing and makeup.

Hester then climbed into the dustbin and waited for Ruan.

“Not long afterwards Jannie took the trash out. Then he asked me to do it. I didn’t say anything, but in my head I was thinking: ‘But you just did’,” said Ruan.

He obliged, picking up the bag and making his way to the dustbin.

As he lifted the lid and saw what was inside, he shrieked with fright and bolted. 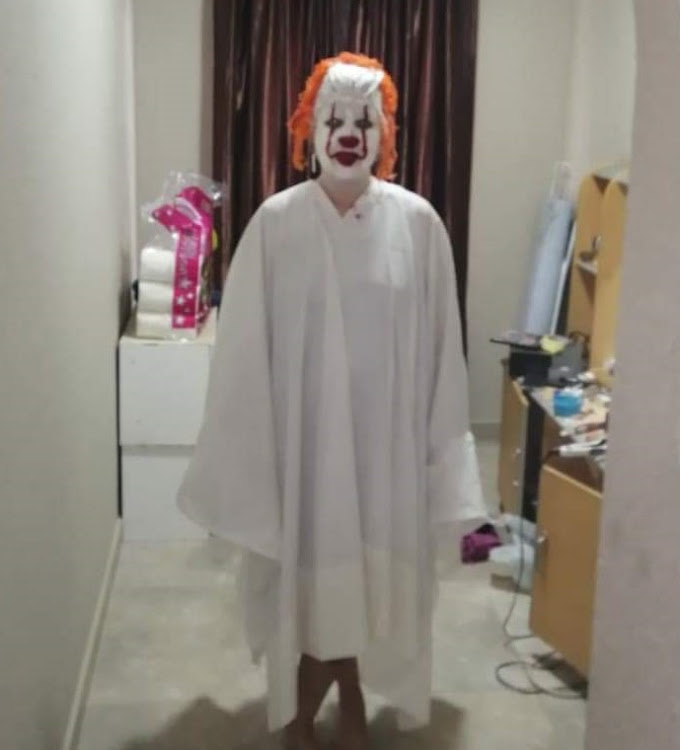 “I didn’t know what to do, I was so shocked. I went in the house and was so scared, and my heart was beating fast, like never before,” he said.

“I fear clowns. The last time I saw one was when I was nine years old and was watching the movie, It. When I watched the movie I couldn’t sleep that night.

“My mother never does pranks. This was the first time!”

Greeff told Times Select: “Since I can remember, Ruan has been afraid of clowns, coming from the movie. I always said I wanted to prank him one day, but this is not really my type of thing.

“So that morning I asked him for coffee and he said no. I wasn’t angry, as we always so no to each other, but I did say, as he walked out of the room: ‘Remember karma.’

“So I told Jannie I wanted to prank him and was going to make an outfit with what I had in the house. Jannie then went down and washed the bin.

“When Ruan opened the lid, I just said: ‘Georgie’ [the main character in It].

“He slammed the lid, screamed and ran off.

“I couldn’t get out of the bin I was laughing so hard. Jannie had to help me get out.

“Needless to say, he now makes me coffee, every time I ask!”