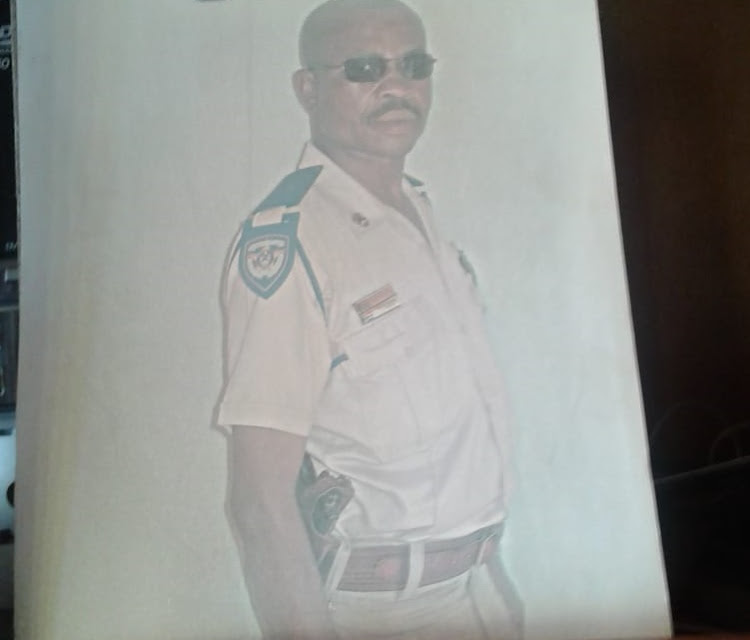 Metro police officer James Xolani Kolo blinked one last time when his name was called, before closing his eyes forever.

Kolo, whose nickname was “James Bond 007", after the fictional British secret service agent, died in the line of duty on April 17, while helping to man a lockdown roadblock. He was hit by a “speeding” motorist, who has been arrested on a charge of culpable homicide.

A self-made name tag, with the words “James Bond 007”,  and, next to it, a South African flag, were visible on Kolo’s uniform as he lay motionless on the ground.

The accident happened on the R41, which links Randfontein and Roodepoort in Gauteng.

Kolo’s friend and colleague, Rand West traffic chief Kenny Mampondo, said he was called out of a meeting after the accident. He immediately dispatched emergency services, then rushed to the scene.

“On arrival, the officer was on the ground. His leg was stuck between the bumper and the exhaust of the vehicle that knocked him down.”

Officer was helping teen who claimed her uncle violated her, when the latter allegedly cornered them
News
2 years ago

Mampondo said when he called Kolo’s name, he blinked, then went still. “When the first emergency vehicle arrived, the officer had already died,” he said.

Mampondo described Kolo as a funny man who loved to joke.

“What I loved most about him is that when I joined the fraternity, he was one the neatest guys. He was always shaved and his uniform was always clean. His shoes shone like a mirror.

“Because his name was James, he called himself James Bond 007.

“It is always devastating and difficult to carry that coffin or send a message of support to the family. I’ve attended many funerals of officers who have died in the line of duty and it never gets easier.”

Kolo, 66, worked for the Rand West Metropolitan Police Department for more than 30 years.

According to his sister, Nomalanga, he was his “normal self and happy” on the day he died.

“He was OK, laughing, smiling as usual.”

We understand that death is natural, but the manner in which he died is painful. It’s easier to let go when a person is sick, but he wasn’t.

She said she and her brother had been inseparable.

“He was like my twin. I would not sleep before he returned from work. I would open the gate for him when he came back late. We were very close.”

Recalling their last moments, Nomalanga said on the morning of the incident they used her car to travel to work. Kolo dropped her off and said he would return the car later.

“Before I could even think of him coming back, I was told to rush home because something had happened. I never expected to hear that he was no more,” she said, her voice trembling.

Nomalanga described Kolo as being protective of his children and family. In his spare time, he was always with those he loved.

“We have suffered a great loss as a family. We are heartbroken. He was a people’s person, he loved his job and all those around him,” family spokesperson Mmalerato Ramasikane said.

“We understand that death is natural, but the manner in which he died is painful. It’s easier to let go when a person is sick, but he wasn’t,” Ramasikane said.

Locals say ministers Cele and Motsoaledi are all talk, and claim foreigners are to blame for crime
News
2 years ago

Kolo is survived by his wife, three children and two grandchildren.

“They are trying to come to terms with everything, but it is not easy, especially for his wife.

“We are grateful for the support shown to us since the day of the incident. Losing a loved one is even worse during this time [lockdown], but people have been with us nearly every day, offering assistance with funeral preparations,” Ramasikane said.

“It is not our part to mourn. It is our right and privilege to celebrate that we were blessed with so rare a community member, who was a genuine friend, a trustworthy colleague, a disciplined human and titan, who surrendered his life for humanity,” Mahuma said.

The prohibition on large gatherings at funerals has added to the family’s pain and sorrow.

“It’s sad because people can’t travel to attend his funeral, but we have accepted the situation as it is, as we do not want to endanger people,” Ramasikane said.

Kolo is expected to be laid to rest on Friday.

Back to normal life? Forget it, says Cyril