Some are hitting the bootleg booze, others are getting the blues as lockdown enters its fourth week 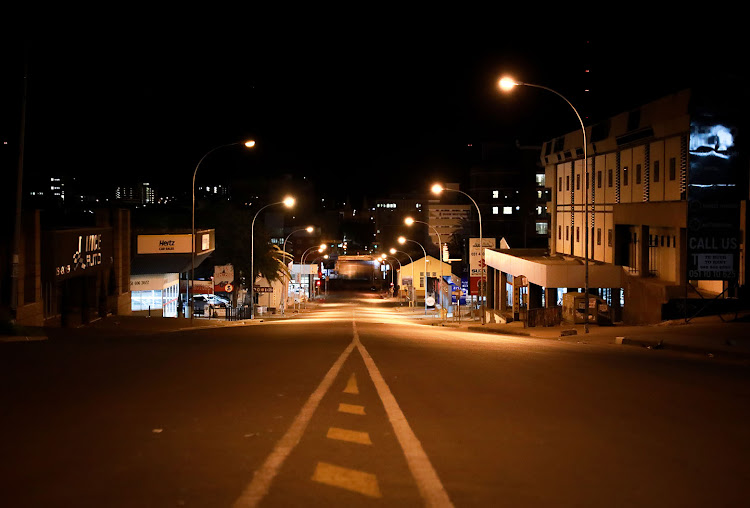 SILENT NIGHT An eerie stillness settles on the streets of Bloemfontein shortly after lockdown began on March 27.
Image: Sebabatso Mosamo

South Africans are showing symptoms of the five stages of grief as they continue to grapple with the realities of the nationwide lockdown.

Across the land, people are running the full gamut of emotions – denial, anger, bargaining, depression and acceptance – as week four of the lockdown begins.

“The context is that the world is in collective mourning; things will never be the same,” said clinical psychologist Colinda Linde.

Denial was in full force from day one in places as diverse as Bramfischerville and Sandton. Residents were seen socialising on the streets, visiting friends, walking dogs, drinking in shebeens and going for runs in the park, as if the lockdown rules were only for other people.

The eruptions of anger have varied from people wanting to report dog walkers to the authorities, to looting of shops in Manenberg in Cape Town.

Everyone thinks ‘It doesn’t apply to me,’ or ‘It won’t happen to me.’

“This is ‘exceptionism’,” said a Killarney resident who wished not to be named. “Everyone thinks ‘It doesn’t apply to me,’ or ‘It won’t happen to me.’”

Anger was graphically displayed in the video of a young man, who has since been arrested, yelling “corona se p**s  and “f**k coronavirus” as he and his brother sped through Lyttleton’s ghostly streets.

After boasting that there were “no p**s police vans here for us”, he then got out of the car in front of Lyttleton’s police station and bragged about smoking tik.

Another man filmed during the police crackdown on day one in Khayelitsha said President Cyril Ramaphosa was “talking shit”.

On being slapped and kicked by a soldier, he moved swiftly from denial to anger.

Amid these scenes of heavy-handed behaviour and impimpi videos of suburbanites going for afternoon strolls, police commissioner Bheki Cele was compelled to issue a statement that people could not walk dogs or go for runs and that the same rules applied to residents of complexes and estates as everybody else.

“Everyone is at different stages,” said clinical psychologist Judith Ancer.

“There is still a lot of denial and a lot of bargaining. It’s complicated because it’s unfamiliar anger. We can’t be furious with the virus. We feel powerless, but we want to exert power.”

It’s a fundamentalist, immature stage. We can ‘other’ everybody else.

The result, said Ancer, was people were projecting their rage onto anyone seen breaking the rules, such as people calling for the army to come and arrest curfew breakers in the suburbs.

“It’s a fundamentalist, immature stage,” she said. “We can ‘other’ everybody else.”

Bargaining, the third stage, is in full flow as those who have run out of necessities such as alcohol, cigarettes and toilet paper, apply ingenuity – and cash – to resolve their shortages.

Despite Cele laying down the law, residents in some complexes in Johannesburg continue to agitate to be allowed to walk and socialise in small groups on the common property of their estates.

While some petitions urge government to reopen parks, others call for restrictions on the sale of cigarettes and alcohol to be lifted.

Bootlegging is brisk as entrepreneurs with well-stocked booze cabinets see a chance to make a fast buck. One Joburg “supplier” had Graca for sale at R500 a bottle and Meerlust Rubicon at R750 a pop.

Bartering is also on the rise with goods in short supply being traded for other commodities at heavily distorted values, such as one bottle of wine for five packets of cigarettes.

As the lockdown continues and people remain confined to their homes, the risk of developing severe depression is acute.

There is an element of danger, and sadness at the loss of a sense of security of before.

Linde said it was not a case of moving from one stage to the next.

“It’s more like an ongoing cycling through them and getting to deeper levels of acceptance each time.”

Emotions would arise once the bargaining phase had passed, she said.

“Typically it’s anger, from the blame, or anxiety, as there is an element of danger, and sadness at the loss of a sense of security of before,” she said.

“Depression is about interpreting everything through a negative lens – about the self, the world, the future. So bad news is magnified and good news discounted, and feelings of helplessness and hopelessness increase.”

Linde said it was essential for people to have support to help deal with negative outlook and help encourage a more positive view.

Ancer said people could boost their morale by positive self-talk, being kind to themselves and budgeting their time on social media.

Preventing depression could be as simple as helping other people in need instead of wallowing in anger.

“Try to make a difference,” she said.

Easing lockdown: these are the crucial questions ...

For whom the school bell tolls: how lockdown ...

Sick to death of your recipe repertoire? SA’s top ...

Moving off the couch could help fend off deadly ...