‘We’re stuck in one of the world’s priciest cities and no one ...

WHO CARES? Trent Hawkins says they have had little clarity from the South African Embassy in Hong Kong and almost no feedback from the department of international relations and co-operation (Dirco).
Image: Gallo Images/Lisa Hnatowicz

A cloud of uncertainty hovers over a South African couple who have been stranded in one of the  world’s most expensive cities, without a source of income.

Trent Hawkins and Kaera Guptar, both 23, have found themselves in a state of limbo in Hong Kong  amid the deadly coronavirus pandemic.

Hawkins, originally from Port Alfred in the Eastern Cape, and Guptar, from Durban, have been in Hong Kong for a year teaching English.

Essentially, South Africa just left us, they just don't care about us.

Hawkins told Times Select they were scheduled to fly back to SA on April 1, but had their first flight cancelled after the announcement of the lockdown. Their second flight was cancelled on Wednesday.

“Today (Wednesday) we were all packed up and ready to go. Then we get the email to say: ‘Sorry your flight is cancelled, you need to wait another two weeks.’ Now we’re stranded, with basically no money.”

He said their families didn’t have much money due to the country’s ailing economy. 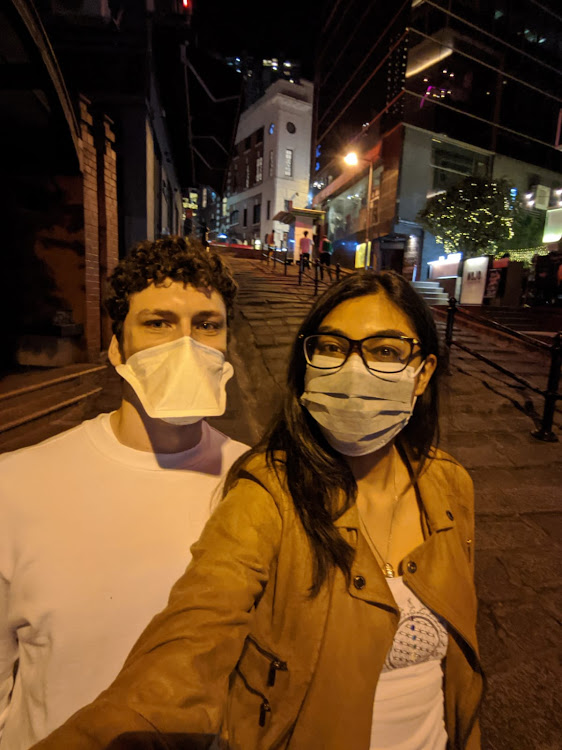 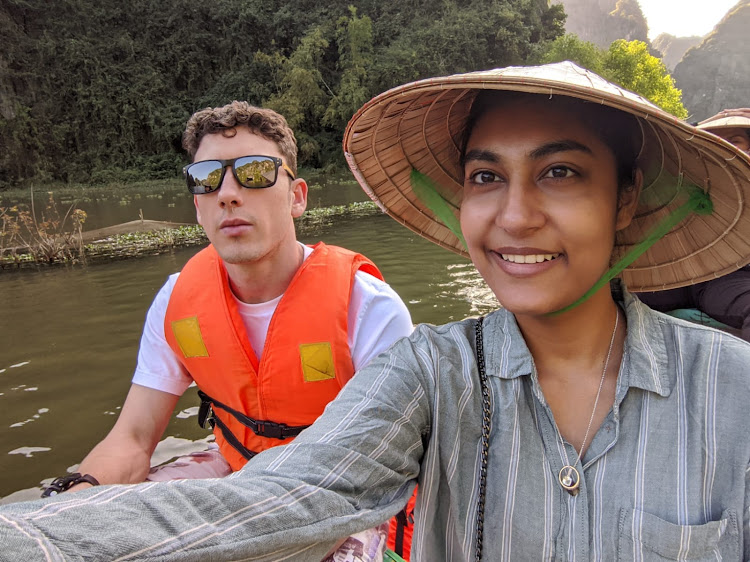 “This is one of the most expensive cities in the world. They have no refugee (centre). Hong Kong doesn’t provide asylum or any kind of support.”

Hawkins said they had had little clarity from the South African Embassy in Hong Kong and almost no feedback from the department of international relations and co-operation (Dirco), despite attempting to contact it on numerous occasions.

“Essentially, South Africa just left us. They just don’t care about us. It’s not me, it’s not only my girlfriend, there are 12 other people here in this same situation, and so many others around the world.”

Hawkins said they were concerned about the coming weeks.

“If they extend it more, are we just meant to live in Hong Kong with no support?”

The pair received an e-mailed response from Corna Klopper, vice-consul of administration at the SA Consulate General in Hong Kong on Wednesday evening: 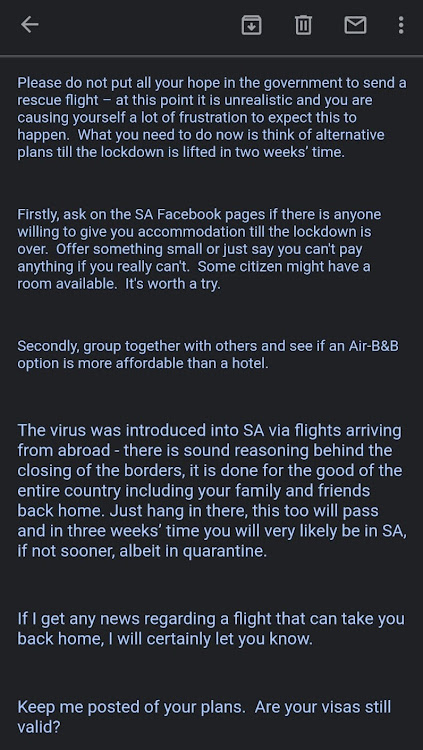 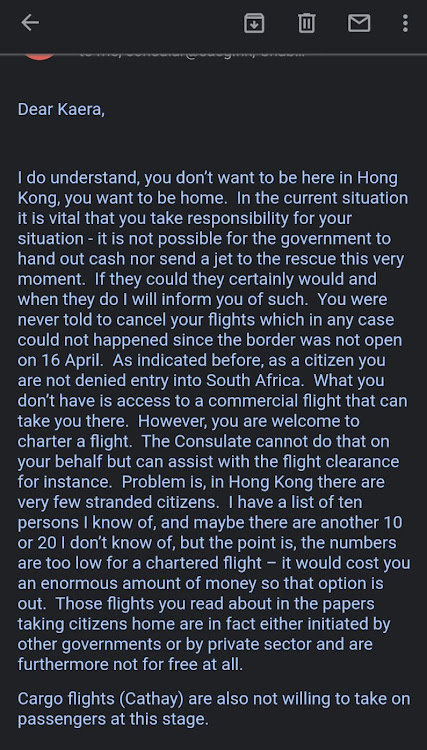 Much like Covid-19, concern for SA expats has spread worldwide, with many uncertain about the future.

Casey Shartin, 24, Mike Pellegrini, 27, and Candice Daly, 26, have been stuck in Florida, US, after their flights were cancelled due to the lockdown extension.

“We had flights confirmed with Qatar — that was for after the lockdown was meant to end. But then it was extended and those flights had to be cancelled,” Pellegrini said.

The trio have been working on a yacht in the Sunshine State and have been lucky enough to arrange an extended stay on the vessel while they attempt to get clarity from Dirco.

Meanwhile, 11 KwaZulu-Natal residents are sitting out quarantine in North West after they narrowly managed to cross the border on Easter Friday.

Markus Potgieter, speaking on behalf of the group, said they arrived in Botswana on March 20 for a trip they planned last year. 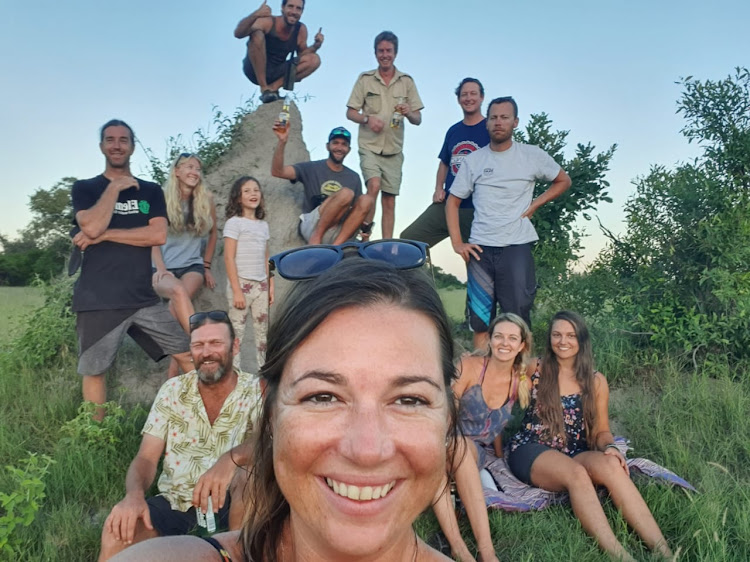 IN QUARANTINE A group of 11 South Africans and their tour guide in Botswana
Image: Mike Potgieter

He said on April 1 they were travelling through the central Kalahari and Moremi when they were approached by a game ranger and notified that Botswana was going into lockdown and they would have to cut their trip short.

“At this point SA had already gone in lockdown. We were told we had to get to the border by midnight and that if we were seen on the roads we would be arrested for travelling without permit.”

Potgieter said the group decided to get to Maun before midnight, when the lockdown was due to start, and take refuge at a camp site two hours out of town, until they could arrange the correct paperwork to get home.

“We drove for 12½ hours, about 960km, from Maun to the border, to find that no one knew about our arrival. No documents were submitted on our behalf. When I called Dirco’s Botswana office they said the SA High Commission had not come back to them and suggested we camp out at the border over the Easter weekend until the commission had submitted our documents.”

We are more at risk of contracting the disease now than if had we gone straight home. There are other travellers here, one of whom has gone to hospital.

Statement from a group of South Africans

Potgieter said nothing had been arranged due to Dirco’s alleged failure to communicate their arrival.

“The staff on the ground were incredibly helpful and supportive, but they did not have a clear directive due to Dirco’s lack of co-operation.”

Eventually the group was escorted by police to a quarantine facility about 350km away.

“We are now safely at the quarantine facility and it is well managed. The staff are helpful and we are comfortable. However, we are more at risk of contracting the disease now than if had we gone straight home. There are other travellers here, one of whom has gone to hospital,” a statement by the group read.

Dirco ministerial spokesperson Lunga Ngqengelele said they were “aware” of the team in Hong Kong.

"[We are] still looking at all alternatives to bring them back home.”

He did not respond to queries regarding the other incidents.

Bathabile, Busisiwe, have the bucks stopped with you?