Government continues consultations on the matter, but promises an answer by the end of Friday 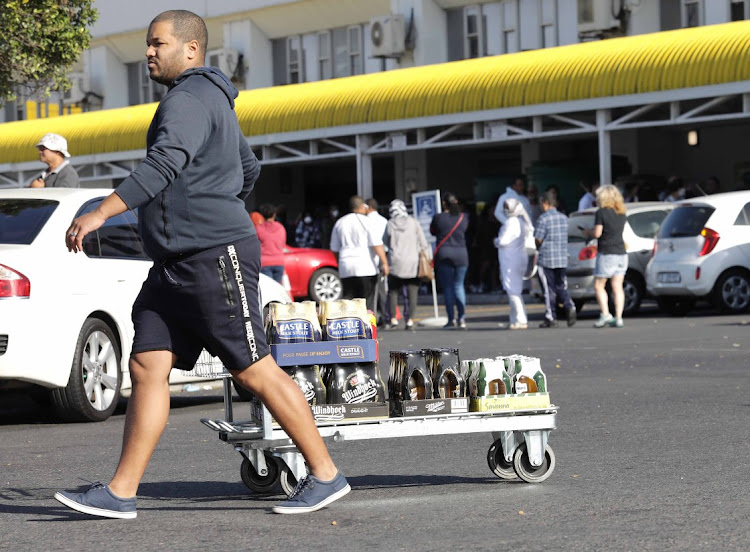 PLAY YOUR CARTS RIGHT Liquor outlets in Cape Town had their hands full​ as people queued to buy alcohol before the lockdown.
Image: Esa Alexander/File

An association of tavern and shebeen owners will know only on Friday whether the government will accede to its demand to lift the blanket ban on alcohol  sales during the lockdown.

The national command council, tasked with coordinating SA’s fight against the coronavirus pandemic, will meet stakeholders this week to discuss an economic assistance programme.

In response to a letter from the Gauteng Liquor Forum’s lawyers to President Cyril Ramaphosa, the state attorney’s office said this week’s meeting may have a bearing on its demand to be allowed to resume sales.

“We anticipate that the results of these discussions may well have a bearing on the issues raised by your client. Therefore, to be in a position to respond to your letter fully, we ask that you afford us until close of business on Friday, April 17,” the state attorney said.

SA is in the middle of a five-week national lockdown aimed at curbing the coronavirus pandemic. By Tuesday, SA had reported 2,415 infections and 27 deaths. As part of its response to the virus that has rapidly spread globally, the government has issued many regulations to ensure citizens remain at home during the lockdown. Among restrictions are border and school closures, restrictions on travel and the number of people at funerals, as well as a complete ban on alcohol and cigarette sales.

Last week the wine industry, which contributes about R38bn to the country’s economy, breathed a collective sigh of relief after the government lifted a ban on exports of their products during the lockdown.

Wine producers had feared that the ban would undermine an industry that supports 300,000 jobs by removing local wine from shelves in key markets such as the UK, Germany, the Netherlands and China. They also feared a loss of market share to SA’s competitors.

Mabuza Attorneys, the lawyers acting on behalf of the Gauteng Liquor Forum,  a nonprofit organisation,  demanded in the letter to Ramaphosa that the liquor regulations be changed. They argued that less restrictive measures could have been used to prevent the spread of Covid-19.

“Our clients would have readily accepted the limitation on their trading hours as was the case when the first Covid-19 regulations were published on March 18. However, a total ban on the selling of alcohol unduly and unlawfully infringes on their section 22 constitutional rights,” the letter said, referring to the right to freedom of trade, occupation and profession.

The Gauteng Liquor Forum said the lockdown extension would most likely “ruin their businesses” and that they did not have access to other means of survival during the lockdown.

While the letter demanded an undertaking by the president to lift the ban by Tuesday, the state attorney’s office  sought a reprieve until Friday and noted their concerns.

Concerns about the potential economic impact of lockdown measures, on small businesses in particular, would continue to receive careful consideration by the decisionmakers, the state attorney’s office said.

The booze ban will only lead to more bored binge ...

Luckily for SA, we can heed what other nations ...

Some of the more illogical lockdown laws need a ...

It’s not a touchy issue: boxes and packages are safe, say experts

Businesses stress about relief cash as ‘chancers’ try their luck