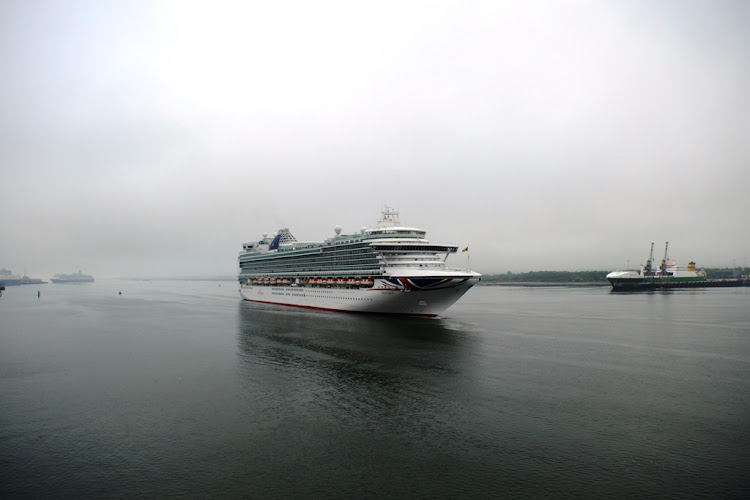 IN THE DOLDRUMS A P&O Cruises vessel approaches Southampton. The company has joined most of the world's cruise lines in suspending voyages in the wake of the coronaviris crisis
Image: Paul Ash

On January 20, the cruise ship Diamond Princess put to sea from Yokohama, Japan, and set course for Hong Kong.

Aboard the vessel was an 80-year-old man who tested positive for the SARS-CoV-2 virus a few days after the vessel docked in Hong Kong.

By the time the ship neared Yokohama on its return voyage a week later, a dozen passengers had tested positive for the virus.

Japanese port authorities quarantined the vessel and passengers were confined to their cabins. The crew, however, kept on working, and over the following weeks 700 people on board fell ill.

Elsewhere, other cruise ships were also reporting coronavirus cases on board.

US authorities barred the Grand Princess from docking in San Francisco following the death of a passenger who had disembarked from the cruise ship at the end of its previous voyage.

On March 19, the Ruby Princess docked in Sydney with a slew of undiagnosed cases aboard. Its 2,700 passengers – many of them “spluttering and coughing”, the BBC reported – were allowed off the vessel without being screened by the port authorities.

Before the crisis, Forbes estimated the global cruise industry was worth $150bn and employed some 250,000 people worldwide.

New South Wales health officials tried to limit the resulting fallout, saying the passengers had been allowed to disembark because the ship’s route – from New Zealand to Australia – was deemed “low risk”.

Across the globe, official health warnings followed. The US state department  said Americans “should not travel by cruise ship”, with the Centers for Disease Control (CDC) adding there was an increased risk of Covid-19 infection in a cruise ship environment.

Before the crisis, Forbes estimated the global cruise industry was worth $150bn and employed some 250,000 people worldwide.

But revenue forecasts are now in tatters as cruise lines cancel voyages and programmes.

On March 11, Viking Cruises halted all its cruises until the end of April.

Two days later, Carnival Cruises said it was stopping all voyages. Its other brands, which included such famous lines as Cunard and P&O Cruises, soon followed suit.

“The season would have run until April 30, but all cruises are now cancelled,” said Ross Volk, managing director of MSC Cruises SA.

Its ship, the 3,200 berth MSC Orchestra, is now moored in Durban harbour. Most of the crew has been repatriated while those from countries whose borders and airports are shut are being accommodated at MSC’s expense in local hotels.

Passengers would be offered vouchers to redeem for voyages when the new season starts in November.

Volk would not comment on the revenue lost as the company follows the rest of the local travel industry into lockdown.

Volk said MSC’s call centre was closed and a skeleton staff was working from home on plans for the next cruise season, set to begin in November.

He was worried, however, about the long-term effects on the travel industry as the economy goes into lockdown.

“I’ve never experienced anything like it,” he said. “What is going to be the effect [on business]? Everything depends on how quickly we get this contained.”

MSC Cruises, the Italy-based parent of the local company, has also extended the halt on its programme from April 30 to May 29.

While MSC has enjoyed a spectacular growth curve on the back of the worldwide cruising boom – it posted a net profit of €405m on total revenue of €3.2bn in 2019 – the shutdown will certainly make a dent in earnings.

Cruise ships are capable of being quickly provisioned to serve as hospitals with up to 1,000 hospital rooms.

In another blow, the major cruise lines may see none of the $2-trillion bailout package announced by the US Senate last month, CNBC reports.

Some $500bn of the package is earmarked for distressed businesses as long as they are created and organised in the US. But a number of the major lines such as Carnival, whose headquarters are in Panama, and Royal Caribbean, which is incorporated in Liberia, do not meet this requirement.

The knock-on effects are already being felt as shipyards halt production. Papenburg-based Meyer Werft shipbuilder told World Maritime News that although its order book was filled to 2023, the major lines, which account for about 80% of market share, were losing about €100m a day. That is likely to spell cancelled orders for new ships.

Despite the uncertainty, the yard is still in production, though the other big yards such as Fincantieri and FlensburgerSchiffbau have stopped work.

Frantic demand for the discounted bond, which was priced at 11.5%, swelled the order book to $17bn, Bloomberg reports. The offer raised some $4bn for the company, which said it needed about $1bn a month to ride out the crisis.

Andra Tutto Bene - all will be well.

The Holland America line ships Zeedam and Rotterdam were denied entry to Florida and other Latin American ports because they had coronavirus cases aboard, with Florida governor Ron DeSantis saying their passengers could not be “dumped” in the state.

The governor later relented and the Zeedam was allowed to dock. Non-US nationals aboard were immediately flown home on charter flights.

With their ships now empty and most cruising programmes on hold until late next month, a number of companies offered their vessels as hospital ships.

“Cruise ships are capable of being quickly provisioned to serve as hospitals with up to 1,000 hospital rooms that can treat patients suffering from less critical, non-Covid-19 conditions,” Carnival said.

MSC has converted the ferry MSC Splendid into a hospital ship to help relieve the pressure on hospitals in Genoa.

The crew later illuminated the ship’s side with the words “Andra Tutto Bene” – all will be well.

Ramaphosa’s response to Covid-19 gets a huge ...

Airlines, travel agents wing it to cope with the ...

The Vaal is going to pong for a good while yet