The discovery of the partial skeleton of a child provides clues to modern human growth patterns, say scientists 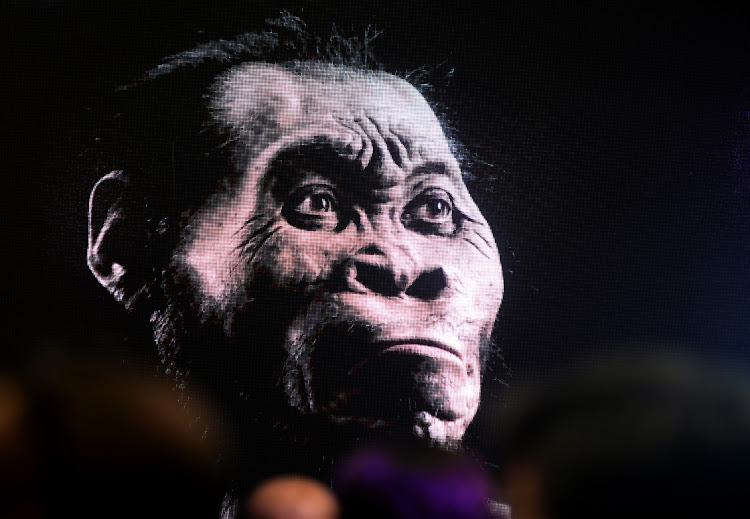 HISTORIC MOMENT The discovery of Homo naledi was announced at the Cradle of Humankind in September 2015. Naledi stood about 1.5m high, had a brain about the size of an orange, a slender body and unusually curved fingers.
Image: GETTY IMAGES

After giving humanity a new ancient relative, the Dinaledi chamber at the Cradle of Humankind has begun putting flesh on the bones.

Five years after it gave us Homo naledi, the 20m² cave at the Rising Star system near Krugersdorp has yielded the partial skeleton of a child.

Jurassic jigsaw The bones conclusively and provisionally linked to an immature Homo naledi skeleton from the Dinaledi chamber.
Image: PLOS One

Because we don’t know how quickly Homo naledi children matured, the estimated age of the individual, dubbed DH7, ranges between eight and 15.

However old the child was when it died, scientists say it fills a gap in our understanding of how our ancient relatives grew into adults, and how modern human growth patterns evolved.

“The rare juvenile Homo naledi partial skeleton will shed light on whether this extinct species is more human-like in its development or more primitive,” said Wits University’s Debra Bolter, reporting the discovery with colleagues in the journal PLOS One.

“The findings help reconstruct the selective pressures that shaped extended maturity in our own species.”

When the Dinaledi chamber was first accessed through a 12m narrow vertical passage, about 300 fossil fragments were scattered across its floor. In 2013 and 2014, more than 1,800 specimens were recovered, mostly from a 16cm excavation in an area of just 0.8m².

FLOORED A schematic of the Dinaledi chamber floor area, showing the distribution of adult and immature material recovered from the surface during the 2013–2014 expedition.
Image: PLOS One

The fossils were dated to the late Middle Pleistocene, between 335,000 and 226,000 years ago, possibly overlapping in time with the earliest Homo sapiens.

Sixteen arm and leg bones and a partial jaw containing teeth attributed to DH7 were not fully developed, and Bolter said they displayed a mixture of maturity patterns seen in modern humans and earlier hominins.

DH7 was estimated to be similar in its developmental stage to immature specimens of other fossil hominins who died between the ages of eight and 11.

But the scientists said that if Homo naledi had a slower growth rate, like modern humans, DH7 might have been as old as 15.

Bolter said some of the DH7 remains had never before been discovered as immature bones in the sub-equatorial early hominin fossil record.

Only three other immature fossil examples of hominin species were known: Australopithecus afarensis (Ethiopia and Kenya), Australopithecus sediba (Malapa fossil site at the Cradle of Humankind) and the widespread Homo erectus.

“Augmenting this limited data set is of great significance in trying to understand the evolution of human growth and development,” said Bolter. 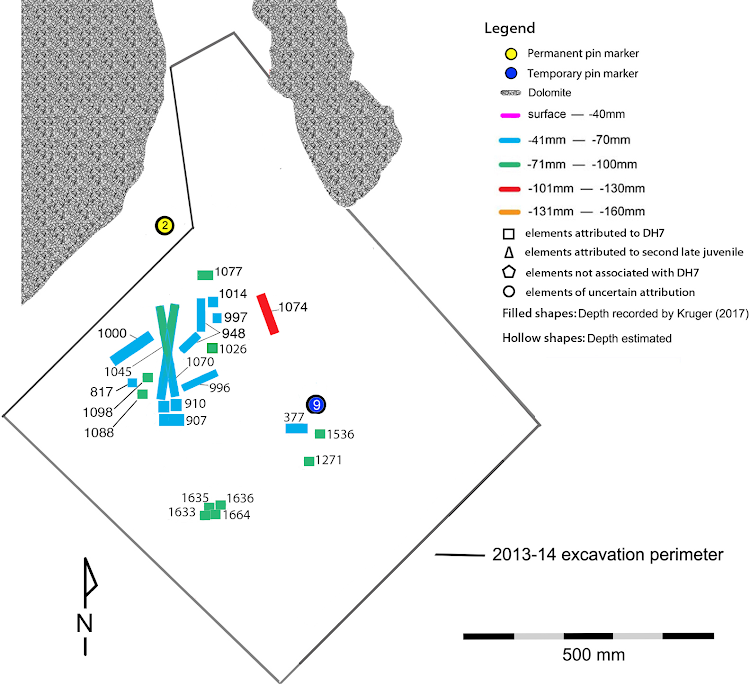 NEW FIND A schematic of the Dinaledi chamber showing the location of bones attributed to DH7.
Image: PLOS One

She said the “commingled nature” of bones excavated from the Dinaledi chamber made it difficult to link them to individuals, but physical proximity, high-resolution data and anatomical assessment of the collection had allowed her team to identify several portions of DH7.

“We set a very high evidentiary standard to accept the association of different elements. Anatomical in situ articulation of the left lower limb elements provides certain evidence that these elements represent a single individual, deposited with soft tissue still intact.” 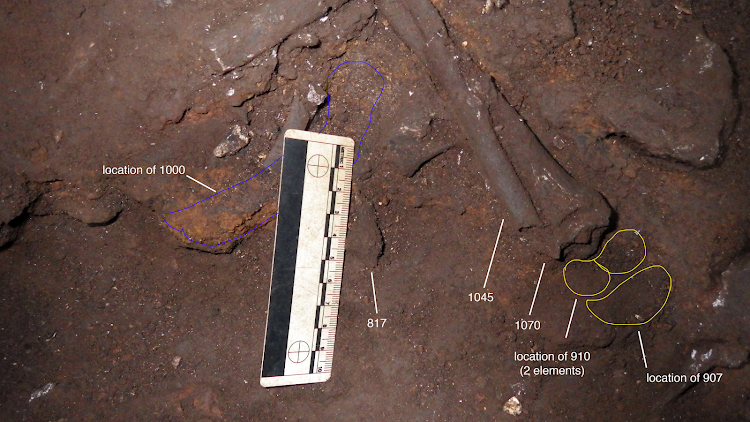 Fragments of hand bones had been found near the lower limb and jaw, and had been provisionally linked to DH7, said Bolter.

“However, we note that the abundance of material in the present collection may still represent only a small fraction of the total amount of hominin skeletal material in the Dinaledi chamber as a whole.”

The depth of sediments in the cave, which is 30m underground, was unknown. “Consequently, we cannot predict what other remains of this individual may yet be recovered.” 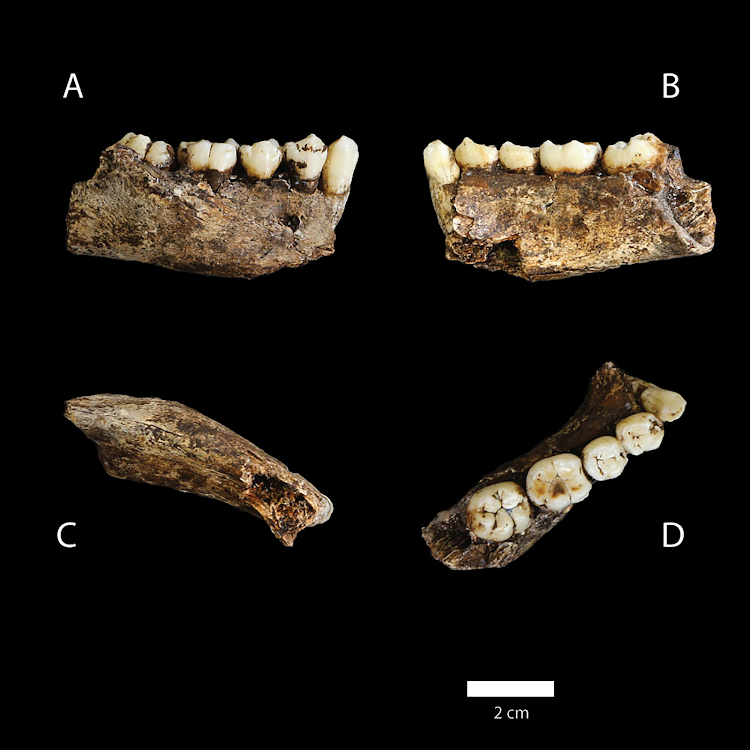 Bolter revealed that sediment from the Dinaledi chamber “appears to contain multiple fragments of an infant cranium”. However, analysis of this thin and fragile material has only recently begun and identifications and descriptions were still under way.

Homo naledi fossils are curated at the Evolutionary Studies Institute at Wits University in Johannesburg. Three-dimensional surface models and images of DH7 elements are available for public access and download at Duke University’s Morphosource.org. The latter tertiary institution is based in North Carolina, US.

A wise old owl: New clues to the mystery of Homo ...

Wanna be an ‘astronaut’? Here's your chance to ...

Skeletons were in the closet. Now they’re in the ...

Myth busted: our ancestors ate carbs and veg, not ...

This hero refuses to abandon the orphans in the virus storm