Streets vs shelters: Officials race to get terrified homeless ...

The challenge, however, is keeping them in shelters, some of which are makeshift and battling to cope 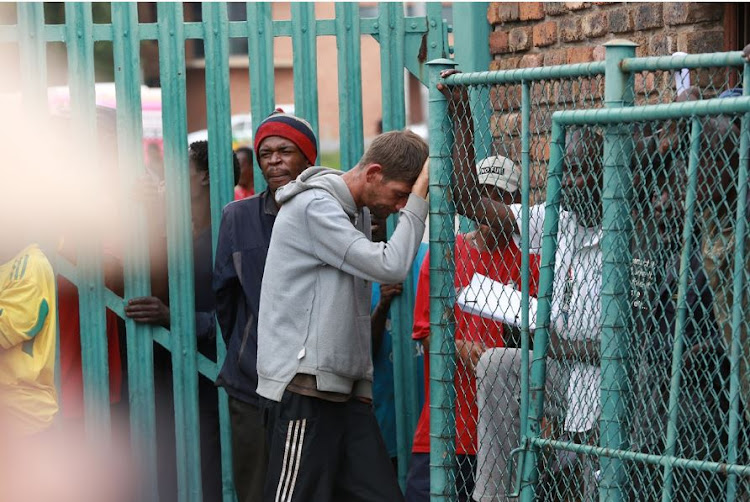 desperate times Homeless men at the Caledonian Stadium in Pretoria wait to be screened for Covid-19, before being placed into shelters. City officials are rushing to find accommodation for nearly 10,000 homeless people in a bid to protect them from the coronavirus.
Image: Thapelo Morebudi/The Sunday Times

His clothes and shoes are tattered, his face badly sunburned. He clutches a grubby piece of paper tightly in his hand. It contains a message, which is vital to his survival.

“I am deaf. I don’t understand what is happening. Please can someone help me.”

He is terrified and confused. He won’t let people take the note from him. Attempts to take a photo of it are met with angry yells.

Living under a bridge in Nelson Mandela Drive in Pretoria for five years, according to his friend, Sidwell Dlamini, the two, with nearly 10,000 other homeless people, have been rounded up by police and city authorities desperately trying to stop Covid-19 infecting Tshwane’s most vulnerable citizens.

The scenes at the stadium, which on Monday became a tented city for 2,000 people, are chaotic. The primary function of the venue, that can only accommodate 340 people if social distancing is practised, is to screen the homeless before they are taken to shelters in Tshwane.

City officials are, however, battling to get people to stay in the shelters, with many unable to understand why they have been removed from the streets.

“I know these people want to help, but I am scared. We are told there is this sickness, but we don’t know what it is. Can you tell us what it does? If we are taken from the streets, where will we be taken?” asks Dlamini. 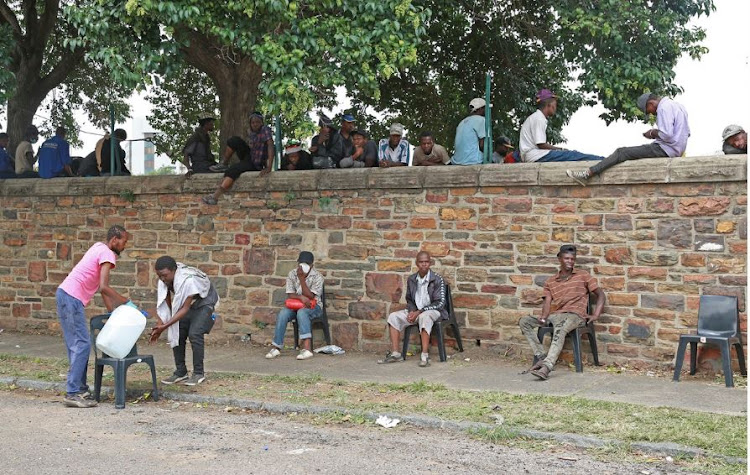 Jackie Moumakoe, who is homeless, frantically tries to get his friends to line up outside the stadium’s gates.

“Baba, if we stand here, we will get food. See, the food is coming. Those people are doctors. They are going to help us,” he tells an elderly man clutching his blanket and meagre belongings.

Moumakoe is among a handful of volunteers working at makeshift shelters across the city.

“I have to help. Many are on the streets because they can’t cope with life. When the police came, they were rough. They came to my spot in Struben Street. They forced me and others into the back of vans. Many had to leave their belongings behind. No one understood what was happening.

“Some from the churches came to tell us to prepare to be moved. They told us about this corona, but it does not mean much to us. People here are very scared. I was scared when I first came, but the doctors told me that as long as we listen we will be all right.

“I am now trying to help the others. I am telling them what this virus does and why it is important that we must go inside the buildings that we are being taken to.”

They told us about this corona, but it does not mean much to us. 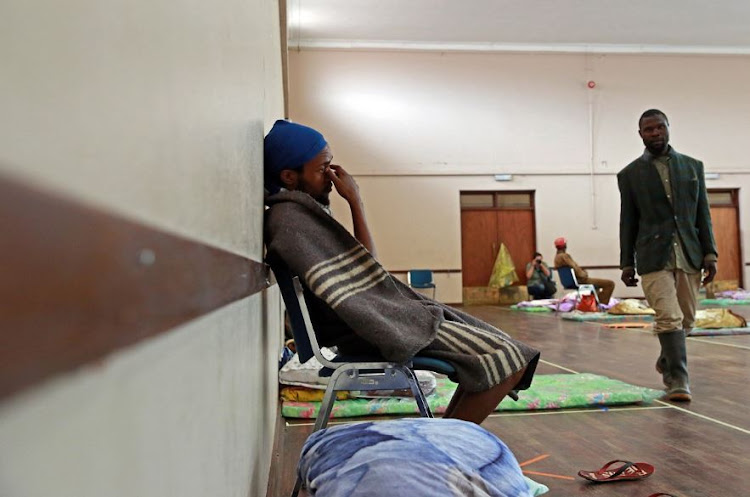 Tarryn Johnston, like Moumakoe, was thrust to the fore of the Covid-19 fight in Tshwane.

Her non-profit organisation, Hennops Revival, which she established in September to clean up the rivers in Centurion, is now an integral part of the city’s fight to save the homeless from Covid-19.

With her grass roots network, which includes hundreds of people living on the banks of the Hennops River, she is vital in helping find the vulnerable, distributing emergency food parcels and getting people into shelters.

After the December floods in Gauteng, she has a list of halls and safe places where people can be housed in an emergency.

“We are running the shelter here at the Lyttelton Community Hall. We thought people would come in dribs and drabs, but within hours we were at capacity,” she said.

Donated mattresses and blankets are lined up in neat rows, all correctly spaced apart.  A masking tape X on the floor next to each mattress marks the boundary for those allocated a space.

At least I have food. I can’t remember when I last ate two meals a day, or even one. 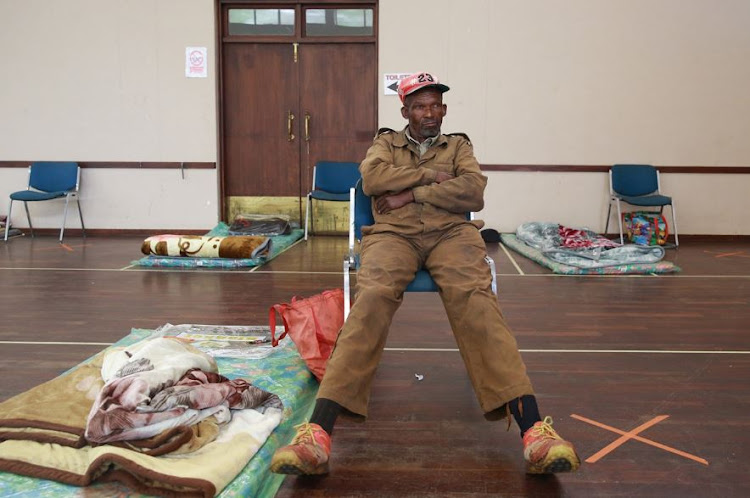 HAPPY Matthews Rakomane, who is living in the Lyttelton Community Hall, is grateful for the meals he is receiving at the shelter.
Image: Thapelo Morebudi/The Sunday Times.

“There are just so many people out there. Close to here are 50 people living under a bridge. We are searching for a space for them, but it’s tough.

“In Centurion there are 880 people living on the streets. We are trying to get as many as possible into shelters. The biggest challenge is space. Because of social distancing, you cannot have lots of people in a single place. While we are coping here with the 40 that we have, at other places it’s total chaos.

“That’s why it is so important to find places which can accommodate small groups immediately.”

Matthews Rakomane, who is sheltered at the hall, said he is happy.

“At least I have food. I can’t remember when I last ate two meals a day, or even one.”

The Homeless Uplifting Project centre manager Buang Mfumane, whose facility can accommodate 65 people, said they had 120 people at their shelter.

“We are trying to direct people to other shelters, but everywhere is full. Our resources, especially food and blankets, are dwindling quickly.”

Tshwane Homeless Forum chairperson Joel Mayephu said they were racing to get the city’s 10,000 homeless people off the streets.

“The challenge is there are not enough places to put everyone, especially if social distancing is adhered to. We are engaging churches and community centres to assist. Any place that has floor space, which is unoccupied, we will use.

“Sports fields in Pretoria West have been converted into tent cities, with 600 people living in tents on a rugby field in Danville.”

Mayephu said another problem was that many of the homeless did not want to be taken from where they were living.

“Many have been forcibly removed from where they were and have lost a lot of their belongings. They are scared and try to leave.”

Many initially came for the food and a place to sleep, but because they don’t want to be confined, they have disappeared.

Omogolo Taunyane-Mnguni, spokesperson for Tshwane administrator Mpho Nawa, said the city only had three shelters, one of which was for women and children. It had capacity for 200 people.

“We are facing major challenges. We have set up tented cities and approached churches for help.”

She said the biggest challenge was keeping people in the shelters.

“Many initially came for the food and a place to sleep, but because they don’t want to be confined, they have disappeared. We are working with our NGO networks to trace them and get them back into shelters.

“We are rushing to do this because not all the results from the Covid-19 screening processes are back. There is a chance people may be ill and spreading the virus without us knowing.”

* Not his real name.

Big Brother will be watching you, SA, but he can’t hear your chats