They will also have to make their own arrangements with airlines, and go into quarantine for 21 days 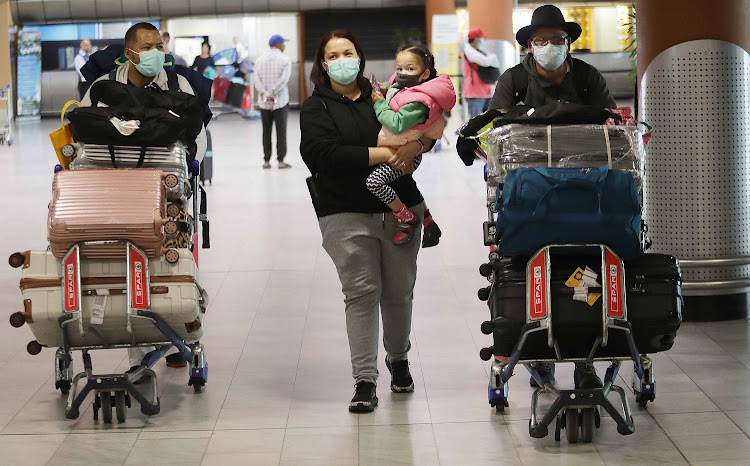 SAFE AND SOUND South African citizens who can organise their own way home will be allowed to return to the country. File photo.
Image: Esa Alexander/Sunday Times

The government says it will allow the more than 1,400 South Africans stranded abroad to return if they are able to organise their own way home.

When they arrive they will have to undergo mandatory quarantine, regardless of which country they are coming from. This may last up to 21 days.

Transport minister Fikile Mbalula issued new directives that will allow citizens, permanent residents and those who work in SA to be allowed into the country.

However, the government is not yet undertaking to repatriate citizens abroad as SA grapples with the Covid-19 pandemic.

Addressing the media on Tuesday, Mbalula said South African citizens can return home, provided they have a fully paid return flight and agree to be subjected to mandatory quarantine for up to 21 days. The crew on their flights will also have to subject themselves to quarantine.

This directive comes after the government said no flights would be allowed into the country after President Cyril Ramaphosa announced a 21-day lockdown on March 23. It began on Friday.

On Tuesday, there were 1,353 cases of Covid-19. Four people have died from the disease.

“Part of the challenge is that when the lockdown was implemented, South Africans on their way home from foreign countries were stranded. The airlines coming to SA were cancelled. You have South Africans with the capacity to repatriate themselves, with the support of airlines,” Mbalula said.

He said the lockdown still stands.

“We are catering for South Africans who can get airlines to bring them home,” Mbalula said.

International relations and co-operation minister Naledi Pandor said the most recent data suggests SA may have 1,471 citizens stranded across the world — 723 students, 204 workers, 224 tourists and 320 who haven’t disclosed their travel status.

“Given the difficulties associated with travel restrictions, we appeal to those who can afford to return to do so at their own cost. Some have started organising themselves into groups and have approached the department to ensure their safe passage home,” Pandor said.

She said some have explored options such as private charter flights.

“For those who cannot depart, my department will be liaising with families and friends in SA to contribute to the payment of accommodation,” Pandor said.

She cautioned South Africans who might not be stranded or distressed to remain where they are to reduce movement until the end of the lockdown.

As part of the amendment to the directives, Mbalula announced that all cargo will be allowed into the country. Initially the regulations stated that only essential goods would be allowed..

Technical landings will also be permitted.

Mbalula said he is in talks with the taxi industry on how it has been affected by the lockdown, which enters day six on Wednesday.

He said government did not have funds to subsidise the industry, which is largely unregulated.

Panicking Dutch dad fails in bid to get son out ...