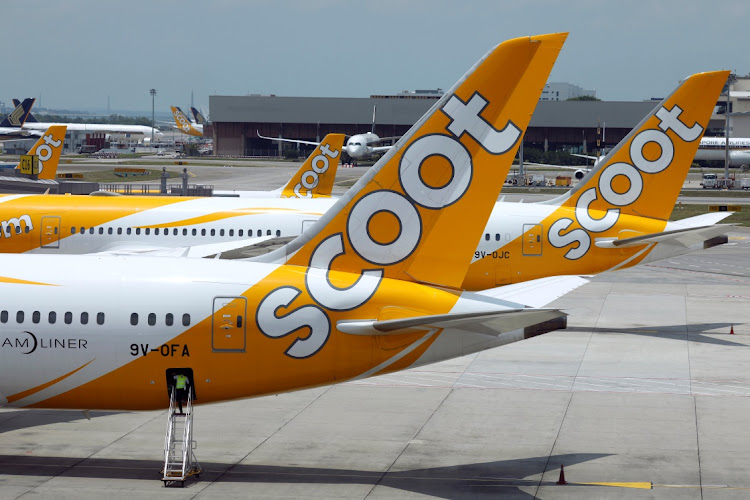 LOCKDOWN LOSS Scoot and Singapore Airlines planes at Singapore Changi Airport. A court battle by a Dutch businessman to get his son out of SA before lockdown was unsuccessful.
Image: Edgar Su

A Dutchman who leads a large Durban-based subsidiary of an international firm failed in his bid to get his son out of SA ahead of the lockdown, with a judge ruling that it was “akin to panic buying”.

The dad, who is separated from his wife, launched an urgent Durban High Court application last week to get an order allowing his teenage son to go back to the Netherlands, where, he argued, he would be safe from crime and have access to better health care during the Covid-19 pandemic.

The couple cannot be named to protect the identity of the child.

His estranged wife opposed the application, saying the 13-year-old child would be safe with her in a gated estate on the KwaZulu-Natal North Coast.

The father, in his affidavit, said he had been instructed by his head office to return and ensure that all Dutch nationals working for the firm in Durban return home immediately.

He, however, had to remain to ensure the smooth running of the firm.

He had bought air tickets and arranged for his son, who had been living with him for the past few months, to travel with his colleagues and stay with family friends in the Netherlands.

He said he and his wife, a Spaniard, had lived in many countries and his son had been born in Thailand. Soon after they had relocated to the Netherlands, where they lived until 2016, when he was posted to SA.

They separated last year and, from January this year, his son had been living with him.

He received an e-mail from the executive board advising him that all “expats” must return with their families because “while the situation might seem under control, experience shows that this can change overnight”.

He contacted his wife and informed her that she could also return and the company would pay for air tickets and temporary housing.

He indicated a “real concern” that SA could see tens of thousands, if not hundreds of thousands of infections “which will inundate the health system and make it impossible to receive medical help”.

The combination of the disease and the economic fall-out will result in people losing their jobs, which will likely lead to increased criminality, looting, protests and unrest.

Dutch father who heads a multinational company in Durban

“The combination of the disease and the economic fallout will result in people losing their jobs, which will likely lead to increased criminality, looting, protests and unrest,” he said.

While the repatriation of his son was “only a temporary measure” until the situation stabilised, his wife had refused to leave SA or give her consent for his son to do so, he said.

A letter from her attorney, detailing her objections, was handed in at the urgent hearing before acting judge Rob Mossop.

In it, she said she lived in a secure estate manned by 24-hour guards.

She said for her son to return to the Netherlands he would have to travel on two different flights for 20 hours and “the risk of infection must be described as more than possible”.

She accused her husband of being “totally irrational and even possibly neurotic about the situation”.

“In SA, with the population of approximately 60 million people, there are 274 confirmed cases. There are no deaths. On the other hand, in the Netherlands which has 17 million people, less than a third of the South African population, they have 4,204 confirmed cases and 158 deaths. It is very apparent from these figures that it is much, much, much more safe for him to be in SA than anywhere else.”

She said SA’s private health-care system was “very good and most probably one of the best in the world”.

“Although the medical system in Europe is much better, the reality is that advanced first-world countries like Italy, Spain, France and even now Britain are being overrun. Holland is in the epicentre of the pandemic.”

Mossop refused to grant the order, saying the child would be safe in SA, had access to private medical aid and the father was being “overly concerned, akin to panic buying”.

Alan Pullinger gives us the lowdown on the fate of small businesses, the role of banks and more
Business
2 years ago

Easter is critical for tourism, but travellers will be stuck at home by the time this peak period arrives
Business
2 years ago

Bheki Cele and his ilk are fermenting a hangover nobody wants

Standing together (but not too closely): Saffers unite to fight the virus