South Africans are desperately worried about job security amid the pandemic. We spoke to some of them 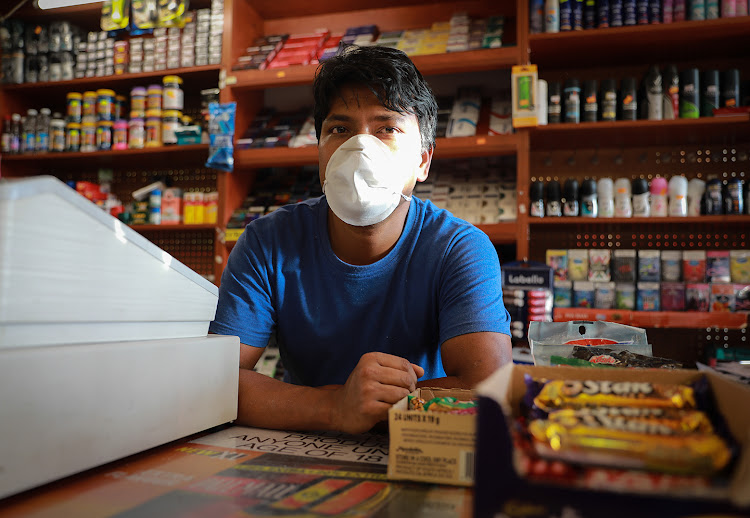 fear unmasked Ranjit Chowdhuri at the Saha Supermarket in Florida. He employs five people and is concerned about how the 21-day lockdown will affect business despite the fact that the shop sells food and other essentials.
Image: Sebabatso Mosamo

Samson Makamo has to stretch the money he earns doing piece jobs in Johannesburg's Craighall Park to support himself and 12 dependents in Malawi. Now that tenuous security is buckling under the lockdown.

On Wednesdays, the 50-year-old works as a groundskeeper at a complex. The body corporate has paid him for the three weeks he will be away. But his Thursday and Friday employers have turned off the tap until he returns to work.

“Of course I’m worried. I haven’t got any food at home because I was just paid. Luckily I have my scooter, so I don’t need to use public transport if I need to get to the shops. But I am unable to provide for my family back home.”

Makamo joins many other vulnerable people whose income is under threat as businesses closed shop. Employees in homes and complexes are also forced to stay at home, many of them without an income.

Gerhard van Vuuren, 40, was distressed when Times Select spoke to him this week at his local grocer in Florida, on the West Rand.

Van Vuuren works at a custom stretch-canvas manufacturer and will be paid for the three weeks he is on leave, but he is worried about how the lockdown will affect his future employment.

“I am just panicking. We will have to scramble to buy food, but I don’t know how long [the lockdown] will last.”

Conny Mahlawule, 47, from Jerusalema township, will continue her work as a cleaner at a bank in Waverley during the lockdown.

Each day she takes public transport from the impoverished community to support her four children. Her husband’s social grant is a second income for the family.

“I don’t mind working because my work is an essential one, but I am very worried that I will get the virus when I travel to and from work,” she said.

The only thing I can do right now is pray I get paid and that my job is secure until everything gets back to normal.

Takalani Muelelwa, 30, a machine operator at a factory in Cosmo Business Park in Roodepoort, said he had no idea how he would make ends meet during the lockdown. He lives in Cosmo City with his wife and daughter, and is the sole provider.

“We asked our employer if he would pay our salaries [during the lockdown] and he told us he was waiting to hear from the government to see what the government would do for his business.”

He, too, was worried about having a job after three weeks, as the little money he saved would not go far.

“The only thing I can do right now is pray I get paid and that my job is secure until everything gets back to normal,” he said.

“At the end of the month, my landlord wants the monthly rent. Imagine if I don’t have any savings and we don’t get paid.”

Ranjit Chowdhur, 36, originally from Bangladesh, owns a grocery store in Florida with five family members. He supports his wife and four children.

The family has closed the store for three weeks because of uncertainty about whether a foreign-owned shop could remain open during the lockdown.

“Now our biggest concern is the shop being looted.”

Minister of trade and industry Ebrahim Patel said on Wednesday that businesses operating as essential services, including foreign-owned businesses, must apply for a permit to operate during the lockdown.

On March 23, when President Cyril Ramaphosa announced the lockdown, he outlined a set of interventions to “help to cushion our society from these economic difficulties”.

These included a solidarity fund, financed by donations, to combat Covid-19, track its spread and help support those affected by it.

I am just panicking. We will have to scramble to buy food, but I don’t know how long [the lockdown] will last.

“Any employee who falls ill through exposure at their workplace will be paid through the compensation fund,” Ramaphosa added.

He called on large companies to pay workers during the lockdown and said the Unemployment Insurance Fund (UIF) may be called upon to extend support to workers and vulnerable firms.

He announced a tax subsidy of up to R500 a month for four months for private-sector employees earning below R6,500 under the Employment Tax Incentive. Ramaphosa said this would benefit more than four million workers.

Kith and pumpkin: dad squashes the scales but ...

Buyers beware, Magical Sea event may not be so ...

Mind the gap: why isn’t social distancing among the poor being policed?

If we, SA’s privileged, don’t give generously now, we will pay dearly later