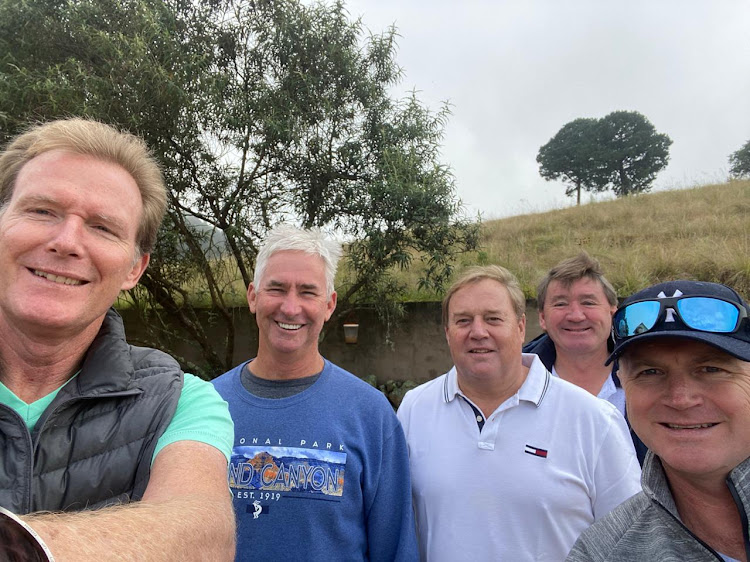 Five well-known Durban businessmen have decided to publicly disclose that they have tested positive for Covid-19 in an attempt to dispel the stigma around the pandemic that is gripping the world.

The group of friends have been holed up in self-quarantine on a farm in the KwaZulu-Natal midlands since March 9 and say the worst aspect of the infection has been their own uncertainty coupled with the reaction of others.

But they said the anxiety of not knowing how it was going to affect them and the general panic around it had the most profound impact.

The men, in their mid to late 50s, went on a skiing trip to northern Italy and, before they disembarked from their Emirates plane at King Shaka International Airport, had decided to drive directly to the Midlands.

They have since not been in contact with anyone but medical staff at Hilton Hospital and are living alone in a farmhouse owned by one of them.

Before they landed their families arranged for food and provisions. Their only outings have been to the hospital and occasional farm walks.

They have each had tests proving they are positive.

“We have all had similar symptoms, like mild flu,” said Chalupsky, a former champion canoeist.

It is more a fear of the unknown. Nobody knows how this is playing out.

“None of us has had a high temperature or a cough.”

Philps was the first to test positive. His brother Greg was on the same trip and flew back with the five but self-quarantined separately at home in Durban North where he tested positive.

On Friday, Greg received his first negative test result, much to the relief of his brother and friends on the farm in the Midlands.

He has had another test and hopes to receive negative results on Monday.

Returning, some of the men were fine, a few were a bit “off colour” and Greg initially had a scratchy throat, but felt “terrible” at Dubai airport.

On landing, the men were screened at the airport with temperature tests and a questionnaire.

None besides Greg presented any symptoms besides sniffles they associated with returning to the heat after the cold European climate.

Over the phone, Hampson’s wife had urged him to self-isolate, and his friends agreed it was the right thing to do.

For the first few days in the Midlands the men’s spirits were high, but as more news of the impact of Covid-19 spread, it  unnerved them.

But the impact of it didn’t really hit us until Richard got his results back. We were still hoping we wouldn’t be positive. Then it felt like our world fell apart.

Hampson said the group became traumatised when they heard the first South African who had returned from Italy (a Hilton resident) and tested positive.

“But the impact of it didn’t really hit us until Richard got his results back. We were still hoping we wouldn’t be positive. Then it felt like our world fell apart.”

Richard Philps was tested first (he had flu before he left) and only when his results came back positive did his friends also get tested at Hilton Hospital.

The positive results trickled in over the next few days. Philps said the friends realised “it is what it is and we have to manage it”.

While they tried to be realistic, uneasiness set in. Watching TV was “terrifying” so they turned it off.

They helped ease concerns by talking and reassuring one other.

“The anxiety has been the worst,” Chalupsky said. The men said it was mostly the fear of the unknown, not being sure if they were overreacting to symptoms. They have each had panic attacks.

Chalupsky was a high-performance athlete. He is fit, has had repeated exposure to high-adrenaline situations and is renowned for his calm.

On the farm in the Midlands, Louden noticed Chalupsky went dead quiet one day and walked out the room, visibly shaken.

However, the friends said they soon found relief in talking and sharing their feelings, which are compounded by isolation and the physical dislocation from their families.

At their best, there are moments of jovial banter and camaraderie brought on by a crisis.

Don’t be afraid of the virus, but you do need to be afraid of spreading it, says Andrew McPherson
News
2 years ago

At their worst, they are distracted by an angst-ridden swirl of incomplete or fast-changing news stories and apocalyptic images of people wearing hazmat suits.

The doctor who is treating the men in the Midlands advised them that if any one struggled to breathe they had to get to hospital – and that played on all their minds.

Loudon said one night he felt like he couldn’t breathe. But the Garmin Pulse Oxygen Acclimation monitor he wears showed that even when he felt short of breath he was not oxygen deficient.

His anxiety, while it passed after about an hour, manifested physically.

“It is more a fear of the unknown. Nobody knows how this is playing out,” Shwegmann said.

It has been an emotional rollercoaster, not least because the men have had only telephone communication with their wives and children, who have also been stigmatised by their infection even though they haven’t been in physical contact with them since their return from Italy.

Some of the families had been ostracised, becoming the victims of fear-mongering rumour.

Philps said since word had got out that they were infected they fielded calls from other people who had tested positive for Covid-19 (they know about 20 of them).

Most asked questions about symptoms. They have tried to assuage fears, given their collective experience.

“Everyone thinks you are going to die,” Hampson said. “They are understandably terrified. We took a decision to let our friends know and put it out there.

"Anyone who wants any information has called us. We’ve been like an informal helpline. There is a lack of information about how to deal with it.”

People seem mostly unsure of the incubation period and if the human body develops antibodies once one has been infected and then later tests negative.

The Durban men have treated symptoms with paracetamol and have observed a cycle with their infection: two days of flu-like symptoms, two days of normality and then two days of feeling unwell again, but not really sickly.

They have managed to stroll around the farm and have avoided strenuous exercise, as one would with flu.

“It’s a respiratory infection,” Richard Philps said. “You can feel your chest walking up a hill.”

The five men have been told they should be out of quarantine after testing negative twice, which in their case could see them home on Friday March 27.

They have each been phoned, some of them twice, by representatives of the National Institute for Communicable Diseases (NICD).

Greg Philps says he was visited by NICD staff in protective gear at home where he isolated in his cottage and his wife was the only other person at home.

“It’s really crappy flu, it’s not great, your body aches and then you get a tight chest. But I don’t know if that’s mostly in your mind because you are nervous. The hardest part is not being sick, it’s the stress.”

Virus may survive in air for three hours, on ...

SA builds 40km fence to trump any chance of virus ...