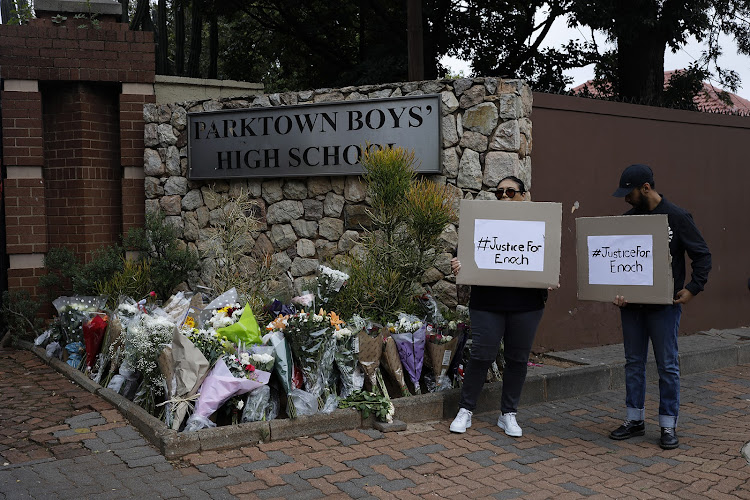 Outpouring People picket outside Parktown Boys High, where classes resumed on Tuesday morning following a day of counselling for those affected by the death of pupil Enoch Mpianzi.
Image: Alon Skuy

“This is not a dysfunctional school.”

This was how Gauteng education MEC Panyaza Lesufi ended Friday’s media conference on the death of Enoch Mpianzi, 13, a pupil from Parktown Boys’ High School.

But just a few minutes earlier he described how his department had intervened in 2018 to try to eradicate a “culture of silence” about abuse at the school.

The existence of this culture, entrenched for decades, became apparent during the trial in 2018 of Collan Rex, the school’s assistant water polo coach who was convicted of 144 charges of sex abuse and 14 counts of assault involving 23 pupils. Many of the cases dated from 2016 but only came to light much later.

“We may have changed it on paper, but the culture has persisted,” Lesufi said, explaining that the school’s code of conduct was amended to try to give the pupils an outlet to speak out against abuse.

Changes were made in the school administration’s personnel, including the appointment of a woman  boarding house head following complaints against the previous housemaster. But, Lesufi said, he was worried by reports he had received that pupils were still being told to keep quiet about misconduct.

The school’s unofficial code of silence was central to the case against Rex, who was jailed for 23 years.

He himself had been  a pupil at the school, and in 2009  attended a Grade 8 orientation camp of the type at which Mpianzi drowned this month.

That same year, 12 matrics at the school were taken to court by the mother of a pupil who said her child had been the victim of bullying and abuse during an initiation ceremony in which new pupils were smacked with hockey sticks. Her son was also allegedly forced to rub Deep Heat on his genitals. 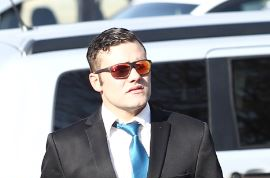 The report of a social worker who interviewed Rex during his trial said he was first exposed to the culture of physical and verbal abuse at the school during the Grade 8 camp he attended.

The trial court heard evidence of the enduring culture of silence at the school, and judge Peet Johnson cited it as one of the reasons Rex was able to get away with molesting boys for almost two years before being brought to book.

Lesufi said efforts to break down the code of silence would be intensified after the Mpianzi tragedy.

The MEC said the trip to Nyati Bush and Riverbreak lodge, near Brits in North West, had not been approved in advance by his department, and because of this failure to follow procedure he had suspended principal Malcolm Williams.

The school submitted its application to the education department’s district office on November 19 2019. However, the district office apparently failed to act on the application, and Lesufi said that as a result officials in the office had also been suspended.

If teachers hired by the governing body are brought before disciplinary hearings, this body will conduct the process.

“If the school governing  body chooses to dismiss these teachers, they won’t be able to teach anywhere else in SA,” he said.

“We must not lose hope … We are not in the business of shutting down schools,” Lesufi said.

“Many people are calling for a shutdown, but where will the pupils go? We simply have to remove [teachers and administration] who do not share the vision.”

Enoch was by no means the first to drown, so ...

Parktown sex pest victims: ‘I got suicidal and I ...

Lodge gates slam on Enoch’s parents, but their ...

It was ‘tradition’ not to take head counts, says ...

Yes, we want Cyril to get a spine, but we don’t want him to turn into Putin