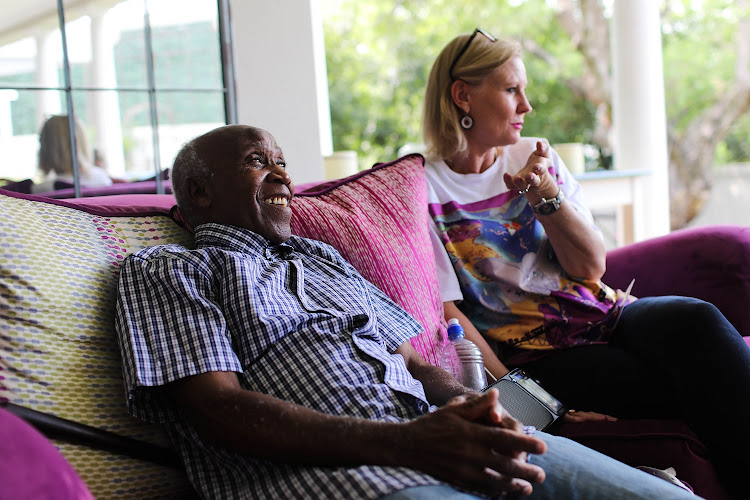 A LEGG UP Mbeji ‘John-John’ Dube, 88, reacts as Kirsten Legg, who took him in, speaks to Times Select about his compassionate nature.
Image: Alaister Russell

After three years on the streets of Sandton, or more specifically inside an electricity box, an elderly homeless man is living in a big home in the same affluent suburb after being taken in by the Legg family.

Kirsten Legg said: “Everyone has a story. We drive past the homeless every day and seldom interact with them. But John-John has been nothing but a blessing in our lives.”

Dube, 88, affectionately known as John-John, was originally from Plumtree in Zimbabwe, but at 21 he left to work as a builder in SA.

I love living here. I’m never leaving. I am happy.

In his 40s he became a driver, married and had two children.

But in his later years, he found himself estranged from his family and moved from Rustenburg to live in a backroom in Craighall Park, Johannesburg.

Three years ago the homeowner began renovating and offered to place John-John in a home for the elderly, as the room would no longer be available.

But John was stubborn about being placed in a home. So with no money for retirement, he found himself living in an electrical box on the corner of William Nicol and Cromartie roads in Sandhurst.

And that was where Legg first met him.

At the time she made a Facebook appeal to friends to help support the elderly man with donations.

“I met him three years ago. He’s made such a transformation. His handsome face was then covered by a long grey beard. I would take him food and blankets from time to time.”

Dube added: “I was well looked after by people in the community. Sometimes I would walk to [the nearby] Woolworths, and the [managers] were so kind. Without me asking, they would let me choose something to eat and drink.”

Legg said: “He was loved in the community, and that’s why, when we took him in, I left a note on the [electrical box] so friends would know he was safe.” 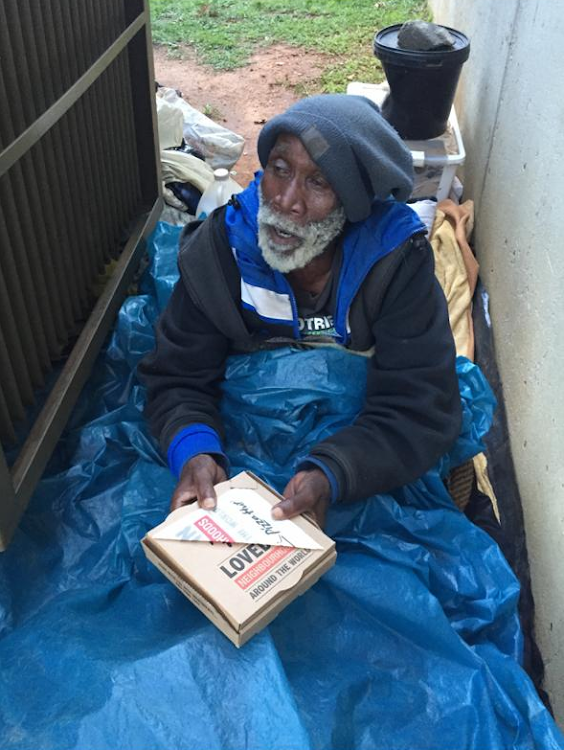 BEFORE Mbeji Dube in 2017 when Kirsten Legg first met him living at an electrical box in Johannesburg.
Image: Kirsten Legg

During the November storms that battered Gauteng, Legg could only think of the elderly man seeking shelter in the electrical box.

“I drove past and saw the storm had strewn his possessions into the surrounds. He was soaking. I took his things to clean and dry and told him if this happened again I would take him in.”

The following day the Legg family went to a Christmas party.

At about midnight, on the drive home, Legg asked her husband to drive past Dube to see if he was OK.

But he was not. And the sight of the elderly man wet and crying in the rain called her to action.

“I collected his things, everything in packets, and bundled him into the car. My husband was a bit shocked – he just sat behind the wheel white-knuckled,” she giggled.

Since then Dube has been doted on by the family and staff, who are fully supporting the decision to give him a home. Eventually, he will seek accommodation in an old-age home.

A specialist physician has declared Dube healthy, although his eyesight is very poor, and he sees a psychiatrist regularly.

After being reunited with his family, Dube also met his grandchildren for the first time. But his favourite companion is his radio, given to him by a friend of the family.

He sits in the lounge, or on the veranda listening to his favourite shows, and at night he retires to a large en-suite bedroom. 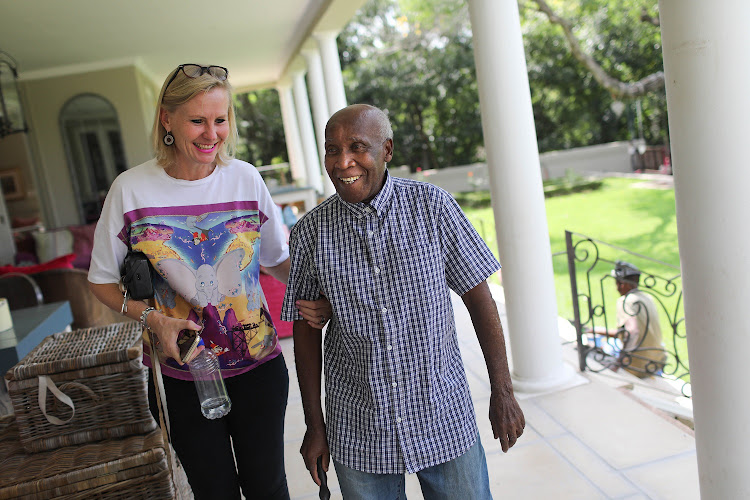 BY HIS SIDE Mbeji (John-John) Dube, 88, and Kirsten Legg share a moment on the veranda, where Dube enjoys spending warm afternoons with his beloved radio.
Image: Alaister Russell

Since taking Dube in, Legg has found a new calling – helping the homeless. She launched the charity Love is a Verb, which encourages families to support their local homeless community.

“With the situation in the country, everyone complains how bad it is, but not many people do anything about it. Not everyone can take in a homeless person, but everyone can help make their lives a little bit better.”

Love is a Verb will be teaming up with Cape Town organisation The Secret Love Project, founded by artist Michael Elion (of Waterfront sunglasses sculpture fame), to bring love stickers, sold by the homeless, to Johannesburg.

The idea is that locals purchase colourful heart-shaped stickers from the organisation to be sold in packs by the homeless. The packs cost R20, and the homeless keep all the profit.

“It gives homeless people a way to make money, and the colourful stickers can be used to beautify the city. The homeless newspapers are a lovely idea, but they often get wet and sellers lose their stock. This is an easy way for people to support the homeless in their community,” Legg said.