Huge tender decided in under two hours. Do we smell something ...

Huge tender decided in under two hours. Do we smell something fishy? 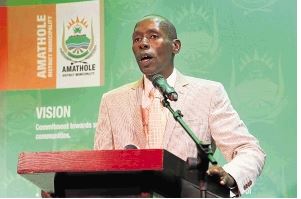 It took an Eastern Cape municipality just one hour and 45 minutes to receive four bid documents for a multimillion-rand integrated financial management IT system, register and appoint special bid evaluation committee members to peruse them, and then recommend the preferred bidder to the special bid adjudication committee.

This is according to a national treasury investigation, which also found that, on the same day, the preferred bidder, EOH Mthombo, was then recommended to the Amathole District Municipality’s municipal manager for appointment.

The speedy decision was taken on December 19 2014, in the thick of the festive holiday season.

But almost three years later, after spending more than R86m on the system, the municipality was still unable to use it, and continued to rack up losses due to late or incorrect statements being sent out by the malfunctioning system.

At the centre of the controversy is former ADM municipal manager Chris Magwangqana, who signed off on the contract with EOH Mthombo.

He later left the municipality and became municipal manager at Enoch Mgijima municipality near Queenstown, where he was fired in May in for, among other things, “misleading” the council over his failure to protect municipal assets from being auctioned off. Earlier in 2019 the public protector also found Magwangqana liable for R103m in irregular expenditure incurred by the municipality for a dodgy toilet contract.

In her report, public protector Busisiwe Mkhwebane said the contract had been handed over to the Hawks and the Asset Forfeiture Unit, and that the municipality should recover the funds from Magwangqana through civil litigation.

According to the treasury investigation, a 2012 audit by the municipality of its IT systems found it had about 27 operating systems. It then began looking for a new system and appointed EOH Mthombo on a three-year contract costing R75m.

“As at June 2018, ADM was still unable to conduct basic day-to-day functions of finance and accounting utilising the procured system, with severe consequences. The municipality was also incurring potential loss of income due to late and incorrect statements being sent to customers as a result of malfunctions. Despite these challenges ... the service provider had already invoiced the municipality approximately R127m.”

It goes on to say that the municipality had paid EOH Mthombo R86m and asked the Treasury to intervene in connection with the outstanding R41m.

The report recommended disciplinary action against implicated officials and that the municipality register a criminal case with police “for further investigation of fraud and corruption”.

EOH Mthombo is a subsidiary of JSE-listed EOH. Earlier in 2019 ITWeb reported that EOH admitted to almost R1bn in alleged fraudulent transactions with government departments, including over-billing and ghost contracts. ITWeb reported that the alleged wrongdoing was confined to EOH Mthombo.

Treasury spokesperson Malehlohonolo Kasa referred questions to Amathole. Municipal manager Thandekile Mnyimba said ADM had resolved to take the matter for a legal opinion, which was expected to be tabled in council after 30 days. He said the municipality was in the process of finalising a new service provider.

The company had “broadly and transparently shared the findings of this independent forensic investigation conducted by ENSafrica, into public sector contracts”, Newman said. Extensive information had been provided to the Hawks and the Financial Intelligence Centre [FIC], and the business was supporting and cooperating with the authorities.

“Further to this, a legal process in under way and as a result EOH is unable to provide further information in this regard,” Newman said.

Workers square up against transport department ...

How to squander millions: the tale of two broke ...

The town where children fight for a drink of ...